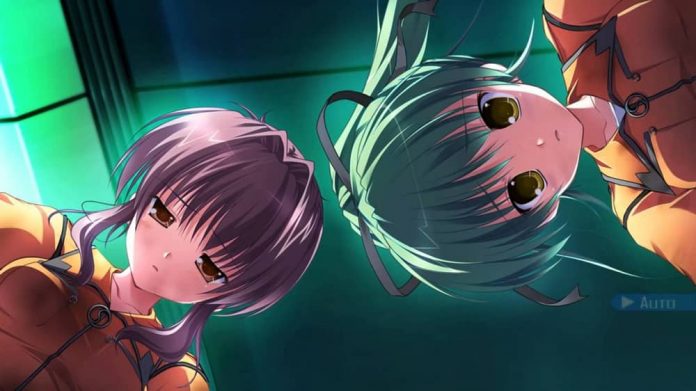 Visual novels are perhaps not the best known genre in the gaming world.

I myself have played only a handful, but I’m continuously impressed by them. Root Double- Before Crime: After Days Xtend Edition (to be shortened to just Root Double for the rest of the review) is a very interesting addition to the genre and features multiple endings and story twists that will not soon be forgotten.

Root Double, developed by Regista and published by Sekai Project, is set in September of the year 2030. It opens with a bang – quite literally. In LABO (Laboratory of Atomic Biological Organizations), a huge nuclear research facility where the game is set, an explosion goes off and suddenly the whole facility is engulfed in flames. Depending on which character you choose when the game starts, the story continues in two different ways. Your first choice is Watase Kasasagi, the captain of the fire rescue squad “Sirius”, or a high school student named Natsuhiko. My first choice was the captain and the story that preceded this choice was very interesting. Due to circumstances the player is only allowed very brief glimpses of, Captain Kasasagi loses his memory, thus the player gets to learn the background of the characters alongside him.

Due to their text-based, narrative-driven nature, the majority of any visual novel is generally spent clicking through dialogue which, if the story isn’t the best, can create some issue. Fortunately, the story of Root Double really kept me intrigued and I found myself flashing through the dialogue as quickly as I could to see what would happen next. The further you get, the more mysteries unfold, and the more I found myself falling in love with this peculiar world. The characters are mysterious, cute and weird which allows for a lot of fun with the story, but there are also plenty of serious conversations and moments to be had. 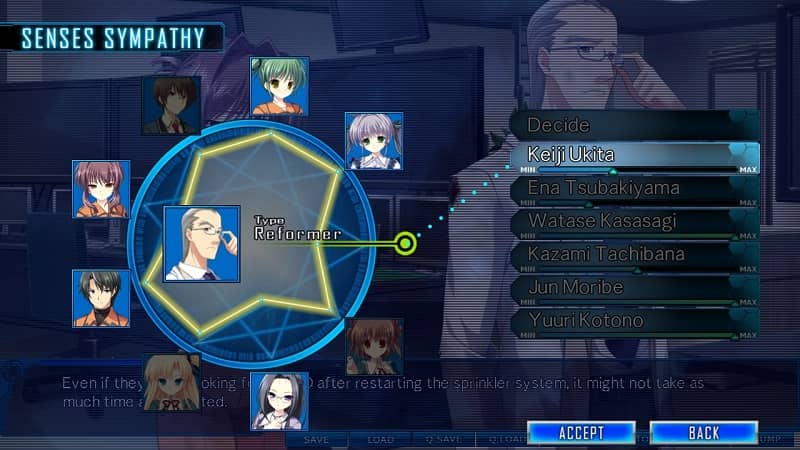 Aside from clicking through dialogue, the main mechanic of Root Double is done through the Senses Sympathy System (abbreviated to the “SSS”). This allows you to change your “impression” of another character as you play through the story. In order to do this, you’re given an enneagram – a personality assessor – that sorts people into one of nine different personality types. Root Double puts the nine main characters of the story (including your character) into these nine slots, and as your character meets the others you can slowly change your impression of them. If you want to be kind, you can move your enneagram more outward in order to show that you want to seem fond of someone. If you’d rather be more strict with a character, you can move your enneagram towards the center to show less fondness. The Senses Sympathy System seemed a little confusing at first because it did not seem to be making any difference on the story, but as I moved further along I could tell what a real difference it does make. It’s an interesting mechanic that gives Root Double a very unique edge amongst most other visual novels. It can seemingly have a drastic impact on the story as not only does it change how your character interacts with others, but it can also change their impression of you.

The art of Root Double is that of a contemporary anime – the characters and the background are all animated in full colour and frankly, look gorgeous. There is a specific background for each location that the characters visit. The game is also voiced by a full cast of Japanese voice actors who do a fantastic job of setting the tone for the story. The voice acting makes the game feel much more like an anime than it does a book or a manga. The characters’ mouths even move as their characters speak, lending even more to the anime vibe of the novel. 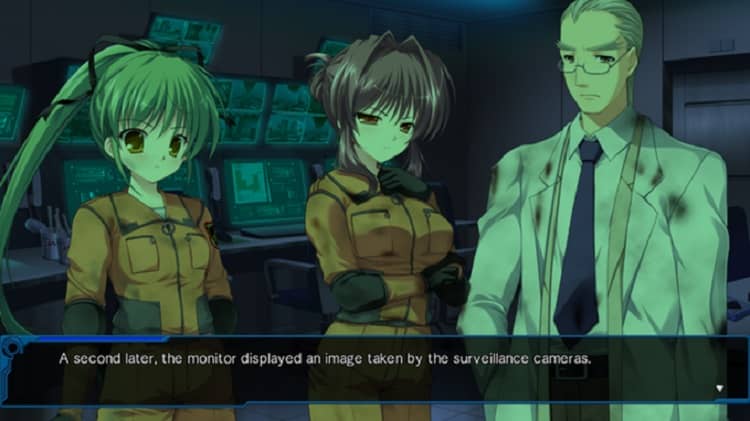 Even though Root Double- Before Crime: After Days Xtend Edition is a bit of a mouthful, I don’t think anyone would say that it’s hard to swallow – especially if you’re a fan of anime! The story is really interesting and pulls you in without ever really letting go. When you think it’s over you suddenly realise that you could play through it again to get a different ending. The art and voice acting wraps it up into quite a brilliant package. If you’re looking for a super casual, story-driven game to play when you feel like lazing around, Root Double is highly recommended.

Root Double- Before Crime: After Days Xtend Edition is available on PC.