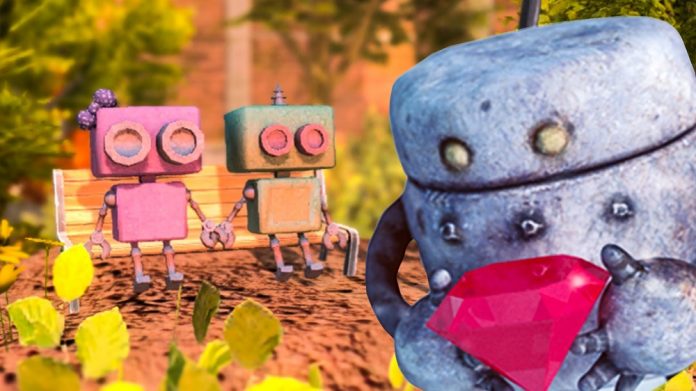 There are so many platformers out there today.

From Crash Bandicoot and Spyro the Dragon to more recent titles like Limbo, many platformers are uniquely different and fun in their own ways, and indie developers have taken the genre by storm. Scrap Garden is a 3D platformer developed by Flazm Interactive Entertainment and has a lot of creative elements that make it stick out. With a few minor issues that could be improved, Scrap Garden is still a wonderfully charming addition to the genre.

Scrap Garden tells the story of Canny, a robot who wakes up after having his battery changed, only to find out that all of his robot friends have been shut down. What on Earth happened? It’s up to you to find out why the robots are frozen in time and what happened to the rest of the city. Using only jumping and throwing mechanics you must traverse the terrain of the dead city, killing mutant animals and insects, and collecting shiny reds gems in order to try and find someone – anyone – that can help.

Scrap Garden shines in a lot of places. The introduction to the story is very well done and has you immediately feeling sorry for the lonely little robot. The music feels sombre and the frozen robots that you can knock over if you touch them add a suitably eerie atmosphere to the game. Once you get used the controls and realise that you have to collect as many gems as you can, the rest of the game feels particularly easy, but for some reason, I didn’t mind at all. Scrap Garden is the kind of game that you shouldn’t rush because if you do, you might miss something great.

The main portion of the game entails collecting gems and other items in order to continue on to the next area. To do this, you may have to get through a moderately difficult jumping puzzle, maybe take on a few scorpions or spiders by jumping on top of them, or even fight in a boss battle. You can also throw barrels and boxes to take care of enemies. What platformer would be complete without a little jumping on your enemies and throwing boxes? All of these possibilities are quite simple and won’t keep you busy for very long, but I still enjoyed searching every inch of the levels looking to see if I could collect every gem. 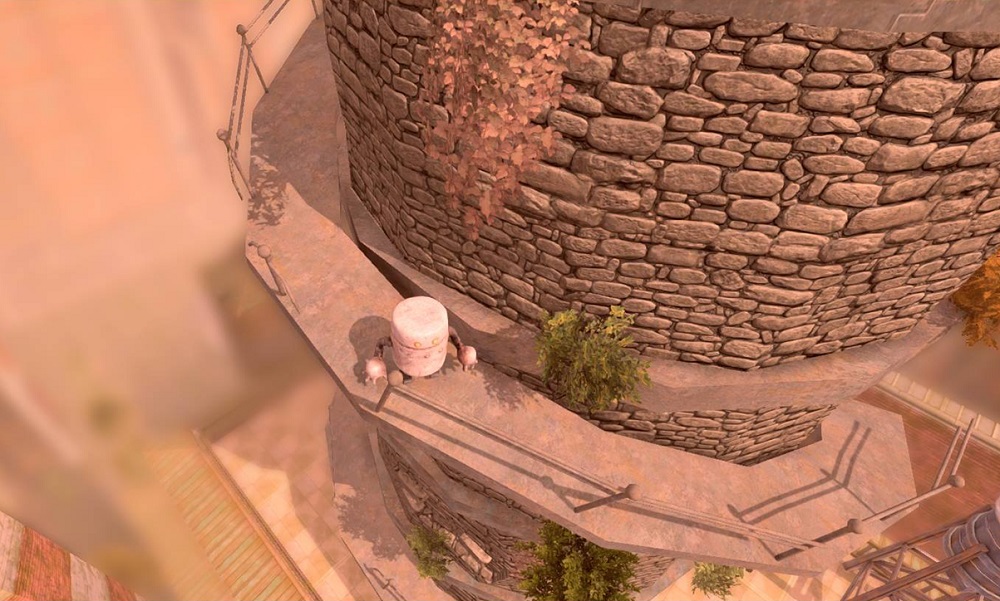 The main aspect that hindered the game – not considerably but enough that it should be mentioned – was the controls; specifically the camera. Due to the 3D nature of the game, the player is allowed to move the camera around freely but, to be honest, it was more like almost freely. At times, the camera was very jumpy, sticky, and just plain didn’t help the situation at all. At other points I found myself having a hard time jumping when I should have been perfectly capable. Altogether if the controls were tightened up slightly the game would feel much better.

What Scrap Garden boils down to is a simple platformer that can be fun for anyone who doesn’t take it too seriously. In a similar vein to LittleBigPlanet, anyone can play it and have fun with it, but children will probably get the most enjoyment out of it. The graphics may be sub-par, and the voice acting is only okay, but the simple game mechanics, interesting story and silly moments are where Scrap Garden is at its best. There’s even a level at the very beginning that scared the pants off of me. I mean, let’s face it, regardless of graphical quality, spiders are always scary. Why did it have to be spiders? There are tons of hidden gems (pun not intended) to be found in the big wide world of gaming out there and Scrap Garden is definitely one of them.

If you’re a fan of 3D platformers like Spyro the Dragon or Ratchet and Clank, I’d recommend giving Scrap Garden a try. Discovering the mystery of what happened to all the frozen robots while knocking them over so you can remember where you’ve been may be a messed up kind of bread crumb trail, but it’s fun nonetheless.

Scrap Garden is available on PC.