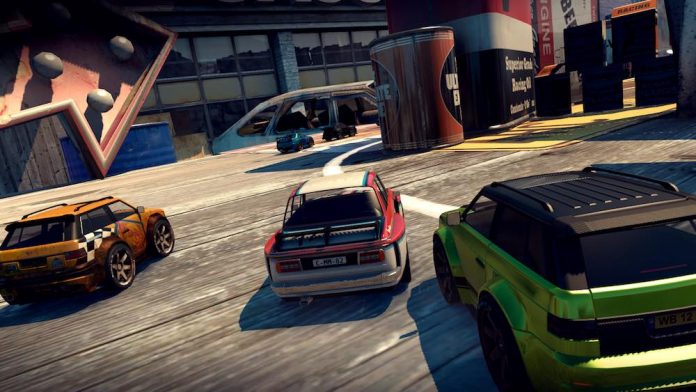 Current Playstation Plus offering and Micro Machines lookalike Table Top Racing: World Tour is the latest title from Nick Burcombe, a co-creator of Playstation stalwart series wipEout. But does his involvement necessarily bode well for TTR?

My first impression of Table Top Racing: World Tour was not great; the first thing I saw upon loading it up was a very large icon for a particular primarily UK-based sushi restaurant. “Wow. That’s a shame,” I mused. However, shortly after I began racing on the track, which was set on the worktop of one of their restaurants, I found myself eating my words (my words aren’t sushi though, so maybe the advert didn’t work). This level was good; enjoyable and well thought out. Sure, the numerous banners and brandings that you’d expect were present, but forgivable in this harsh modern world where smaller games or passion projects can’t release without sponsorship or DLC.

In this respect, TTR is actually pretty fair; you begin with enough coins (TTR‘s currency) to afford one of two vehicles from a set of four. These are the “Amateur” class, which are perfectly capable to begin with but, like all vehicles in TTR, they can be upgraded in various ways, which we will look at shortly. There are two further classes of Street Racers and Supercars which again hold four cars each, making a total of 12 cars in the game. Small differences in performance between them mean your choice will be made mostly on whichever you prefer the look of and each one can be given one of four pre-set paint jobs, for a price. This is unfortunate as the joy of a game like Micro Machines was in playing with different vehicle types, like a 4×4 or Formula 1 car. The difference between these classes is noticeable; once you’ve spent a while working through the Amateur class, the jump to Street Racers is appreciated, but you won’t be keen to drop back down as those cars now seem to run at a snail’s pace, so it’s best to win all three stars in each event as you go. 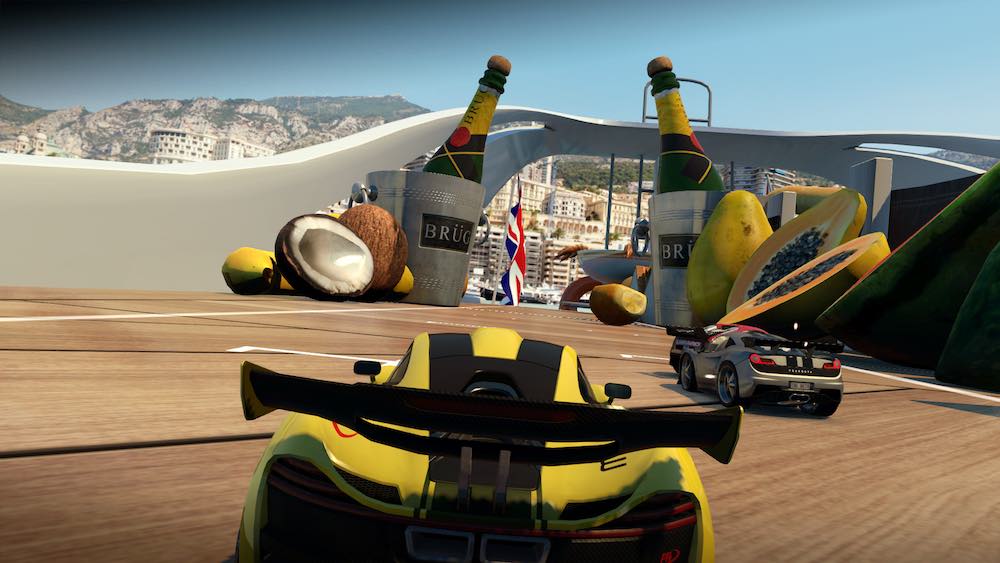 Once you’ve won a few early races, your coin balance will be looking pretty tasty, so naturally, you’re going to want to spend it. Head to your garage and each car you own has separate fields to upgrade speed, acceleration, handling or armour to defend from attacks. I tended to find that once I’d bought a car, I just waited until I could afford every upgrade all at once, as the incremental differences aren’t really noticeable. You can also purchase special wheel trims called “Wheel Weapons” which boost certain other stats like drift ability or reward you with more coins for winning races. But it’s not only the winning, but the taking part that counts, as coins are also rewarded for a podium finish or for other things like using weapons effectively against your competitors. All of these features feel like they could have been better, which unfortunately is the feel of this entire game.

The weapons and power-ups, collected by driving through floating blue bubbles, are not hugely imaginative either. Each bubble contains a random item; there’s a standard rocket launcher, oil slick and turbo boost as well as the slightly more exotic E.M.P bomb or the, to be fair, fairly amusing ice launcher which freezes any racer it hits for a brief moment, sending them skidding into the edge of the track – or if you’re really lucky, off of the table top entirely. The effects of these weapons are minor and only last for a very short time. A total of eight power-ups are available to you and once you progress, they can be boosted into super-weapons by collecting a second bubble – not that these super-weapons do much more than the regular ones, though. The lack of variety means races often feel the same, which isn’t helped by the small number of tracks available.

Each of the 20 “dynamic” circuits across the five different areas only provide an illusion of variety. The dynamic element simply adds a few variations which throw unexpected corners into level you thought you knew, but these small variations aren’t enough to prevent the tracks from feeling stale after a few races, especially as each event (Race, Combat Race, Time Trial etc.) is usually about half-a-dozen laps, lasting for about 30 seconds each. Though it should be said that the locations you play in do make the most of the miniature motors, asking you to dodge bread rolls at the marina or cans of spray paint outside the motor garage, even if these items (and the cars themselves) have a weird weightless feeling to them and so hitting them is pretty inconsequential.

This same issue plagues the music, too. Table Top Racing: World Tour‘s promotional material boasts of an “exclusive Breakbeat soundtrack by Wes Smith”. Not only do I not know what two of those things are, I also don’t much enjoy the result which is a basic, pulsing dance soundtrack that could be from any arcade racer. It’s certainly not Burnout 3: Takedown, as racing soundtracks go. In short, the music is inoffensive enough, but bland and certainly not remarkable. 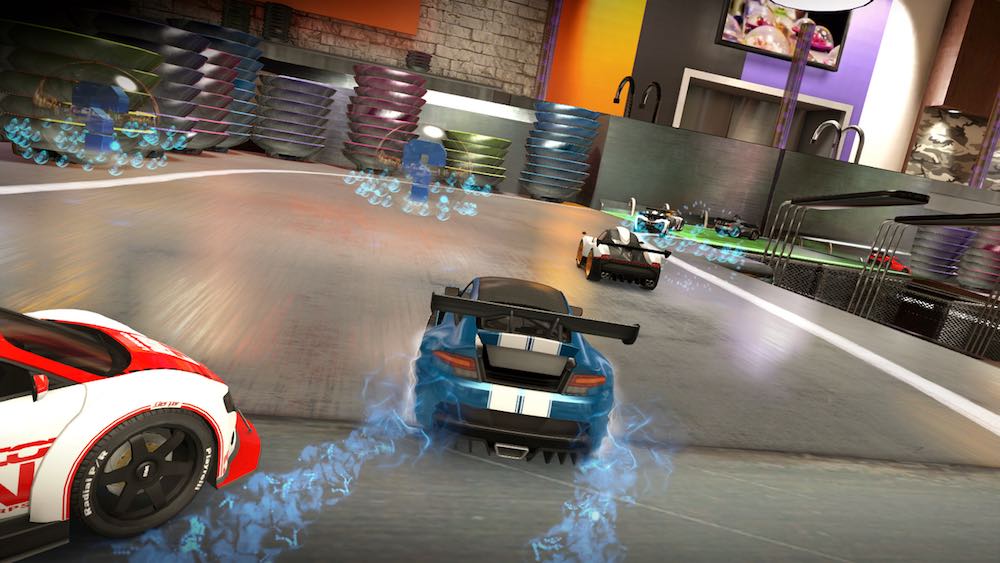 There’s also a challenge mode which attempts to add some lifespan to the game, but I couldn’t tell the difference between it and regular races. Given that each race lasts maybe two minutes, it feels repetitive very quickly.

Credit where credit is due, the stylised versions of real cars do look impressive and details such as the shadows from the cars and spare wheels flapping around on the back of the RVs are nice. I also previously touched on the environments; they are full of things to look at from a new perspective, such as giant Rubik’s Cubes and plasma balls scattered about in the 80’s playroom, or nuts and bolts littering the road outside the garage. These little touches are appreciated, it’s just a shame that the events taking place here lack any energy.

Table Top Racing: World Tour must have taken inspiration from classic Sega Mega Drive game Micro Machines and it hits a few of the same notes such as fun environments and cutesy cars and weapons to play with, but it lacks an essential frenetic pace and is stunted by the minimal number of vehicle or environment options available. As of now, there is a single DLC pack available priced at £5.79 ($8.49), which adds four new vehicles, a single new environment with four tracks and some special events, though I can’t help but feel that this early on, those extra items would have made an important difference to the game if they were included from the outset.

Table Top Racing: World Tour is generally enjoyable, offering occasional tense moments as you tussle with a competitor for the final lap, jostling for first place and trading blows as the finish line approaches, but these are much too few and far between. If you manage to make it into first place, that’s probably where you’ll stay, which presents little challenge and an overall lack of variety prevents this from being much more than a throwaway arcade racer. It also has no local multiplayer, which seems bizarre as it would really boost the game’s lifespan but hopefully this will come in a future update. Until then, you may as well give it a try while it’s on PlayStation Plus, however, Table Top Racing: World Tour remains an entirely forgettable experience, full of caveats and missed opportunities.