After reviewing CTU: Counter Terrorism Unit for the PC, I began thinking about all of the great tactical shooter games I had played over the years.

I ended up reminiscing about some of the best gaming experiences of my life. These experiences were both social and personal, remembering times where a group of my friends and I would storm a room in Rainbow Six together online, or I found myself alone in the long stretches of Delta Force, taking out the enemy one by one as a sniper from afar.

With the success of the latest Rainbow Six game titled Siege, there’s obviously still a desire from players to experience more tactical and grounded shooter experiences, in lieu of the popular arcade-twitch shooters such as Call of Duty. But what exactly qualifies as a tactical shooter? It’s not an easy discussion to define what a Tactical Shooter is, but mainly you’re looking for the use of: realistic constraints of player movement; realistically simulated ballistics and accuracy; squad based or multiple approach/style accessibility; and a low tolerance or low health realistic damage model. Basically, you usually move slower than most shooters, your accuracy is much lower and bullets drop over a distance, you usually have a squad to command, and all of you only being able to take two or three shots before dying.

Without further ado then, GameSpew ranks what we believe to be the Top 10 Tactical Shooters in gaming. Remember, “realistic” is the key word in case you missed it! 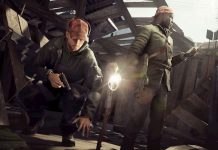