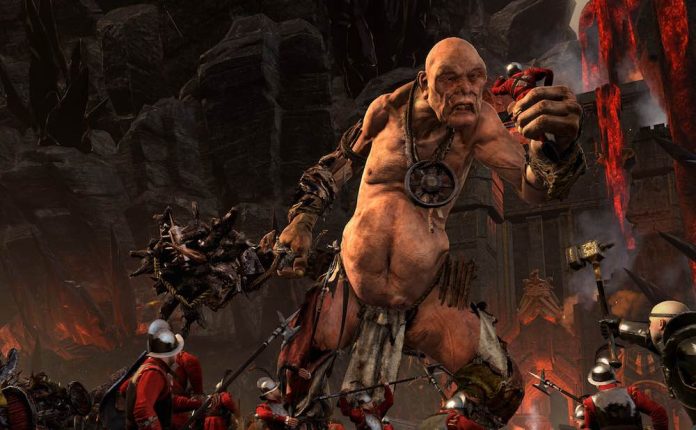 For a kid who spent hours lining up Risk armies to replicate historic battles, there was no more seminal a title for me than Rome: Total War.

Released in 2004, Rome set a high water mark for large-scale strategic generalship which other games would try and fail to reach, including all the other games which followed in the Total War series. Sure there were some decent ideas, settings and mechanics to be had in follow-up titles like Shogun 2 or Empire, but you’d be hard pressed to find someone who considered the subsequent games to outdo the splendour of Rome.

Flash forward to 2013, a full nine years later, when Rome Total War II slithered out of its loathsome warren. Like the Roman Empire itself, the Total War series had a few ups on its descending trendline, but Rome II represented a definitive nadir. Despite respectable critic reviews and a bunch of awesome mods which really saved it, the vanilla version was, to me, an absolute disaster. I had problems too numerous for this expository summation of Creative Assembly strategy titles, but the biggest problem was the crushing staleness which we were presented with. It just felt like nothing had changed over nine whole years.

So with expectations solidly cratered, here we have the newest member of the family in Total War series, set in the Warhammer universe. I must admit, the new setting is a much-needed gust of creative energy. It seemed a natural progression to go from dudes with swords hitting each other to dudes with swords hitting trolls and orcs. This isn’t strictly a reskin however; Total War: Warhammer does a nice job of making each of the playable races feel unique. Whether it be the zombie meat shields, the giant bats of the vampire counts, hulking centaur monsters for Chaos or punishing artillery barrages of Empire rockets, battling with each race feels pretty distinct, with defined and exploitable strengths and weaknesses. The visual diversity is greatly appreciated; having the Emperor fly headlong into a pack of poisonous dogs atop his griffon is refreshing after over a decade of swordsmen forming an indistinguishable flag-ridden pool of bodies. As usual, great attention has also been paid to the models; everything from the animations to the behaviour, sound and costume is crisp. Even the backdrops for the battles are much improved. I can say with some degree of comfort that this is the best and most inspired Total War effort in recent memory. 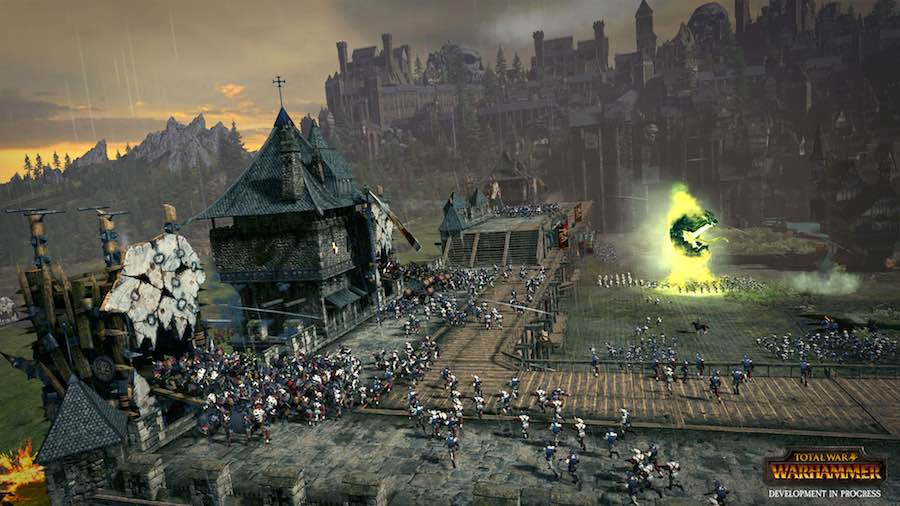 It needs to be pointed out however, this appreciable uptick in creative juices comes in part due to a long period of artistic hibernation. While these new Warhammer elements are welcome, more discerning players may note that the integration was less than thorough. An incomplete effort was made to really immerse the players in the world, and the more you play, the more apparent that becomes. While the hero units look awesome, we have about two lines as to who they are and what they want. The game attempts to shoehorn a few scripted battles and “quests” into the mix to give a semblance of “story”, but it’s an example of the laughably contrived methods attempted to give direction to the things you’re doing. Sure, you make your own story by choosing what to do etc. but this world is established and I’ve been plopped in the middle of it, playing an established hero. Historical games at least carry some intrinsic context, but here I have no idea who these people are or what they want, nor does it even feel like it’s that’s important at any point. Later in the game I was given diplomacy hits against certain factions for no reason. You never get any more motivation than that, so you’re essentially playing a dictator wielding a giant glowing weapon, determined to exterminate foreign cultures preventing your world domination for the sake of it. The game gets caught in a weird zone between open-ended and narrative-driven elements that annoy you like a fussy mother. Like I said, the new setting is a welcome change, but some effort into weaving the player into the world more completely or letting the player have more freedoms could have elevated Total War: Warhammer beyond well-executed genocide simulator.

When it comes to fighting/ playing the game, the mechanics are still there and the game runs smoothly and seamlessly. To the game’s credit, despite the lack of immersion, I was still reasonably engrossed in managing my unfounded conquests. There are some weird extortionary tactics which feel a bit cheap, but campaign AI is mostly serviceable, believable and challenging on harder difficulty. The map is also set up pretty well, creating for a nice ebb and flow and interesting conundrums/interactions. Battles feel better than ever to play out: ragged bodies fly during cavalry charges, individual units yell in panic; more things are happening than ever, making for a more organic and lively battlefield. Different faction styles/units, fair hero units, sped up pace and improved UI make this one of the more streamlined and friendly games of this nature. This is not overly surprising however, as much of what has made Total War good is only mildly modified from the numerous games of the past. Total War vets will be right at home here: most everything from battles to the campaign map, for better or worse, is going to give you that Total War déja vù.

“For better or worse, it’s back” is really my main issue with this game. Really, if I’d be lying if I said I was surprised, as “for better or worse, it’s back” really encapsulates my attitude with the franchise as a whole. The game doubles down on the mind-numbing simplicity formally codified in Rome II. I like the diversity of units between factions, but there are not a ton of options to choose from in each race. For example, the Empire units progress from spearman, to armored spearman to big spearman. I get there are balancing issues at hand, but that doesn’t stop games like Starcraft. It just doesn’t feel like there’s much you can do about how your army is constructed. This is probably exacerbated by the fact that besides a few hero abilities, all you can do with most units is right click and watch. It’s fine for novice/newer players but adding something simple to manage for advanced players, like shield walls for infantry or group bonuses for zombie hordes would’ve added a world of depth. Technology and upgrades are, again, woefully insipid, as 95% boil down to passive bonuses. Town upgrades are linear and extremely limited, making for a cookie cutter empire. Diplomacy is almost exactly as you remember it. Enemy agents are also back and annoying as ever. Once they out level you, they’re essentially an unmovable nuisance, as my newly spawned Witch Hunter found out after being promptly shot in the face minutes after graduation. Throw him on the pile and hope the next one makes it out of town I guess.

My criticism should not distract from the fact that Total War: Warhammer is a pretty good game. It’s relatively fun, polished, functions well, looks good and is even marginally better and more interesting than all the Total War retreads which have been unceremoniously squeezed out since Rome. The Warhammer elements infuse some much-needed life, one which I’m sure will be properly milked in DLC and sequels to come (40K Total War seems a foregone conclusion at this point). 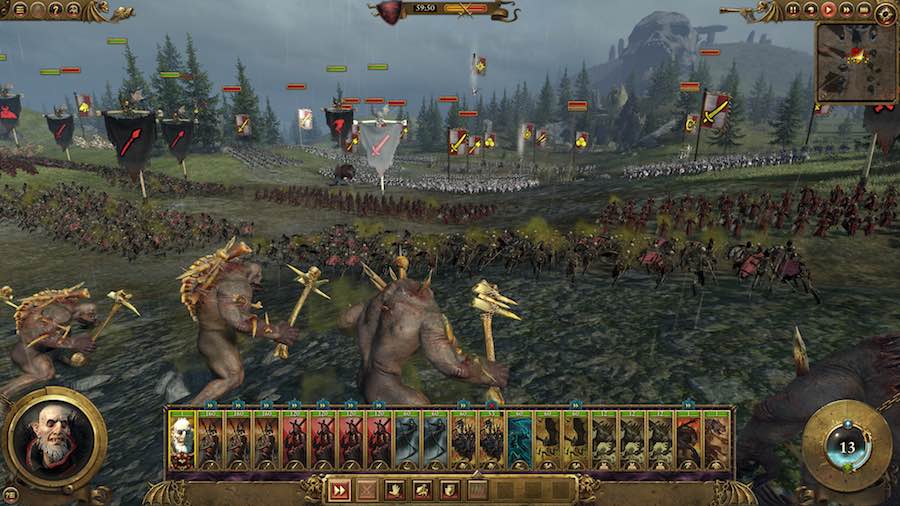 Make no mistake however, this is a short-lived transfusion at best. The sad underlying truth is that this entry does nearly nothing to advance itself as a game in the niche it monopolises. This is your grandmother’s Total War in nearly every sense, with nothing more than a fancy new dress. I suppose it’s unfair to ask for Total War: Totally Different if they continue to make money hand over fist and get 90’s from every major review site, but one longing glance back on Rome is all it took for me to appreciate the 12-year stagnation that seems to have chronically embedded itself. None of this criticism is by any means exclusive to this series or industry, and it wouldn’t be an issue if the series had no potential. But that’s the perpetually frustrating part of it all: they built an excellent battle engine and framework, but never bothered to do anything interesting with it other than tease enough potential for the next outing (except for Rome II which was trash). Ironically, 12 years ago I was lining up Risk figurines in my bedroom pretending to be a Civil War general and yet to this day I’m still building f*cking weaver huts in all my cities because there’s no better option than small income boost. My fear is that in another 10 years, we’ll all be building Littlefinger’s brothel tier 2 in every village because I got the 10% prostitute efficiency tech; extolling how after a decade of only “okay” games, this new Total War: Game of Thrones is the best one yet.

Yeah, Total War: Warhammer is pretty good and a step in the right direction to boot, but I refuse to be dazzled by some stickers when the core game takes only a tiny shuffle forward at best.