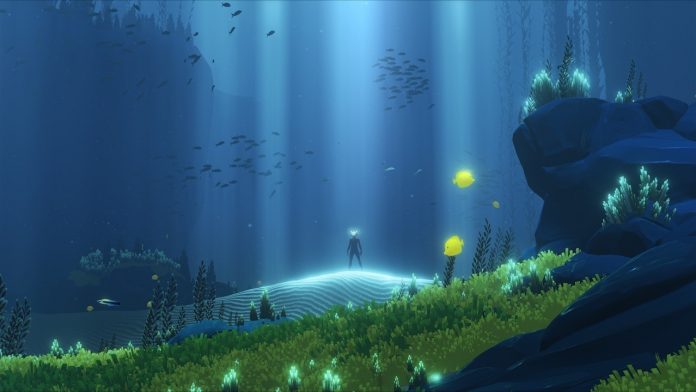 Giant Squid’s a newly formed independent studio led by none other than Journey’s former art director Matt Nava. They’re working on a gorgeous looking game called Abzu that fell victim to the hustle and bustle of the heavy hitters at this years E3. But now the waters have settled, it’s time to dive straight in and draw your attention to arguably the most beautiful game at the event.

According to the developers over at Giant Squid and 505 Games, Abzu derives its name from “the oldest mythologies”. Ab is said to mean “water” and Zu means “to know”, so combining the two we get Abzu meaning “the ocean of wisdom”. A little intrigued, I decided to do a little digging around (typed “Abzu meaning” into Google) and found the term embedded in Ancient Mesopotamian Religion and culture. Skipping a vast amount of context and detail that’ll make any historian begin to clench their jaws and wrench their hair out, “Abzu” is a name for the primordial ocean below the void space of the underworld. In Sumerian culture, a deity named Enki had a temple named Abzu that translated to “house of the cosmic waters”, and in the Babylonian creation epic Enuma Elish, “Apsu”, as he was referred to then, was a primal being made out of fresh water. That’s not all, he had a lover named Tiamat who was the primordial goddess of the ocean that eventually gave birth to some of their godly offspring. Intriguing.

In Abzu you take control of a diver who explores the ocean, interacting with the schools of abundant sea life whilst soaking up the stunning seascapes. But it’s not just a game where you cling onto dolphins and headbutt mackerel, maybe marveling at how pretty the sea bass are; it’s full of dangers that “lurk in the depths” and in the heart of the ocean there’s said to be some “ancient secrets that lie forgotten”. In the trailer we see our acrobatic diver taking a gander at some rather Ancient Mesopotamian inspired inscriptions. At one stage a brief blip of recognition is emitted from their head and they dash off with such vigour that it’s obvious they’ve figured something out. And right at the end we witness a giant triangular seal opening, followed by some music that inspires strange wonder. Perhaps we access the ancient cosmic waters? Maybe we bump into the embodiment of the ocean and discover the secrets of its creation? I’m hoping the entrance leads to a gigantic deity named David Attenborough.

There’s an element of mystery to its looks and that’s something I can’t wait to unlock. I also can’t wait to swim with killer whales and befriend a hammerhead.