Reviving old favourites seems to be a bit of a theme on the Nintendo 3DS at the moment; just the other day I reviewed the rather good Sssnakes.

I can only assume that this has been brought on by the huge success of the Sega 3D Classics series: there’s always somebody looking to cash in. Just like Sssnakes, Digger Dan DX is a clone rather than an official remake of an old classic, but this time the game in question is First Star Software’s hugely successful dig ‘em up Boulder Dash, which itself got a remake for iOS and Android a couple of years ago. Question is, can it hold a candle to the amazing original?

First of all, I should probably mention that the developers Four Horses haven’t tried to add enhancements, new features or spectacular 3D effects like many of the other classic game updates on the 3DS; for all intents and purposes, Digger Dan DX is just Boulder Dash with a new skin. For those that don’t know, Boulder Dash was originally released for the Atari 8-bit computer in 1984, taking elements from popular arcade games such as Dig Dig and Mr. Do! and adding in a few features of its own to create one of the most popular computer games of the mid-eighties. It ended up appearing on every system under the sun, and was so popular in fact that it also ended up being turned into an arcade game too: one of very few computer games to receive that treatment.

So I suppose I better give you the bottom line on Boulder Dash – or should that be details on Digger Dan DX? Well, it’s all one and the same: you control a little chap buried deep underground in a diamond mine and you must collect all the gems before making your way to the exit. Sounds simple, right? Well, it would be if there wasn’t a wide assortment of obstacles standing in your way. Firstly there are some big heavy boulders blocking your path, which you will need to move but be very careful because if one of them drops on your head or rolls into you path then it’s splat; game over! You also have to be cautious of exactly where you move them to, because you could inadvertently block another route that you require. Secondly you are not the only one down the mine; there are also lots of nasties who are intent on killing you. Thankfully, they follow set routes so avoiding them isn’t always that difficult – and you can also drop rocks on their heads to kill them. 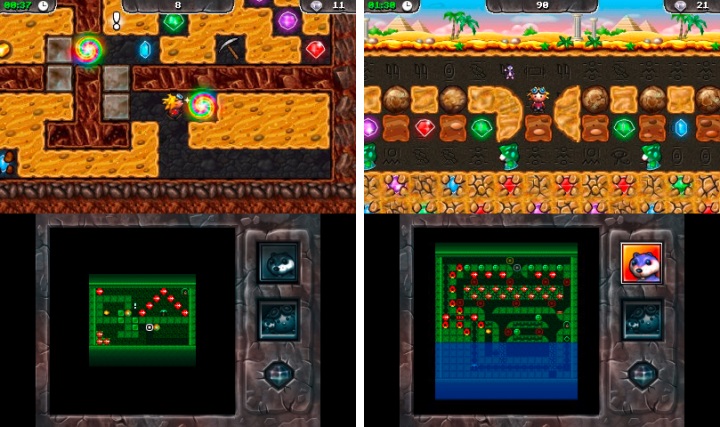 The last kind of problem you have to face are the mines themselves: each mine is set out like a maze and get more complex as the game progresses. Sometimes a level can only be completed by following a very specific route: one wrong move and you have to start all over again. This is probably the most frustrating aspect of Digger Dan DX (and the original Boulderdash for that matter); if you make one small mistake then you have to start the level over. There’s no “lose a life and just carry on where you left off” here.

Digger Dan DX does add a few small elements of its own, but nothing hugely exciting. There are secret gems, that can be discovered for a bonus, a pet gopher who can crawl through gaps too small for you on some levels, and boxes of TNT that can be used to destroy walls and kill enemies (or yourself if you mess it up!). As the levels progress – and there 100 of them – some other small hazards are added in, such as flooded chambers and more aggressive enemy types. You can also upgrade your pickaxe, Minecraft style, to make it more effective. I should also mention that Digger Dan DX adds time limits to each level too, and they are incredibly tight! Sometimes it seems impossible to do it under the allotted time, but thankfully you can still finish the level if it runs out (good job really, considering!); you just forfeit your bonus.

It may sound like Digger Dan DX has a lot of new changes on paper, but in actual fact they don’t really add up to a great deal: this is still very much Boulder Dash in a new skin, not that that’s a bad thing of course. However, there is one major factor that hinders the enjoyment of Digger Dan DX somewhat: the crazy difficulty spikes. The first few levels are ridiculously simple and act as your tutorial; this would be fine if the difficulty curve gradually went up from there, but it doesn’t. All of a sudden you will hit a stupidly hard level, and then when you eventually complete it you get a really easy one again – it’s almost like some of the levels are in totally the wrong order.

Graphically, Digger Dan DX is nothing to write home about. It looks nice enough but was definitely designed with the 2DS in mind. The audio is pretty lacklustre too; there’s certainly nothing memorable, so headphones won’t really be required here. The important part as always though is the gameplay, and Digger Dan does mostly get this right. The controls are tight, especially if you use the more precise D-pad, and there is certainly an addictive quality too it and plenty of challenge there with so many levels. I also liked the map feature that makes great use of the bottom screen. It just all could have been executed much better – the difficulty spike and constant need to redo levels after small mistakes does get a bit grating. Even so, it’s hard to be overly harsh on Digger Dan DX because of the price: it can be purchased for just £1.79! That’s certainly cheap enough for every Boulder Dash fan out there to pick up, and probably cheap enough for most 3DS owners to consider.