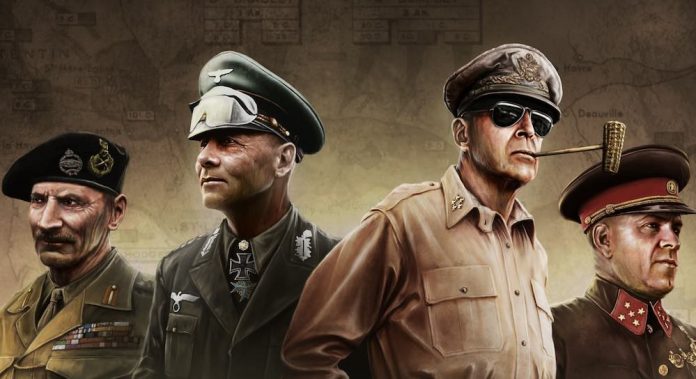 At the heart of Paradox Interactive titles is freedom.

Freedom to give every lord in Italy syphilis, to conquer the known galaxy with an army of enslaved fungus, to kill every man, woman and baby that stands between you and the Hungarian throne. The game and the systems in place had rules but would not hinder your imagination too much. Yet, at the core of Hearts of Iron IV, for the first time, I felt my ambitions caged in.

Being unacquainted with the Hearts of Iron franchise, the best frame of reference I have is Europa Universalis IV, and sadly that is not a favorable comparison for Hearts of Iron IV. In classic Paradox format, you once again take control of one of the nations of the big dance to leave your distinctive mark on both your nation’s progression and the fates of the countries around you, this time in the WWII era. How you go about accomplishing this all relies on your management, but what exactly you spend time managing depends on which game you play: in Crusader Kings you manage the drama of lords and ladies, in Stellaris you wrestle with resources and policy, and Hearts of Iron you’ll be tinkering with your war machine.

From the first whistle, me and this shift in focus started butting heads. You still have some freedom in what you do, but I noticed it’s all in the uninteresting aspects; at the expense of more engaging options which are unceremoniously de-emphasised and stripped down. For example, you have extensive control of your nation’s manufacturing, and can dynamically control the flow of supplies and equipment available for deployment. This in of itself is fine, but as a balance, the trading system is now woefully simplistic in comparison to something like Europa Universalis IV. Combat planning is strongly encouraged, as there are a number of tools used to create elaborate invasion strategies and movement schemes. It’s a bit clunky to use and somehow never quite looks like what you want, but it’s nice to have some agency in this department. However, diplomacy is the most basic I’ve played of any of the Paradox games. The options you have to interact with other nations are boiled down to bare minimums, but it’s almost fine because the need to have more in-depth interactions is rendered unnecessary since the the sense of you existing in a semi-plausible, intertwined world just isn’t there. Actions never feel impactful because reactions to them are sluggish and small. If you became a land-grabbing maniac in the world of EU IV, especially somewhere as reactionary as central Europe, you could expect to friends to quickly sour on you and gigantic confederations to immediately rise to put you in your place. Apparently not so much in the 1930’s. It’s not just the Nazis; playing as an ultra-aggressive Hungarian nation who gobbled up every nation not nailed down still could barely annoy any of the neighbours. I get the complacency of post-WWI Europe, but it’s not a compelling game when there just don’t seem to be a lot of consequences. 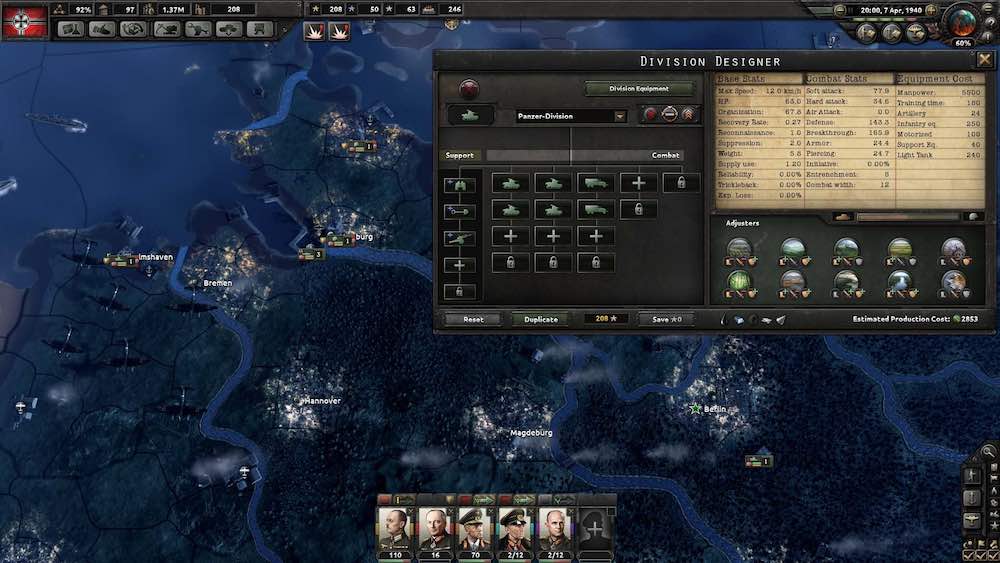 Along with planning, the makeup of your armies can get extremely detailed now, and you have tons of control in regards to composition of regiments and divisions. There are a staggering number of stats to sift through and optimise if you like that sort of thing. Combined with tactics, you really have a lot of control over what sort of army you want and how they conduct themselves. Regardless of whether you prefer to pound the enemy with extensive shelling, play defence or move with lightning-like speed, you can morph your generic army into the specialised force your country needs. The payoff is the technology trees. Every country has access to essentially the same technologies. Sure, there are distinct units, Germans have Panzers etc., but there isn’t a whole lot of difference between armies. What’s more is that for all the planning, tactics and stat tinkering you do, I found that I got comparable results from simply moving my death blob armies in a beeline toward their capital. Army composition doesn’t seem to matter all that much so long as you’ve got more bodies to throw. Your plans and schemes also don’t ever seem to be fully carried out by the AI when you hit that execute button so you end up having to constantly re-order stragglers back into the fray.

The bigger sticking point comes in the national focus trees. These are essentially your nation’s direction, but the options are extremely restrictive in scope. Many of these choices force events, like treaties or opinions boosts, but all this does is make for some pretty arbitrary, forced and often binary directions for your country to have to move in. If I want to get my army more experience or boost fascism in my government, I’m not sure why a treaty with Japan necessitates that. This is limited to the major players however, and while I’m impressed by some of the background work that the developers did in researching, I’ve always enjoyed playing the little guys and sadly they were completely neglected. Beyond having access to riveting options like “Light Tank Manufacturer”, every non-major country is stuck with a generic focus tree, so essentially the only difference between nations is starting location and initial size. It’s frustrating to me to see that in the past each nation at the very least got a regional tech ladder and some leeway to really craft an individual nation. But regardless if you play Mexico or Tibet, you can easily end up with the exact same tech structure. 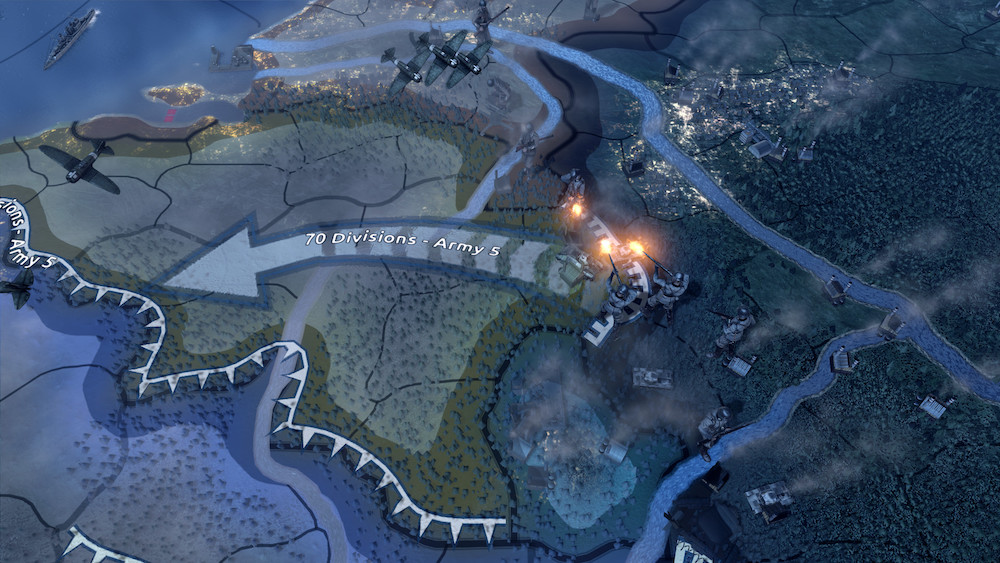 Beyond mechanics, even the smaller little details that make Paradox games that much more enjoyable just never materialised for me in Hearts of Iron. Gone are the witty idiosyncratic dialogues and choices. Instead I’m notified about my growing agitations toward other nations via dry copy/paste fake newspaper stories which are the same every single time. This is just symptomatic of the game being completely humorless. You could say that given the subject matter that’s fair, but let’s face it, things like colonisation or the Crusades are equally unsavory and yet they were given some moments of levity in the past. Every nation just seems cold and lifeless; I never felt like I was really erasing or engulfing a distinct nation rather than just another blob of space. The leaders representing their people are sadly boiled down to stock images and maybe a passive bonus. You would think that being led by someone as charismatic and insane as Hitler would have some impact on how you play but it really doesn’t. I also noticed that there is extensive recycling of generic advisor photos. At one point I had five advisors who had the exact same generic Asian face with a different colored suit, which is equal parts funny and racist. The UI is pretty annoying also; while in Stellaris I had no problem navigating to and fro, each action in Hearts of Iron IV feels clunky, out of place or unintuitive.

At the end of the day, Hearts of Iron IV was just not a game I looked forward to playing. Sure there are some elements of goodness: having greater control of your army and production is a welcome addition and you still do have some control about where you want your fascist Australian empire to expand to next, but these inclusions shouldn’t have to be at the expense of diplomacy or wit. Ironically, the cold inflexibility of Heats of Iron IV makes it slightly more realistic at the expense of more fanciful fun. I’m sure some WWII enthusiasts and military logisticians will appreciate the level of optimisable detail of armies and their behaviour, but for a general audience, the managerial emphasis is in all the wrong places.

Hearts of Iron IV is available on PC. 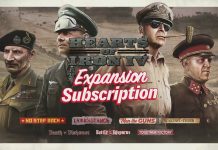