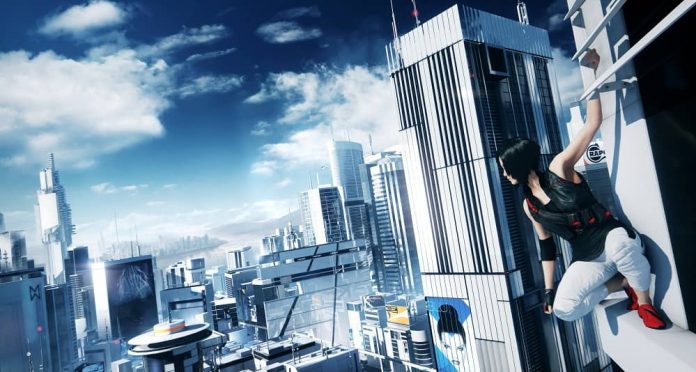 Starting this review, it made me feel very old when I realised that the original Mirror’s Edge was released nearly eight years ago. Developed by EA DICE, more commonly known for the Battlefield franchise, Mirror’s Edge was breath of fresh air in an industry full of gruff men with guns, putting us in the shoes of a lithe young woman called Faith whose greatest asset was her agility.

Unfortunately though, despite being quite warmly received by critics and securing a place for itself in the hearts of a legion of gamers, sales fell short of what was expected. Years went by, and whilst sales did eventually nearly meet expectations, undoubtedly due to price reductions and word of mouth about its unique gameplay, the chances of a sequel building on the solid foundations of the game seemed criminally slim. It was wondrous news then, when a new Mirror’s Edge game was announced in 2013. Now finally available to players around the globe, Mirror’s Edge: Catalyst still puts us in the shoes of seasoned runner, Faith, but it isn’t a prequel or sequel. Taking the vital core concepts of the original, namely the emphasis on fluid movement and striking visual style to aid gameplay, Mirror’s Edge: Catalyst reboots the story entirely, fleshing out Faith’s personal struggles and introducing to us an expanded cast of supporting characters along the way. Oh yeah, and did I mention that it’s all encapsulated within an open world?

Whilst the idea of Mirror’s Edge’s distinctive gameplay married with an open world sounds great on paper, unfortunately the results aren’t quite as impressive as you’d expect. Or at least they’re not evidenced in Mirror’s Edge: Catalyst anyway. The expansive yet tightly designed levels of the original are thrown out of the window, replaced instead with a number of relatively brief story missions that never prove to be as challenging, engaging or heart-pounding as any of Mirror’s Edge’s succinct offerings. That’s not to say that they aren’t still somewhat enjoyable though; just that they never reach the heights you’d expect from a sequel to a game that showed room for clear growth. More irksome is that between missions you spend too much time running the same old routes, back and forth through environments that feel lifeless and where the scenery is all too samey to make exploring interesting. Of course you can always use the unlockable fast travel points to cut out some of the mindless meandering, but it’s hardly the ideal solution to a problem that could have been solved with better world design – or by simply not making the game open world whatsoever.

It doesn’t help matters that Mirror’s Edge: Catalyst’s main story is also unmoving and disappointingly flat. Thrown into conflict with the clichéd megacorporation KrugerSec that’s vying for control of the entire city of Glass, you’ve also got to deal with your troubled past whilst skirting your affiliations with the almost terrorist-like group Black November. It all flies by at a pace that makes it near impossible to care for any of the characters involved, and to be honest, even if it was slowed down a little to allow for more development, the characters and story would still be duller than dishwater. Saying all that however, maybe I’m wrong? Maybe by buying the Mirror’s Edge: Exordium comic that the loading screens frequently inform me will shed light as to how Faith ended up in juvie at the beginning of the game will make everything fall into place? The cynic in me tells me otherwise. 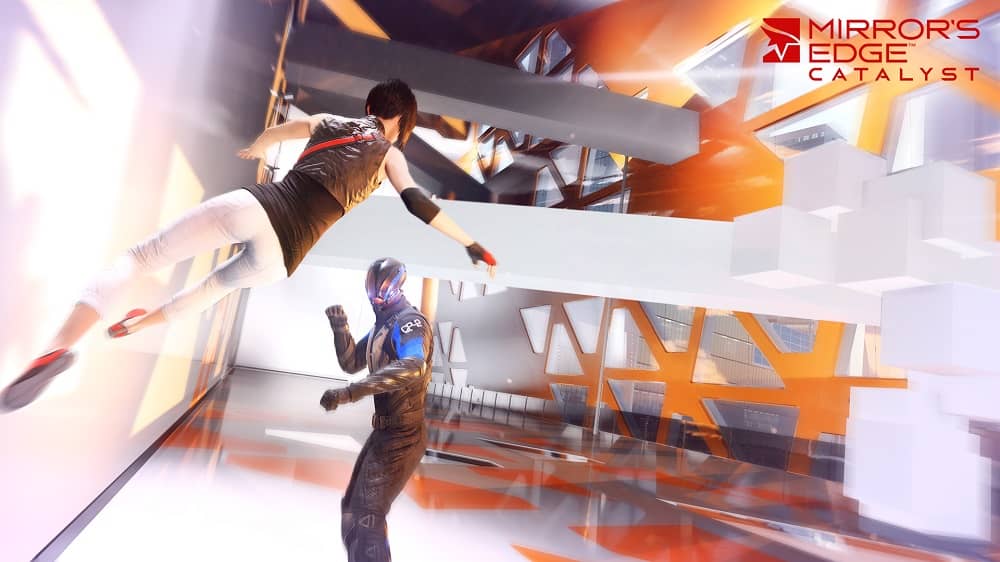 There’s no doubt that the best way to enjoy Mirror’s Edge: Catalyst is to sporadically engage in the story missions whilst tackling the plethora of diversions that you encounter on your travels. As you’d expect from an open world game there are huge number of activities to complete ranging from time trial-like Dashes to more substantial side missions provided by support characters, and whilst they all add some much-needed meat to the game’s barebones narrative carcass, many of the extras on offer just feel underdeveloped, repetitive and ultimately frustrating. Completing deliveries and creating diversions for fellow runners for instance, both come with very strict time limits; so strict in fact that just one miniscule mistake can mean the difference between success and failure. It wouldn’t be so bad if restarting whatever activity you’re doing was near instantaneous, but the longish load times quickly grate when multiple attempts are required. Those that aren’t too keen on mindless collectathons may also bemoan Mirror’s Edge: Catalyst‘s huge number of microchips, gridleaks and documents to find, all offering a negligible boost of experience for your troubles but little else. And then we have the small number of security hubs that need decommissioning, requiring Faith to first defeat a small group of KrugerSec officers with woeful combat.

Like in the original Mirror’s Edge combat is best avoided where possible, although quite occasionally it is forced upon you. This wouldn’t be too much of an issue if Mirror’s Edge: Catalyst‘s combat system was intuitive and enjoyable, but the truth is it’s just not very good at all. On a basic level Faith is able to perform light attacks, which can be strung into a short combo that is ineffective on most enemies, and heavy attacks, which are strictly one hit affairs but are much more potent against all enemies. Combat for the most part then relies on using hit and run tactics to take out enemies, pressing the heavy attack button in conjunction with the left stick to direct their resulting stunned stagger and hopefully leave them open to further attacks. Rather comically, any enemy hitting a wall or other object in their stumbling stunned state often suffers great damage, despite displaying a considerable lack of momentum, and Faith also has no qualms knocking enemies over rails and off of the top of buildings, likely to a particularly gruesome death. The latter is a highly effective way of dealing with those that stand before you, but it hardly feels in keeping with Faith’s pacifistic characteristics. When standing toe-to-toe with a group of enemies is a poor option due to them being armed or particularly skilled, it’s necessary to use Faith’s agility to her advantage, building up a bullet resistant focus shield by using her traversal skills whilst also trying to find opportunities to land flashy and highly damaging attacks from the air. Adding some much needed variety to the combat when you get the slim opportunity to use them, attacks stemming from vaults, wall runs and zip lines are highly effective, and also land with a satisfying impact. 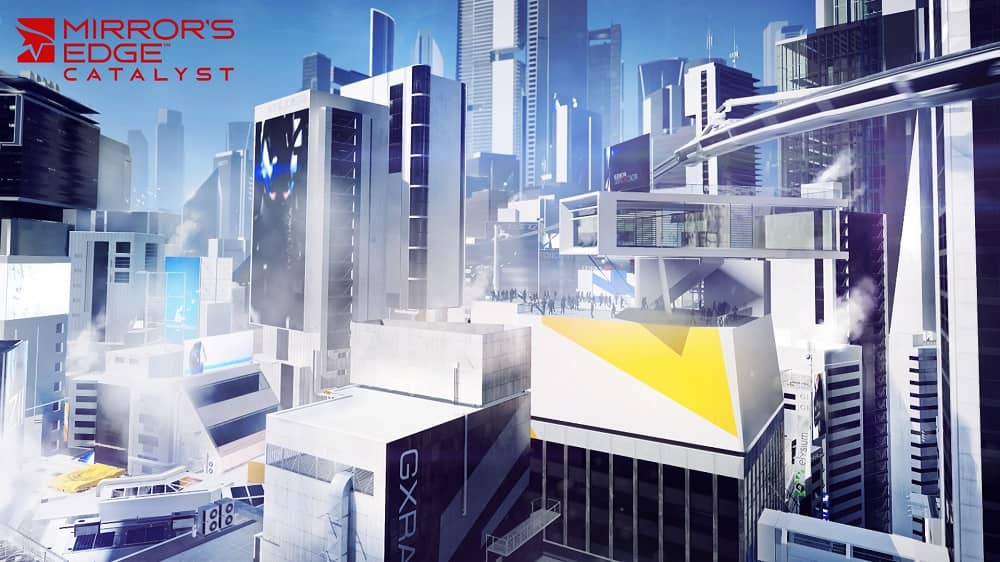 It’s fortunate that movement, or rather the fluidity of it, is Mirror’s Edge: Catalyst’s strongpoint, as it is absolutely pivotal to the general enjoyment of its gameplay. When you’re able to run, jump, slide and climb your way throughout the levels and open world unhindered, Mirror’s Edge: Catalyst can be an absolutely pleasure to play, making you forget about many of its shortcomings. The traversal system is not flawless however, and sometimes it can feel like the controls let you down when attempting a treacherous wall run for example. Luckily then, whilst falling to your death is an inevitability that will occur many times, at least it you’re usually able to resume play back where you were just before you died, albeit with a pesky loading screen to endure beforehand. It’s also a let-down that despite being open world, many missions and activities require you to take a highly prescribed path, often accompanied with a strict time limit, limiting your movement options and ability to explore. If you do ever manage to get stuck, or, more likely, grow frustrated at the frequent trial and error nature of the gameplay however, you can use the handy Runner Vision which highlights a clear path to your objective, but it feels like cheating and doesn’t make up for what is essentially poor mission design.

Mirror’s Edge: Catalyst is even a little disappointing in the visuals department. Forgetting about the repetitiveness and lifelessness of the environments for a moment, it’s clear that there’s strong art design behind it all, combining clean lines with bold colours to create a world that feels clinical, cool and futuristic. There are also one or two areas late in the game that offer some real eye candy. Unfortunately though, it shows that the game is not running at a native 1080p, with an abundance of aliasing on display and a generally blurry image. The faces of NPCs are particularly off-putting, being both flat and blurry. No doubt concessions were made to ensure a consistent framerate, which is admittedly very smooth, but there’s still the odd hiccup here and there. Perhaps some will be relieved to hear that the soundtrack at least is very atmospheric and complimentary to the game, but yet again, it never matches the heady heights of the tracks featured in the original Mirror’s Edge.

As you’ve probably already gathered, Mirror’s Edge: Catalyst is quite a disappointment, although that’s not to say that it can’t be highly enjoyable at times. When everything comes together as intended and you’re able to make full use of Faith’s repertoire of traversal skills without issue, there’s simply nothing else out there quite like it apart from its predecessor. Unfortunately, there are too many frustrations and banalities that break any prospect of enjoyment in the long-term. This is not the tight, structured experience that the original Mirror’s Edge was; more of a similar but heavily diluted one that offers more longevity at the cost of gameplay. In the end however, even though diluted, the essence of Mirror’s Edge is still there, making it somewhat worthwhile for ardent fans of the series to pick up. Everyone else may want to wait for the inevitable price reduction, or maybe even stick with the original title which can be played on Xbox One via backwards compatibility.

Mirror’s Edge: Catalyst is available on PC, Xbox One and PS4. We reviewed the Xbox One version.