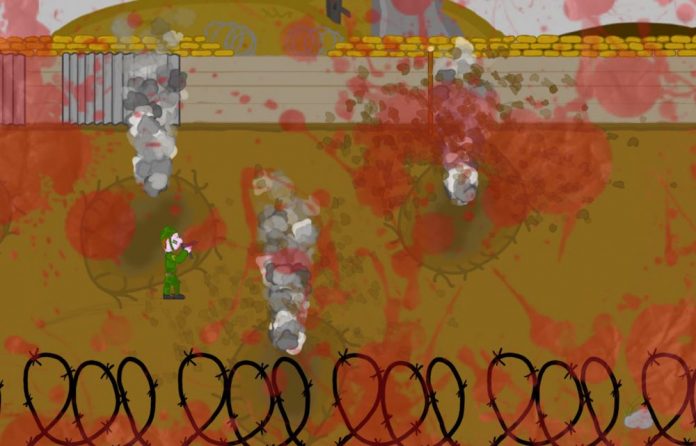 In a sense, NotCoD doesn’t much satirise the modern shooter genre as it does simply mock it. Despite some expertly clever writing and the occasional genuine laughs, it falls short of understanding what a video game satire should even be and instead finds itself somewhere in between an insult and a downright bad game.

The first glimpse into the world of NotCoD seems promising. A scrolling wall of narrated text that initially looks off-putting redeems itself by establishing the game’s tone of fourth-wall breaking self awareness. Calling itself an “affectionate” parody of the Call of Duty series, British developer Not Games reinforces that the game is most definitely not an Activision shooter, if there was any confusion. Its menu screen gives taste to what kind of a game you’re in for, feeling reminiscent of early browser-based flash games or Xbox Live Arcade Indie titles. Rough around the edges doesn’t quite do it justice. It’s almost amateurish at best. That sentiment is only compounded when entering the game’s campaign.

Seemingly drawn in Microsoft paint, the game’s artistic aesthetic is disgusting upon first glance. While it’s possible that the visual style is simply part of the joke as it continues to make light of the giant budgets that AAA shooters seem to require, it’s disingenuous to call it anything but a concession from its developers. Characters are animated simplistically with rotating limbs and bouncing moustaches to convey conversation as you make your way through paper cut-out levels.

The game’s sound design is a much lighter note, thankfully. As it continues the game’s objective of conveying a sense of being hobbled together haphazardly, no sound is recorded. Instead, everything is done via someone making noises with their mouth. Guns go pew and explosions on boom as a plethora of onomatopoeias are thrown at the player. It gives a charm that is lacking from the rest of the game, both thanks to its annoyingly half-baked visual style and its cynical approach to the medium. 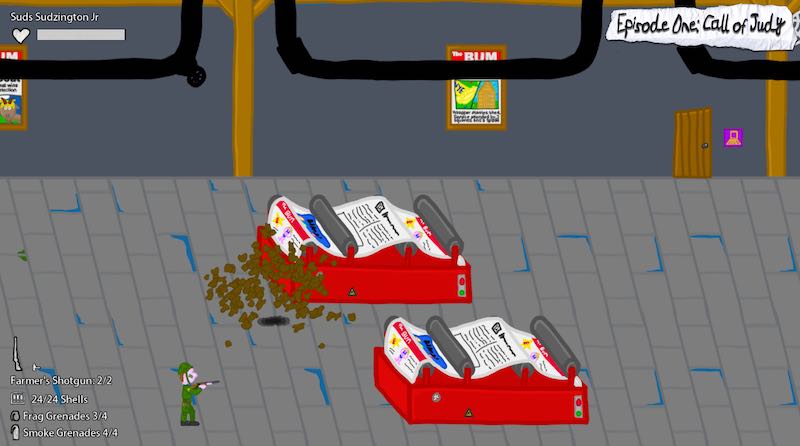 NotCoD‘s brand of parody falls more on the South Park end of things rather than Mel Brooks or Monty Python. If you’re quick to offend however, be aware that the game is packed full of unabashedly offensive scenarios. Gunning down boy scouts, Catholic nuns, and even helpless bystanders is par for the course during the game’s not-so-lengthy campaign. Yet somehow, no matter what kind of humor you ultimately enjoy the game has a surprising amount of biting criticism underneath its façade of game parody. Taking on everything from British bankers, the church, and even Jimmy Savile, it’s undeniably British in its attempt at both humour and commentary to the point of throwing some jokes right over the heads of its international audience. It’s surprising to find such on-the-nose satire in a game filled to the brim with crude and sadistic humor, making the comparison to South Park all the more appropriate.

If only Not Games could properly convey that same level of satire to the game’s mechanics, which unfortunately seem oblivious to the games it is making fun of. Instead of becoming another first-person shooter, it opts to take a less on-the-nose position feeling more like Postal than Call of Duty. While looking like a sidescroller, NotCoD plays more like a twin stick overhead shooter. Many studios have taken the formula before to wondrous results but thanks to ridiculously messy controls and overly simplistic enemy AI, the game feels boring even with its often hilarious writing to accompany it.

For most of the game’s campaign, NotCoD can practically play itself. It’s not too upsetting, as it points a spotlight onto its much more appealing aspects. However, it never feels fun to play. Enemies move very simply, either throwing countless hordes in your general direction or simply barring your progress through a few cannon fodder. It can become frustrating as you move through each level without any investment other than the anticipation of the next joke to entice you, however as you progress deeper through the game it becomes ever more difficult to play. As if the developers chose to save every interesting idea for its end, the game’s final chapter is jammed with different ideas such as branching pathways and explorable areas to the point of overflowing. It’s here where the control scheme truly shows its faults as well, while increasingly powerful enemies mean you have to manage your ammo appropriately. In any other game, it would be something you’d become accustomed to. Yet NotCoD chooses to force you to deal with its clunky controls in amidst the chaos of its late-game action. Moving out of the way of bullets while throwing grenades and shooting enemies can become dizzying, and is a, maddening final hurdle the game forces you to make before progressing to its conclusion. 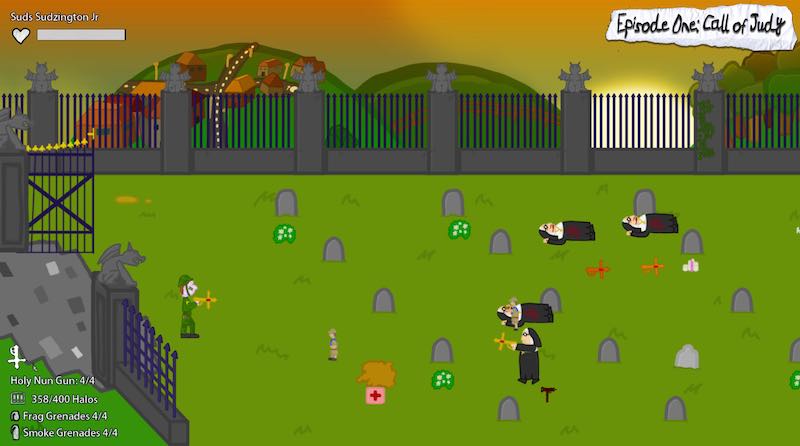 The pacing of the game is also awkward as it seems more concerned with feeding you jokes than providing any reasons to continue playing. Level to level progression feels stumbled into without much reasoning or explanation besides a short quip from your superior. It’s hard to tell if this was intentional; an attempt to add to NotCoD‘s constant cynicism towards other first-person shooters. Nevertheless it only adds to an agonisingly dull game that, thankfully, can be completed rather quickly.

There are few games that shoot for the stars and somehow stick the landing. Even fewer still that decide to make no daring decisions at all. Yet NotCoD can’t be blamed for being unambitious. It’s a small game that was made quickly, probably so its developer can move onto the next genre to spoof. While it does offer a campaign mode and a similar “zombies” mode, both are completely unaware of what makes shooters fun. Or maybe it’s just that they don’t care. Like a student that has potential but continually turns in bad reports, NotCoD feels irritating to play. The only reservations anyone should have after putting it down should be if it was even capable of being anything more than the unimpressive slop that it is.

NotCoD is available on PC.