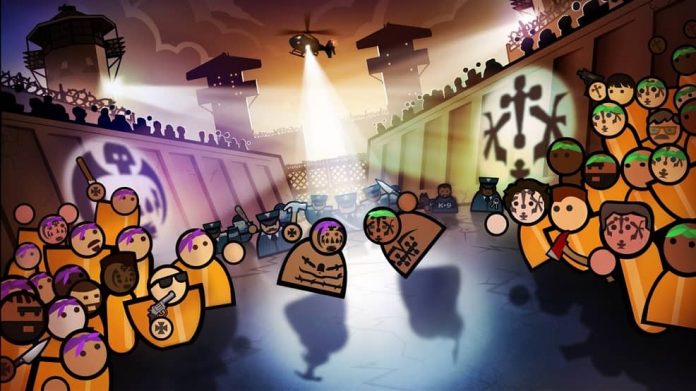 As a young’un, one of my favourite games was Bullfrog’s Theme Hospital.

There was something incredibly rewarding about building your own hospital from the ground up, seeing patients be cured (or die in the corridors), and not to mention the constant funny quips from the receptionist. There’s been plenty of sim games released over the last 19 years since Theme Hospital first came out, but somehow none of them have quite captured the magic of that classic. That is, until now, with Double Eleven and Introversion Software’s release of Prison Architect.

It’s not about hospitals anymore; it’s all about prisons. Build and manage your prison however you see fit; build comfortable cells for your inmates or make them as harsh and cold as you like. Feed, clothe and reform your wee blocky criminals by building all the facilities that you need to make them better members of society when they eventually get released. Or perhaps you’re more in favour of capital punishment and would rather send them to the electric chair? The power is yours.

After releasing to critical success on PC last year, Prison Architect is now available on Xbox One and PlayStation 4. The console release has had a facelift, with a refreshed UI more suited to console playing, added difficulty options, on-screen hints and tips as well as the addition of two extra modes: Warden Mode and World of Wardens. On top of the already feature-rich PC release, it makes for an incredibly worthy title full of extra features.

The first place you’ll start when loading up Prison Architect is in “Prison Stories”. Essentially a story mode that doubles as a tutorial, Prison Stories takes you through five chapters, each narrating particular events that happen in your prison. For example, the first chapter, Death Row, tells the story of Edward, who is currently awaiting the electric chair. Through detailed tutorial, you’re gradually introduced to the basics, with each chapter adding in more functionality until the final chapter straight-up asks you to build your own prison from scratch. Working your way through Prison Stories will take around 4-8 hours, depending on whether you want to stick around to do the optional objectives that are offered to you. Once you’ve finished, the prison you’ve built in chapter five is available to continue with in the main meat of the game, the sandbox-style Architect mode. 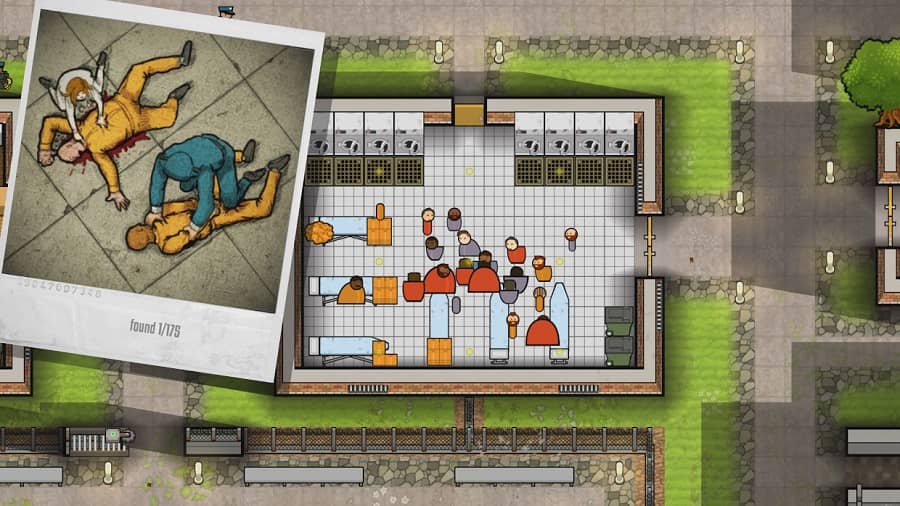 Prison Stories does a great job of giving a lowdown on the basic tools and systems that you’ll use throughout your time with Prison Architect, but being thrown into the main game with little guidance is still daunting for the uninitiated. Although presented with a fun and cartoonish veneer, Prison Architect is serious business with lots of facets and options to get your head around. You’ve got staff to hire and manage; a plethora of buildings to create; research to be done; inmate needs to monitor; their daily timetables to schedule; finances to balance – and that’s all on top of an active, high-security prison to run and monitor. Without enough security and suitable punishments, prisoners will get unruly, smuggling in weapons and attacking staff and fellow inmates. Even worse, they could start a riot and take control away from you, requiring the riot squad to come in and restore order. Play the game too strictly however and they’ll get depressed. There’s a careful balance to strike; creating the optimum prison is a very fine art.

The modes new to the console release of Prison Architect, Warden Mode and World of Wardens, offer a quicker way to jump into the main sandbox gameplay. In Warden Mode, you can choose a pre-existing prison and get straight on with managing it rather than having to build it yourself from scratch. There are 10 prisons available in the game, each offering different designs and strengths. World of Wardens is an online function that allows you to share your prison designs with other players, as well as access a library of downloadable prisons. Unfortunately, this is locked beneath a registration for a free Double 11 membership. It’s not the end of the world, but for those of us reluctant to sign up to services with our emails and personal details, it’s rather annoying that you can’t just dive straight in.

Whether you choose to build your own prison from scratch or start with a pre-built design from Wardens mode, you’re in the game for the long run; Prison Architect doesn’t have an end point. It’s up to you to keep playing and managing your prison as well as possible until, ultimately, there are no more improvements you can make. At that point, you can sell your prison for a lump sum or head back to the drawing board to start the process all over again. Thankfully, for those of us who like a little bit of guidance, both Architect and Warden mode have a handy objective list to keep players on track of what needs to be done within their prison walls. When starting a new game, you also have complete freedom to tailor the difficulty level to suit you. There are three preset difficulties, but these can be altered by customising options such as starting money, prison size and toggling fail conditions on or off. 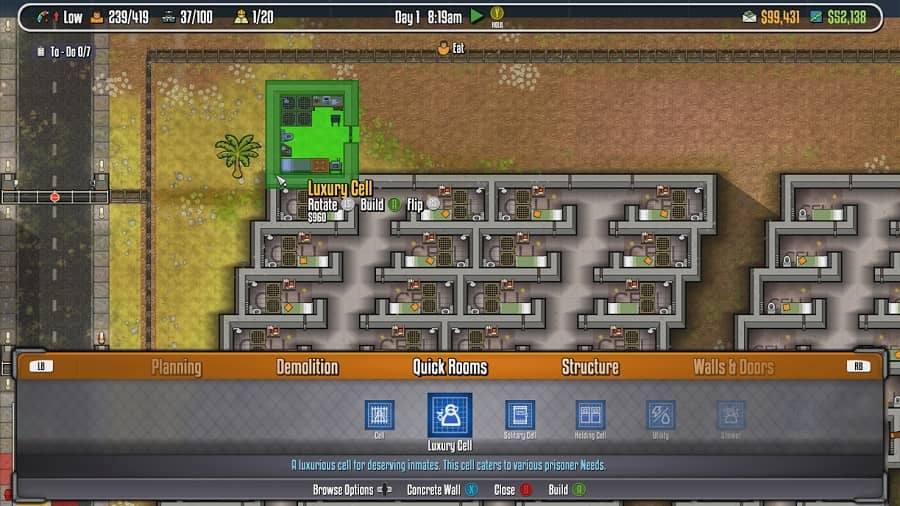 If you don’t like any kind of hand-holding however, then you’re free to take the reins and design your prison however you see fit. There is an awful lot of depth to get your head around, and even with the help of the objective list, it takes some time to learn all the ins and outs of the game. Whilst Prison Stories takes you through the essentials, there are some elements that aren’t covered – and undoubtedly, some things you’ll have forgotten by the time it comes up in your Architect or Warden Mode game. An easily accessible help guide would be a massive benefit to refresh your memory on what each option in the menu does.

Unfortunately, I encountered a few glitches whilst playing Prison Architect. Occasionally, workmen would get stuck whilst doing a job and seemingly the only way to free them was to fire them. Bits of construction work would inexplicably get missed too; when building cells, occasionally a section of wall would be missing once the job was apparently completed. Neither of these things are game breaking, of course; irksome at worst, but not enough to hinder any enjoyment from the game.

It’s safe to say that Prison Architect isn’t a game for everyone; if you’re not a fan of building and management simulation games, then there’s little that will sway your opinion. For those that do enjoy them however, Prison Architect is one of the best. With incredible depth, a wealth of modes on offer and practically unlimited replayability, there’s little to dislike about the package on offer. The architect versus management aspects of the game are very well balanced and integrated, and fulfilling both roles simultaneously is intuitive and enjoyable. The extra features in the console version are worthy additions, making this a worthwhile purchase even if you’ve already sunk hours into the PC version. Whether you’re more about tough love or laissez-faire, give Prison Architect a go. Those hardened criminals aren’t going to reform themselves.

Prison Architect is available on PC, Xbox One and PS4. This review is based on the Xbox One version. 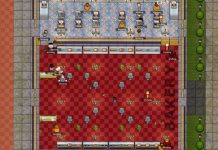