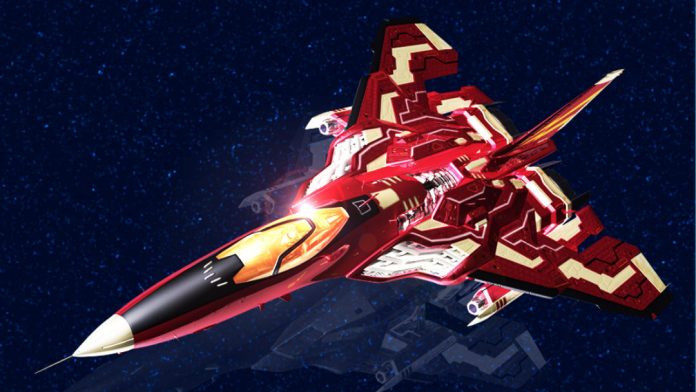 For fans of the vertical scrolling shooter genre, the Raiden series, originally created by Seibu Kaihatsu before being bought and continued by MOSS, is a bit of a highlight.

Tasking you with taking control of a powerful supersonic attack fighter in the fight against an alien race called the Crannasians, there’s a good reason why they’re held with high regard too: they’re bloody gun fun to play. Well now Xbox One owners get to bask in the glory of the newest entry in the series, Raiden V, and unsurprisingly it doesn’t disappoint.

The main focus of Raiden V is its story mode, in which you must blast your way through eight stages eliminating the alien threat as effectively as possible. Of course, you also score points for your shooting endeavours, and with greater rewards for those who deal with enemies quickly, players are forced to consider their positioning and possibly take risks to eradicate their foes in a swift manner if they want to maximise their score. Whilst a single playthrough takes around an hour, Raiden V employs a branching structure which alters stages to a certain extent based on your performance. Essentially then, whilst you only ever play through eight stages in one run, there are actually 27 all in all for you to discover, and once you’ve done so you can start the game from any of the stages you’ve completed  in the future. The branching structure may not be a ground-breaking feature, but it’s a nice touch nonetheless, and it adds some longevity to the title for those that want to experience all the stages.

Raiden V’s gameplay is just as you’d expect for a vertically scrolling shooter. After choosing your preferred supersonic fighter from a choice of three, each with their own parameters, you also get to choose which weapons to engage the enemy with. One Vulcan, Laser and Plasma weapon must be chosen before you can speed into action, again from a choice of three in each category, all with their own individual strengths and weaknesses. With your selections made, you’re then thrown headlong into an alien onslaught in which your ability to dodge barrages of coloured bullets will well and truly be tested.

Depending on the difficulty level you’re playing on, some enemy projectiles may be nullified with your own shots, but on the whole you’ve got to finely hone your manoeuvring skills to stay alive or use your limited number of available bombs to clear the screen of danger. Most of the serious threats to your supersonic fighter’s shields will occur when taking on the massive bosses at the end of each stage, but by learning their attack patterns they can always be obliterated without suffering any harm. Worry not though if you’re terrible at scrolling shooters; with infinite continues available from the outset, you’ll be able to complete Raiden V on any difficulty level if you have persistence – you just won’t score very highly on the leaderboards. 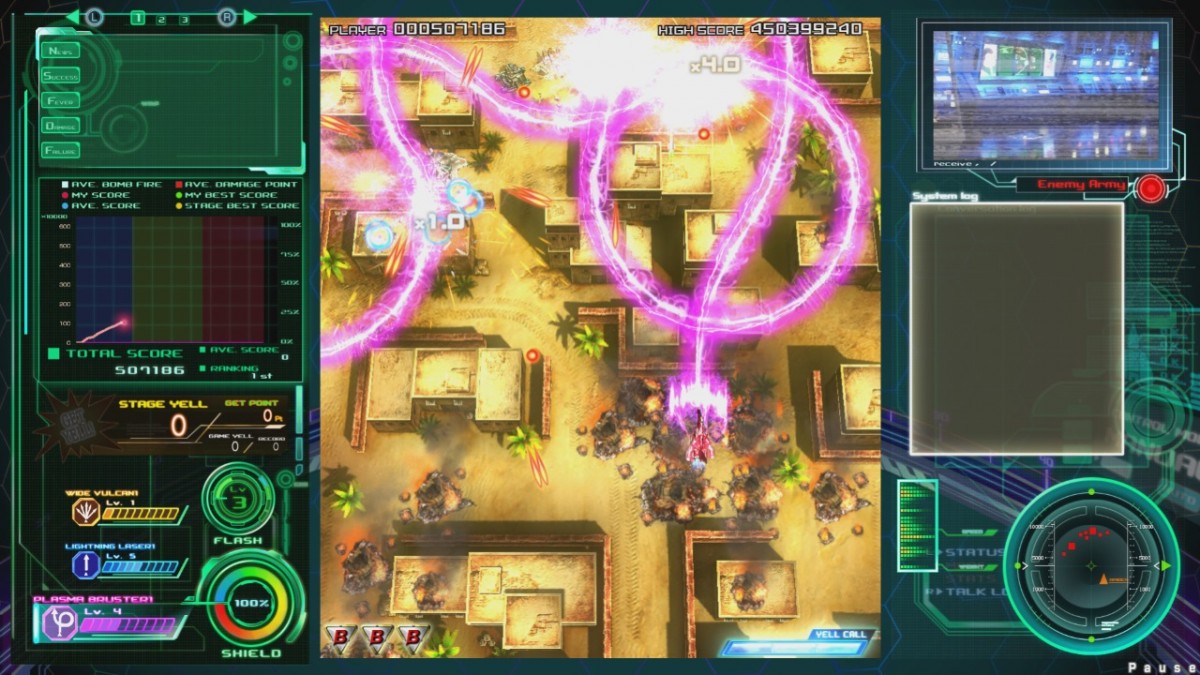 Strangely, whilst you select one of each weapon type at the outset, you can’t switch between them at will. Instead, you have to collect a gem-like pick-up that switches between three colours, signifying which weapon it will grant you when collected. Pick up the gem when it’s the same colour as your currently equipped weapon and hey presto! It’ll level up, boosting its attack power, range or rate of fire, which is very handy when you reach the more challenging stages later in the game. Each weapon can be increased to level 10, at which they all become quite ferocious, but those wanting to fight the game’s true end boss must raise all three weapons to level 10 and take the most advanced route through the game to do so. Trust me; it’s quite a challenging task that allows little room for error when it comes to collecting weapon pick-ups.

When you’ve had your fill of the story mode, or just fancy a quick burst of action, there’s also a boss mission mode to occupy your time. Challenging you to beat the game’s numerous bosses against a time limit whilst using only certain weapons, there are five ranks of bosses to work through in all, providing a nice diversion from the main action. Apart from the boss mission mode though, many players may be disappointed to hear that there’s nothing else to get stuck into to. There’s no stripped-down arcade mode so you can play without the sometimes intrusive story trappings or a score attack mode to add some variety to the gameplay, and there aren’t even any local or online co-op options. Raiden V’s true longevity then comes from its leaderboards, where true fans of the game will strive to hit the high scores.

Although Raiden V has no co-op gameplay options, it does have an online enabled function that gives players the chance to help each other. Called the Cheer system, completing tasks and hitting milestones such as destroying a set number of enemies or completing a level alerts other online players. If they just want to be helpful or are genuinely impressed by your actions they can cheer you, adding to your cheer meter. Gather enough cheer and you can unleash a devastating special attack that is useful for getting out of a tight spot when needed. Remember though that praise works both ways; you can cheer on other players too by pressing the appropriate button when an alert pops up on your screen, boosting your cheer meter by a lesser amount. 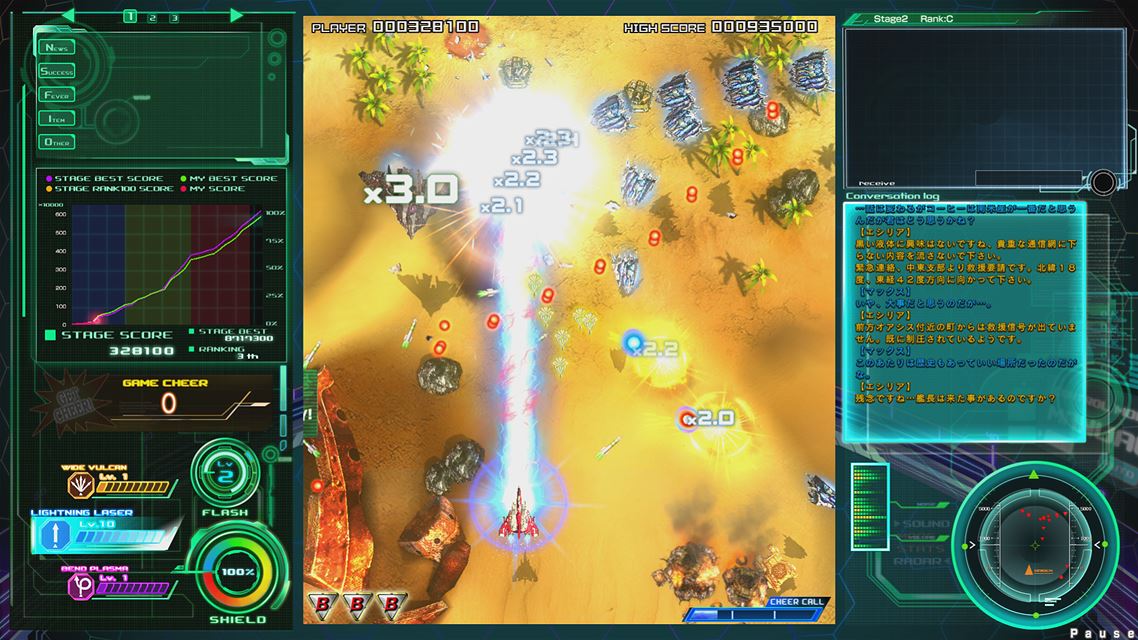 Perhaps Raiden V’s weakest aspect is its presentation. With the actual gameplay occupying just a small vertical section in the centre of the screen, the left hand side shows cheer, score and weapon information whilst the right is all about the story, both via a limited array of pictures and a text log. As if this cluttered display wasn’t already a little off-putting, the gameplay graphics themselves unfortunately aren’t that impressive due to rather generic design. On the flipside however, it does at least run extremely well with no noticeable bouts of slowdown, which is a must for this type of game. Audio wise, the solid soundtrack and sound effects are somewhat ruined by characters that talk pretty much constantly throughout the game, although the English dub is appreciated as it allows you to take in the story without taking your eyes off the action.  Not that there’s much reason to pay any attention to the story though; it’s largely just unnecessary twaddle.

Presentation issues and lack of gameplay modes aside, there’s no denying that Raiden V is another worthy entry in the series thanks to its challenging yet highly enjoyable gameplay. It’s wholly generic, and definitely doesn’t try to reinvent the wheel, but it’s the type of game that you’ll revisit again and again as you try to beat your high scores and explore routes that you’ve not yet visited, eyes glued to the screen throughout. There is a high price to pay to be able to engage in its pleasures though; £39.99 in fact, and unfortunately I’m not sure there’s enough here to warrant it. No doubt ardent vertical shooter fans will find enough value in Raiden V to make the cost negligible, but those who just like to dabble in the genre now and then are probably best waiting for it to go on sale.

Raiden V is available on Xbox One.