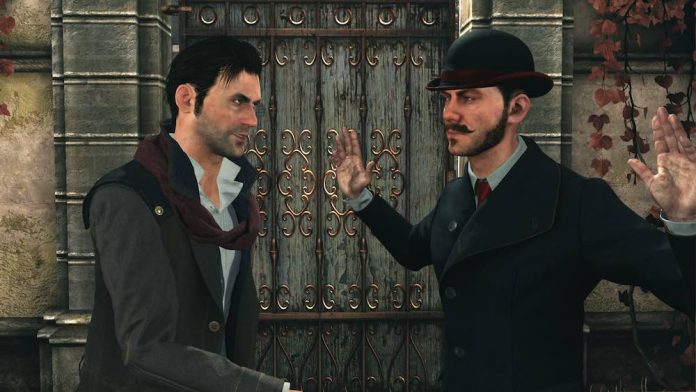 I loved Crimes and Punishments, Frogwares’ last crack at the Sherlock Holmes franchise.

There they took several big steps forward, offering the new deduction space where players could piece together all the clues they’d collected and come to multiple conclusions in each case, some correct and some not so much. They also enhanced the visuals a great deal, and for an early next-gen game it was comely enough to glide just over the ugly stick. My hope, at that time, was that Frogwares would take everything they’d put in place and all the critical and player feedback and return for their next chapter with something truly worthy of shelf space next to Telltale’s recent successes.

The Devil’s Daughter is, ostensibly, a re-imagining of sorts for Arthur Conan Doyle’s literary superhero. Still set in late Victorian London, The Devil’s Daughter features a younger Holmes and Watson than in previous iterations. Gone is the stoic, middle-aged English gentleman once voiced by Kenny Shale, replaced by a darker and hipper take on the character. I can understand the reasoning behind this and I was actually quite excited at the prospect of the Dr. Who-esque visage of Holmes in the promotional material, but in reality, the new character is little more than a skin swap. Certainly he appears younger and seems a bit more energetic than Kenny Shale’s take but unlike the modern BBC series, helmed by Benedict Cumberbach in the titular role, neither the writing, plot, nor characterisation is up to the task of differentiating this version of Holmes in any way. The character is still as plodding and methodical as ever and possesses none of the manic, borderline sociopathy that the modern interpretations are so fond of. Now, I’m not saying that’s the only direction that Frogwares could have run with it but it would have been something, whereas they’ve opted instead for a new overcoat and a younger voice actor then turned all the lights off and went straight home.

The game itself is structurally identical to Crimes & Punishments; a series of seemingly disjointed cases all connected by a central narrative thread that culminates in one grand revelation. Here we have four uninspired regular cases that lead up to a final conflict that defines anticlimax if you played the last few games. It feels like the writing team at Frogwares was simply going through the motions, hoping that the whole would end up being something more than the sum of its parts without taking any care to actually make each individual moment engaging. The final chapter is, without a doubt, the most interesting and complete, featuring some technical tricks and bits of dramatic flair that are entirely absent in the rest but you’ll only see it if you’re able to slog through the preceding six hours to get there.

At the beginning of each case, you will be presented with a brief cutscene setting up the crime under investigation and some of the suspects or victims involved. From there you will ping pong to and from 221b Baker Street using  a map of London and a horse-drawn carriage only barely masking the interminable load times considering the unspectacular size and detail of the environments on display. You will then interview suspects and collect evidence while slowly connecting observations in the deduction space. Everything is kept track of for you in the main menu using a series of yellow icons to let you know when a particular piece of evidence or dialogue option has been sufficiently investigated. Once you’ve collected all the evidence necessary you make one final trip to the deduction space where you will make your final connections, choose an outcome to the case, and make a moral choice over whether you will condemn or absolve the suspected perpetrator. 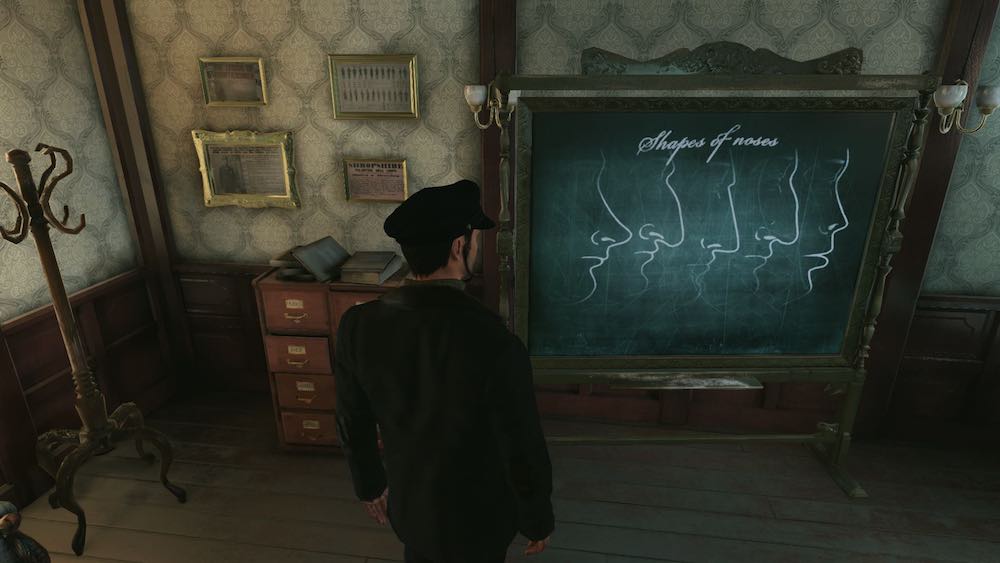 There is only one correct outcome to each case and revealing the true culprit is the bit that is supposed to make you feel like the legendary detective. Unfortunately, The Devil’s Daughter carries over Crimes and Punishments’ propensity for a preponderance of wildly circumstantial and poorly defined evidence that can often lead you to the wrong conclusion. I’m certain the developers would defend these choices as red herrings that should make you feel like a real detective but the problem with portraying a character like Holmes – a fictional giant written into a world in which he is incapable of being wrong – is that a way must be found to offer the player all the information that Holmes himself would have. Often times many of the incorrect conclusions you draw could be helped along by Holmes saying something more than, “no, I don’t think so, I should pay more attention to detail”. Holmes has all of the information at his fingertips because he is Sherlock Holmes whereas I, the player, do not, and it should be the developer’s job to bridge that gap. Frogwares, in keeping with its previous entries, has continued to fulfill that obligation poorly.

No need to truly worry about making a mistake, however, because your final conclusion can always be checked with a single button press before committing, followed by an immediate rewind to attempt your final deduction again. It makes it feel as if Frogwares knows just how little feedback they’re giving you and wants to make sure not to upset you further by allowing their mistakes to become yours. The result of this is that you feel less like the world’s greatest detective and more like its greatest practitioner of trial and error.

Now, I’ve been hard on the deductive reasoning section of the game so it might surprise you when I say that that is the prime reason to play The Devil’s Daughter if you’re still interested, but before you do allow me to give you a warning. Unless you have a strong constitution for terribly designed and implemented environmental puzzling then you should stay far, far away from this game. I mentioned trial and error earlier but one particular section of The Devil’s Daughter attempts to test the craftsmanship of that phrase’s stitching. This particular area is composed of a series of “puzzles” that require no observational or deductive reasoning beyond the understanding of what killed you last time. It is annoying, obfuscating, and seemingly placed there as a misguided attempt to make The Devil’s Daughter more of a “game”. Add to that numerous quick time events, balancing mini games, platforming puzzles, and a ridiculous eavesdropping mini game that sacrifices one button press at the altar of thirty seconds of pointlessness and unless you are all in on the idea of a Sherlock Holmes adventure you will be hard pressed to find any reason to spend your precious time on a game that simply doesn’t take the offer seriously. 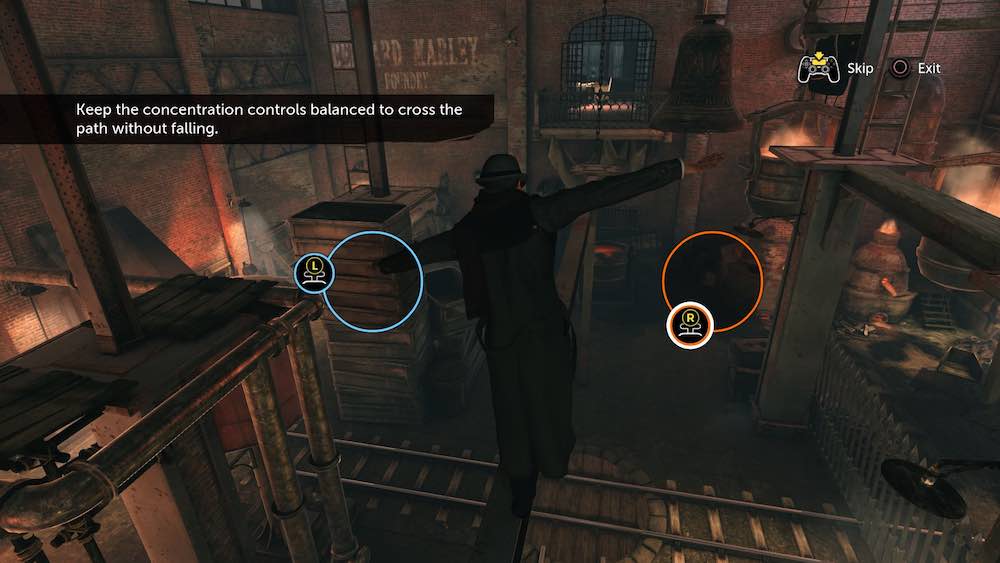 Because you certainly won’t come for the visuals. In the two years intervening between 2014’s Crime and Punishments and 2016’s The Devil’s Daughter, game development has taken some big steps forward graphically and what was once acceptable and almost charming from a b-list standpoint has become unbearably and inexcusably ugly. Character models look like half-melted wax dolls being awkwardly posed by freshman puppeteering students. Dialogue is almost universally out of sync and I’m not sure the awkward lip movements would lend any sense of realism even if it were. Many of the assets are recycled including Sherlock Holmes’ entire wardrobe from the last game save the overcoat that is supposed to lend him his “edgy hipness”. Load times are ridiculous, environments are small and restrictive, and Frogwares couldn’t even be bothered to sort out the vertical synchronisation to get rid of the constant screen tearing.

The voice cast, at least, ranges from excellent to passable which you’ll only realise if you close your eyes in order to dissociate the voices from the lifeless homunculi on your screen. Also, the writing doesn’t do them any favors as Frogwares has continued to churn out dime pulp dialogue that attempts some measure of interpersonal drama in its final moments but falls utterly flat without the pacing and development those connections require.

But if you’ve played any of Frogwares’ past Sherlock Holmes games none of this will surprise you. They have always been unexceptional interpretations of the world’s most exceptional detective, at times displaying some moments of brilliance, but mostly held back by their ineptitude and desire for safety. This entry, however, reported itself to be a bold new vision for the franchise and one that could have changed up all the rules. What was delivered is more of the same in a sharp new overcoat and handsome rugged face which serve to conceal nothing of the vapidness underneath.

Sherlock Holmes: The Devil’s Daughter is available on PC, Xbox One and PS4. We reviewed the PS4 version.

Here’s The Latest Trailer for Sherlock Holmes Chapter One