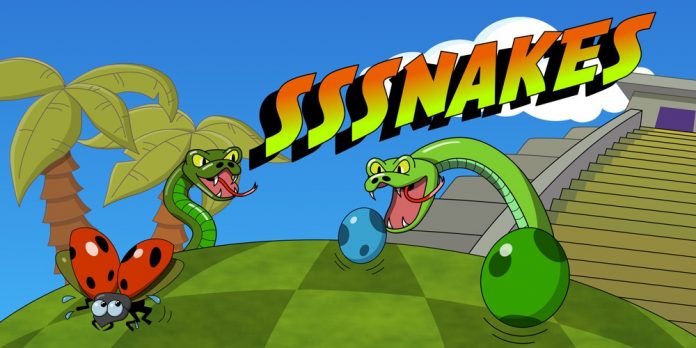 Anybody out there who ever owned an old Nokia phone will undoubtedly be very familiar with Snake, the simple but furiously addictive game that came included on the handset.

While it was not the first snake game (that honour goes to Snake Byte by Sirius Software for the Apple II and Atari 8-bit), it’s definitely the most famous one and a huge part of many people’s younger years. Well now developers EnjoyUp and Software Scribes have brought the game back and bang up to date with the release of Sssnakes for the Nintendo 3DS.

I am sure most people out there are pretty familiar with the concept of Snake, but for those that aren’t here’s the synopsis. You control a snake who slithers around the screen and must try to eat all the food as it appears. Every time you eat something you grow a bit longer, making it more difficult to move around as each section of your snake changes direction as you do in turn. If you crash into yourself or you touch the sides of the screen you lose a life and start again small. Once you eat all the food on the screen you move onto the next level and do it all again, but with more food to eat. Also, just to make it a bit more difficult, as the game progresses your snake moves faster and faster, making it more difficult to control and avoid collisions. The overall objective is to simply score as many points as possible; old school arcade game style.

Sssnakes takes everything from the original versions of Snake and ups the ante in every single area. Firstly the levels now scroll, giving you a much bigger area to cover. Secondly, different level designs have been added in to make things more interesting. There’s now obstacles that get in your way, and enemies that include other snakes trying to eat the food before you do. Levels designs also add other unique elements such as mazes, which you have to try and find your way out of, basic puzzle elements such as switches and one-way tunnels, and environmental conditions, including levels that take place in the dark. All this adds a lot more variation to the gameplay and makes Sssnakes much more than just a exercise in reflexes, as the Nokia game was.

The other big change with Sssnakes from its predecessors is the move into 3D, which works very well here and also comes with a unique twist. Whilst the top screen of the 3DS shows the tilted 3D view of the game, the bottom screen shows you what the game would look like if you were playing it on your old phone! If you really want the full nostalgic experience, just cover up the top screen and prepare for some monochrome memories. 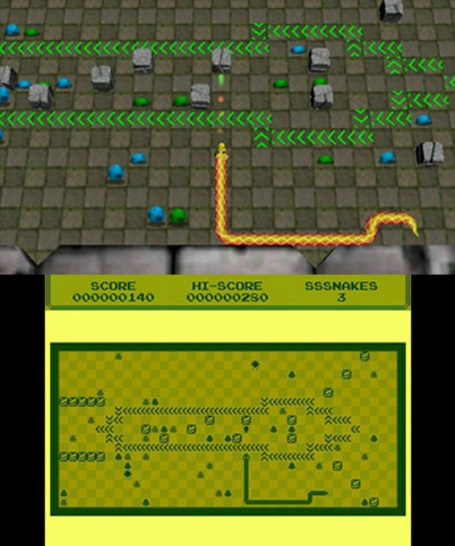 Other small features added into the game include different types of food and reactive icons that spawn lots of new food when you bump into them. There is also an old school score attack mode, which plays exactly like the original Nokia game, and online leaderboards so you can compete against your friends. The best feature of Sssnakes however is the price: this game can be purchased for just a penny short of two quid! Yes, that’s correct, in the often overpriced Nintendo e-Shop of all places this game can be had for just £1.99 (and only $1.99 in the US). You really can’t complain at that price, especially when Sssnakes is a really enjoyable game. Not to mention the nice visuals, tight gameplay and an especially excellent soundtrack; the latter of which is especially interesting to me as you don’t often find this kind of funky chiptune-inspired music in modern games anymore.

It seems to me that so much of the 3DS library these days is aimed at children so it’s really nice to see a new title aimed at the more “vintage” gamers out there, so a big well done to the developers for filling that gap in the market. All in all, I can’t help but recommend Sssnakes to all who own a 3DS; especially those wishing to relive their youth and play a bit of old-school inspired arcade action.

Sssnakes is available on Nintendo 3DS.