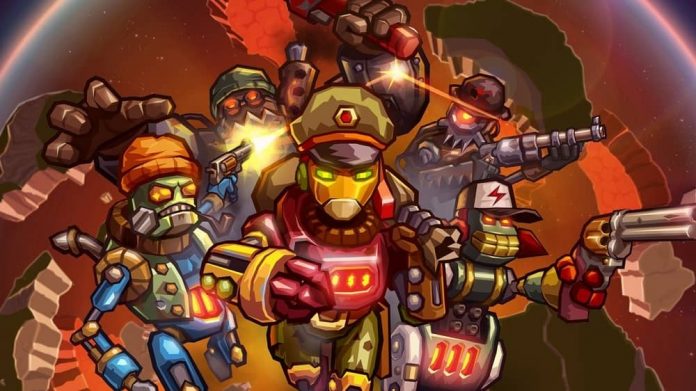 For fans of Fire Emblem, Final Fantasy Tactics, and other similar turn-based strategy games, relive this story. You near the end of a heated battle.

The opposing party has one enemy remaining. You issue the command for the finishing blow. The battle indicator said that you have a high probability of successfully hitting your opponent. You swing, and… *miss* appears on the screen. Teeth clenched, you chalk it up to being unlucky and reluctantly move on. Or you reset the game and start over. No judgement here. SteamWorld Heist, the distant sequel to Image & Form’s largely popular SteamWorld Dig, does away with all conventions of probability and chance that turn-based strategy games are known for. Developer Image & Form crafted an excellent turn-based strategy game that rewards players for their skill instead of relying on chance.

SteamWorld Heist originally released in late 2015 for the Nintendo 3DS (see our review here), with June 2016 seeing ports to PlayStation 4 and PlayStation Vita (cross-buy is available) alongside the first DLC pack, The Outsider. Ports to Xbox One, Wii U, and iOS are expected to release later in 2016. I have tested both the PS4 and Vita versions of this port and am happy to announce that I did not encounter any bugs or frame-rate dips in either version of the game. From my experience, they are both solid ports of an excellent game.

For those of you familiar with the game’s prequel, Steamworld Dig takes place on Earth. Now, Earth is destroyed and all of its steam robot inhabitants fled into space. The game follows Captain Piper Faraday and her crew as she transitions from the role of a smuggler and pirate to an adventurer. Piper is accompanied by her loyal pilot Wonky and swashbuckling gunman Seabrass, alongside plenty of other recruitable party members.

Witty writing and dialogue lends itself to create enjoyable and interesting characters. The writing also sets the tone for the setting, which is made up of elements of sci-fi, steampunk and western genres. These aspects mesh well, creating a world that feels both lively and vast. The world itself is beautiful; on numerous occasions I found myself ignoring a battle to appreciate the scenery. While the story itself is nothing we have not already seen before, it provides enough reasoning to justify what and why the characters do what they do. It may not be revolutionary, but it is certainly still fun. 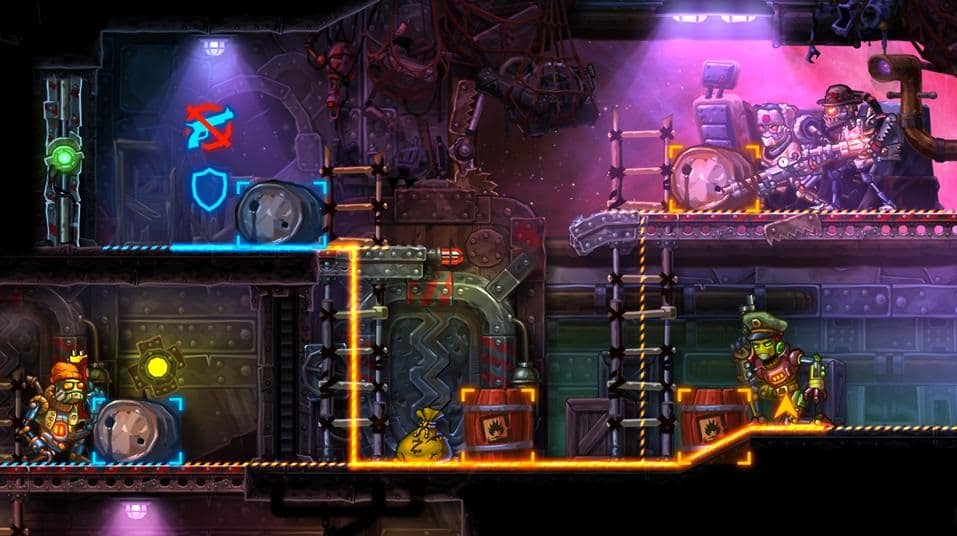 Most missions tend to follow a similar structure: enter the enemy ship, destroy all of the inhabitants or perform a specific function, and then escape in the ship’s escape pod. Turns in combat – either attacking, moving or sprinting – take place as whole teams, rather than as individual units. Attacking always ends your turn, but you can move and then attack. Sprinting, however, sacrifices attacking for moving further distances. You can also enable new actions based on abilities acquired through leveling up and equipping specific accessories before entering a mission. Each unit can equip a weapon, two pieces of accessory equipment, and a hat that is purely cosmetic.

Aiming and positioning are extremely important in SteamWorld Heist, as those two factors solely determine whether or not you hit the opponent, and whether or not they hit you back. After selecting an attack, you move your character’s arm to aim their gun and fire. Simply put, if you aim correctly, you hit the opponent and cause damage. If you miss, then no damage. There is no probability factor that plays into combat; rather, the player’s accuracy and positioning leads to success or failure. The ability to ricochet bullets off walls and other objects allows you to damage shielded opponents. The player protects their units by hiding behind walls and other surfaces throughout the enemy’s ship. Granted, enemies have the same strategic options, requiring you to be smarter and more efficient.

Five difficulty levels are all available from the start of the game and are switchable at any time. That being said, I found the punishments for different factors to be a bit heavy-handed. Excluding the Casual difficulty, failing a mission results in losing a minimum of 25% of your total water (your currency). If you saved up your water for any reason, this can set you back a fair bit of time. In addition, completing a mission with a defeated party member results in that member receiving no experience. You only gain experience at the end of missions, and I found that this resulted in characters falling behind quite quickly. 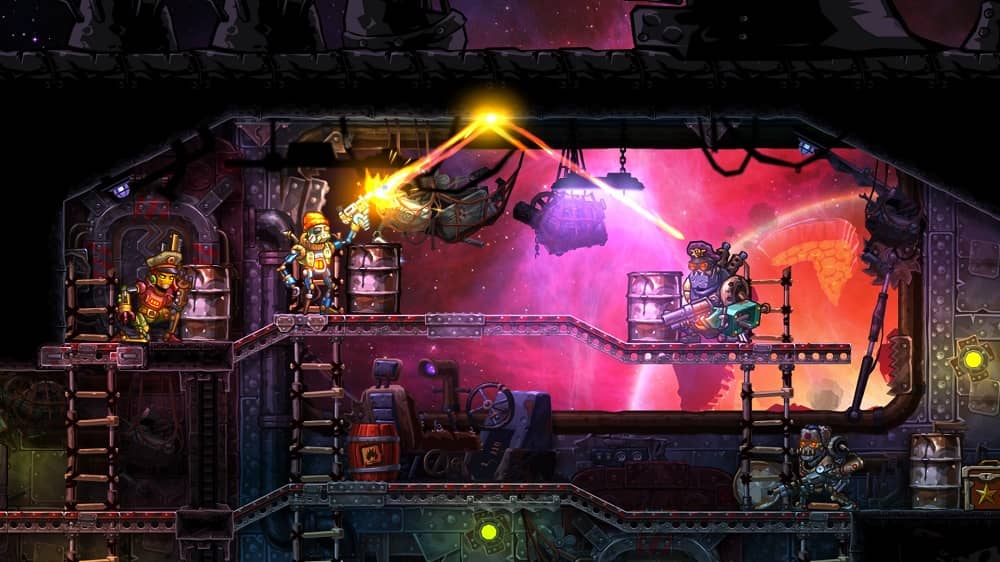 While fighting enemies, you will also spent your turns collecting loot (fittingly named “Swag”) throughout the level. Swag can include water, new weapons and gear, and items that can be sold for hefty sums of water. Each piece of weapon and gear fills one slot of your inventory, a clunky grid of squares that quickly fill up, requiring you to sell quickly what items you don’t need. Thumbnail images represent items in your possession and you must highlight the specific item to see its information. Since weapons and gear are in the same grid, you scroll through everything every time. Despite the ability to auto-sort items and acquire more inventory space, sifting through the inventory system remains a chore.

All in all, SteamWorld Heist is an excellent romp through outer space with a ragtag group of Cowbots. It took me around 13 hours to complete the main campaign and earn a 3-star rating on all missions. There is also a New Game+ option upon completing the game for those who want a repeat performance. The wonderful setting, the amusingly unique characters, and the excellent turn-based combat kept me hooked. Now, if you’ll excuse me, I have some spaceships to ransack.

SteamWorld Heist is available on PS4, PS Vita and 3DS. This review is based on the PS Vita version of the game.