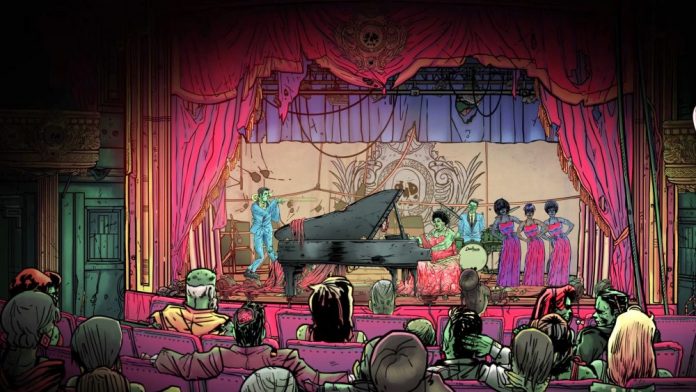 I’m sure that not many people would be able to guess what a “musical adventure” game might entail.

I didn’t have any idea either, but was pleasantly surprised when it involved a great soundtrack full of short songs about the game’s characters. I, for one, will probably have “We Are the Deadbeats”, the first song from the game that you hear, stuck in my head forever.

Wailing Heights is a quirky point-and-click musical adventure game developed by Outsider Games which tells the story of Frances Finklestein, the manager of the once great Deadbeats, a British rock band who has lost of all its members due to strange deaths. Now, in Wailing Heights, a town populated by monsters, Finklestein runs into The Deadbeats – some a little stranger, some a little deader, and since they’re all together anyway, people are expecting a reunion! Its up to you as Finklestein, alive and well in a place he doesn’t belong, to get The Deadbeats back together and get the heck out of Wailing Heights.

The gameplay of Wailing Heights is very creative and simple. You start out as Finklestein, who learns from a mysterious stranger how to “possess” people. You simply need the person’s name, something they hate, and something they love. Once Finklestein learns this, he can possess anyone he wants, as long as he has those three pieces of information. For the rest of the game you can hop between who you want to be, as long as you’re close to them. A ghost, a vampire, a werewolf, a zombie, whatever you want – dream it, be it! Throughout the game you have to switch between these different characters in order to solve simple puzzles. 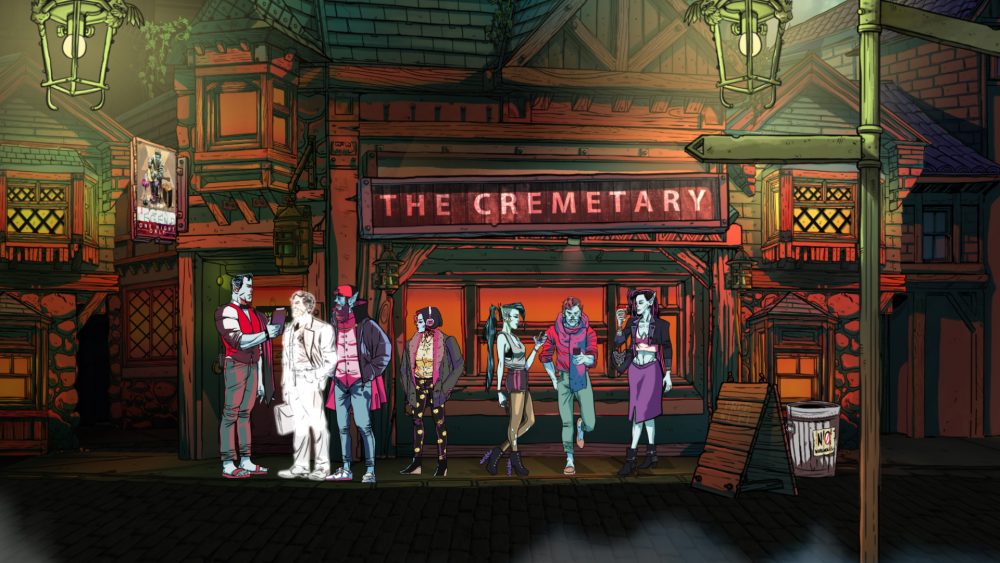 When I say simple, I really mean simple. There weren’t too many puzzles that had me digging around for a solution for more than a few minutes. Although to be fair, I cared much more about learning about the characters than I did about the puzzles – so I’m quite glad that they weren’t difficult. My favourite part about the game were the comic intros for many of the characters. When a new character was introduced there was a comic (narrated by Finklestein) for you to read to get a little backstory on a main character. All of the comic strips were nicely illustrated much like the rest of the game. The look of the game is by far one of the most impressive aspect it has to offer. It features very gothic-meets-90’s hipster-esque buildings, outfits, and even characters, all adding to the game’s lovely personality and atmosphere.

The soundtrack really is another place where Wailing Heights shines. The game features tons of little tunes, one for each character you can possess, as well as extras for you to enjoy. The soundtrack by itself is available for purchase and trust me, you’ll be interested after playing the game. The songs are clever, funny at times, and just great fun all around. The creators obviously spent a lot of time writing not only the awesome song lyrics but the witty dialogue as well.

The few problems that I found with Wailing Heights are quite minor and in almost no way affected my enjoyment of the game. Towards the beginning I noticed that it ran a little slow on my PC, so I went into the settings to turn my resolution down just a smidge and I was unable. The game still ran quite well though despite this problem. One other issue I had was that sometimes in order to speak with another character I had to get my character to stand in a very particular position. I found myself going left and right over and over to try and talk to people. A very minor problem indeed. Possibly the largest annoyance was the sound balance. The levels were very erratic, meaning some of the characters’ dialogue would be very quiet, and other’s would be very loud. I had to adjust my sound quite regularly because of this.

So, if you weren’t sure about the “musical adventure” genre, you should be now. There may not be too much competition, but Wailing Heights definitely belongs there as one of the genre’s greatest. It has tons of fun characters, an amazing soundtrack, and gorgeous graphics that all wrap up into a fantastic ghoulish package. With only a few minor problems it’s well worth your time if you’re a fan of puzzles, monsters and music, and Wailing Heights offers an abundance of all three.

Wailing Heights is available on PC.