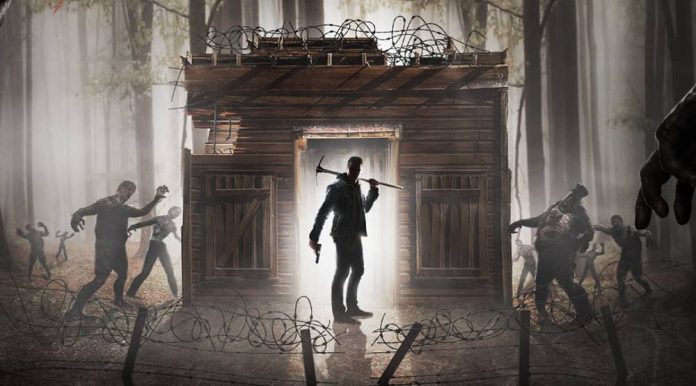 What do you get if you combine the crafting of Minecraft with the survival of Don’t Starve, throw in the zombie flavouring of The Walking Dead and add the first person action and exploration of the likes of Fallout? The answer? A bit of a mess.

7 Days to Die, developed by Fun Pimps and published by Telltale, combines elements of survival, FPS and crafting to bring what should be a unique and fulfilling experience. The game drops you in a world decimated by a zombie outbreak: it’s hostile, it’s harsh, it’s vast and sparse; and your only goal is to survive. The name’s a little misleading; “7 Days to Die” implies that you only have seven days, but in fact the game is endless – after every seven days, you’re met with a larger, more aggressive bunch of zombies. The idea is to spend each seven-day period improving your stronghold, increasing your defences and building up your own skillset in order to be able to face the growing threat.

In principle, it’s a great idea, and the core gameplay behind 7 Days to Die could be really fun – had it been executed well. Unfortunately, the first thing you’re met with when loading up the game is some really awful graphics. No need to readjust your TV set or check that you’ve not accidentally turned on that old PS2 that’s been sat gathering dust for 10 years; the game really does just look that bad, and even worse, the framerate struggles to remain consistent, with frequent stutters, freezes and bouts of slowdown making you wonder if the game was optimised for the hardware at all. Yes, you’re given a big world to explore, and sure, it’s not a big release with a triple-A budget, but its performance and looks are seriously off-putting at times. Textures randomly disappear as you play; you’ll fall through scenery more times than you’ll care to count; there’s so much popping it’s often disorienting; and enemy models are ugly and repetitive.

In fact, everything is pretty repetitive. For such a large, vast world to explore, most of it ends up looking the same. Every time you start a new game, the world is randomly generated. Everything is split into distinctive zones that you’ll see again and again: a ruined city business district, green fields, snowy landscape, a rural residential area. Walking around any of those areas often feels like your surroundings have just been potato printed around you. There’s nothing in the way of distinctive landmarks, and areas are often so sprawling and barren that they’re just not fun to explore. 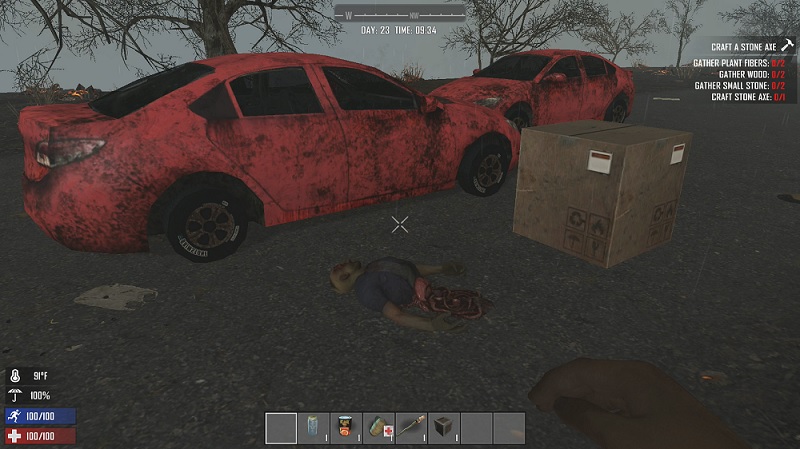 But explore is exactly what you have to do. With absolutely nothing in the way of a tutorial, it’s up to you to figure out everything, from what you need to find to survive to getting to grips with the convoluted and poorly optimised menus. Every time you start a new game you’re given an eight-step objective list to get you started with the basics – gather materials to craft an outfit; make a fire and start building a shelter complete with a simple bed. After that, you’re entirely on your own. Once you’ve got the hang of the clunky controls though, it’s actually quite rewarding to figure out your next step and slowly improve. Whilst an optional tutorial or extra objectives wouldn’t have gone amiss, it’s refreshing not to have your hand held throughout the game, leaving you free to experience and tackle it in any way you see fit.

The biggest problem with that though is that your success seems to depend heavily on luck. As the world is randomly generated, and so is your starting position, you could be lucky and be thrown in near a bunch of supplies, or you could be in the middle of nowhere, a good day’s walk from anything useful. Finding essential survival items is usually painstaking; whilst the world in abundance basic crafting items (wood and stone), food and water is another story. Food is never in a logical place – an abandoned supermarket gave me nothing but empty shelves and a few gold medallions, for instance – and instead you’re more likely to find something like a tin of chili down an old toilet, or on the corpse of a zombie whose head you’ve just bashed in. You have to look literally everywhere before you’ll get anything decent.

7 Days to Die features a day and night cycle, and whilst you can customise how many hours of daylight you experience every day, the night hours are often boring. Generally, I’ve locked myself in the safety of my base and ignored the game altogether for 20 minutes or so until the in-game clock ticks back round to morning. There’s not a whole lot you can do unless you have a torch – and the materials you require to craft a torch seem to be rather scarce (or at least they were in my game). Otherwise, the world is pitch black, and I don’t know about you, but wandering around in a zombie-infested wasteland when you can’t see a damn thing doesn’t seem like a great idea. Annoyingly, even though the game prompts you to lay down a bed (which acts as a respawn point when you die), you can’t actually go to sleep in it, so those boring night hours can’t be sped up in any way.

One positive point of the gameplay is that almost everything is customisable; you get a great deal of options when starting a new game, from refining your difficulty level to choosing how much of your inventory you’ll lose when you die. One thing to be careful of when tinkering with the settings though is that certain “easy” options seem to block out achievement progress, so if you’re a bit of a trophy hunter, I’d recommend sticking to the defaults. 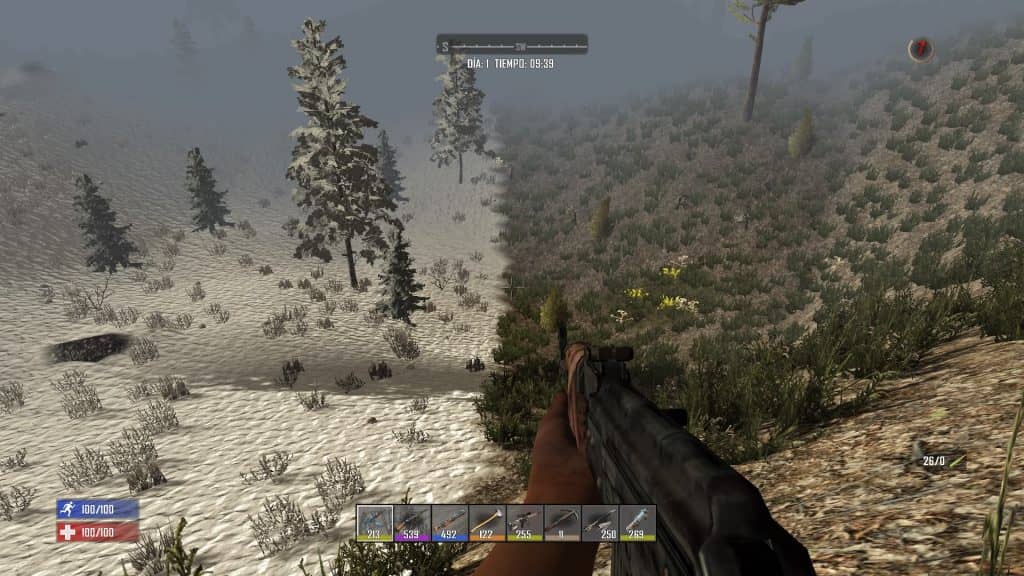 Even though it’s obviously been designed more with multiplayer in mind, 7 Days to Die is perfectly adequate as a single player experience – and actually, thanks to unreliable game servers and a seeming lack of multiplayer save options, you’re probably better off going solo. You can jump into a random public game fairly easily, and you can also create a private game to play with your friends. Be warned though – it only seems to save the progress of the person who’s hosting the game. Also, when trying to get another player to join my game, they were met with numerous server errors. We gave up in the end and played our own single player games.

However, playing in multiplayer either allows you to all work together – strength in numbers, as they say – or have your own separate rival camps. Friendly fire can be turned on or off, so what start out as a game of survival could become more like a traditional multiplayer shooter (or “bludgeoner”, as crafting any weapon other than a club takes a lot of looting). In my opinion though, the game is best when you’re concentrating on your own survival against the zombies. Building a stronghold and seeing it improve is actually quite rewarding, and providing you manage to find some decent areas amidst the massive map, looting and exploring can be quite good fun too. Enemies are pretty relentless, however. Alongside zombies of varying strengths, there are also rabid dogs and giant wasps to thwart your progress. In the early stages of the game you’re unlikely to have the best tools to engage in combat so running away is often your only option – but you’re forever being pursued, and even if you do kill them, more always find their way to the area. When scavenging inside enclosed buildings, I often had to resort to building walls behind me to block myself in, just so I could loot in peace!

Lastly, and perhaps most critically, 7 Days to Die has little in the way of a failstate, meaning that your one task to survive often feels a little redundant. If you do die – whether at the hands of a zombie or by some kind of illness – you’ll simply respawn by your bed. Depending on what options you have selected, you may have lost your items, but you can reclaim your inventory by going back to the spot where you died (which will be handily marked on your map). You’ll lose a bit of permanent health and stamina when you die, but these seemingly never drop below 70 which is an adequate amount. It’s very easy to die – especially in the beginning when you’re not quite sure what to do – so permadeath would be a little too harsh without some serious balancing, but with no other real end point besides either upgrading yourself and building the ultimate stronghold (or reaching a point where you literally cannot progress any further) it kind of makes the whole thing feel a bit… well, futile.

In the end then, 7 Days to Die is a promising idea that attempts to put a unique spin on a few overused genres, but ultimately it falls far short of what it intends to deliver. It’s hard to overlook the terribly outdated and buggy graphics, and the fact that the clunky presentation feels hardly optimised for consoles. Whilst gameplay can be enjoyable at times, it soon grows repetitive and tiresome, and the flawed day/night cycle means you’ll spend a great deal of time with nothing to do other than twiddle your thumbs. Ardent fans of survival and crafting may find something worth playing here, but unfortunately, I otherwise find it very difficult to recommend 7 Days to Die as a worthwhile experience.

7 Days to Die is available on PC, PS4 and Xbox One. We reviewed the Xbox One version.