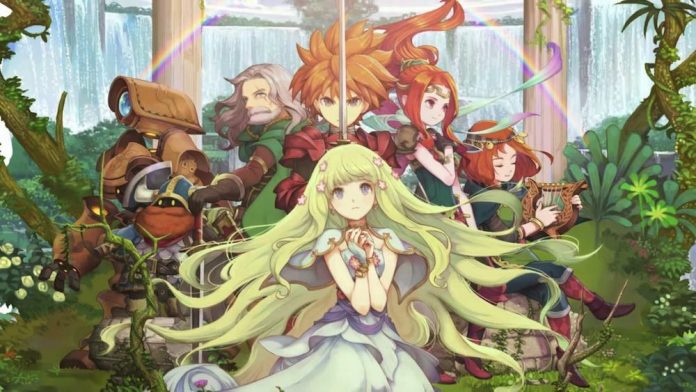 Originally released on Gameboy back in 1991, Final Fantasy Adventure was the first game carrying the Final Fantasy name that was made available in Europe. It’s crazy to think then, that some 25 years later, the game would be making a comeback on PS Vita and iOS – but having dropped its Final Fantasy branding.

Looking at Adventures of Mana, there aren’t many clues that this is a remake of a 25-year old game. The graphics have been completely reworked from those simplistic and blocky black and white Gameboy pixels to a gorgeously colourful visual feast, with character models and enemy designs having intricate detail. It’s only when you start playing that you realise how old school the gameplay is: a very simplistic control scheme gives way to a scrolling isometric adventure. Surprisingly though, 25 years might have passed, but this style of gameplay feels as relevant as ever; some classics never get old.

At its core, Adventures of Mana is a very basic RPG – in fact, it initially feels so basic that it feels a little like “My First RPG”. It’s not necessarily a bad thing; the simplicity of the controls, story and design means that its easily accessible for players of all skill level, but hardcore RPG fans may be a little put off by the lack of complexity. Remember though, this game started out life as a Gameboy title; besides a major facelift, the core gameplay remains largely unchanged. In that regard, what’s on offer here is actually rather impressive.

You play as young adventurer Sumo (or whatever you decide to call him – the character names can be edited before you start your quest) who suddenly finds himself embroiled in a clichéd plot that sees the world in danger at the hands of a supervillain. Naturally, the life of a princess is at stake, so Sumo must act to protect the beautiful Fuji in order to save the day. The narrative is rather generic, but it’s interesting and fleshed out just enough to propel your progress forward. During the first half the game, there’s a good pace as you constantly uncover areas of the map, visit new towns and explore new dungeons. Unfortunately, somewhere after the half way point, you’ll find yourself having to backtrack across the map several times to talk to the same people in order to be given a new objective. There’s no fast travel, but luckily you have a trusty chocobo steed to make your traversal a little speedier and more pleasant. Hurray for chocobos! 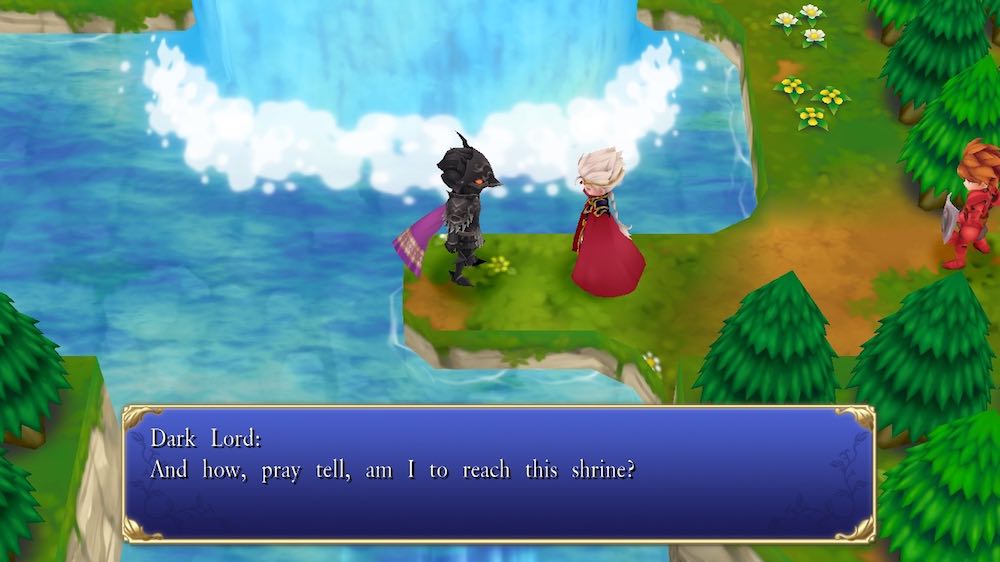 For the most part, the gameplay of Adventures of Mana is very enjoyable. With no difficult mechanics or anything more complicated than pressing two buttons to get your head around, it’s a laid-back romp that provides a pleasant means to pass the time. Its timeless style will instantly remind you of the Zelda classics such as Link’s Awakening or Link to the Past, which is never a bad thing. Combat is a simple matter of pressing X to swing your weapon of choice in the way of an enemy, and although no enemy is particularly hard to beat, there’s a large range of types on offer to keep the game feeling fresh. There is an impressive amount of boss battles too, although again, nothing is particularly challenging. The designs of each boss are varied and interesting, but whilst each has its own attack style and pattern, they all go down fairly easily after swinging your weapon a few times.

Along with combat and exploration, there are a smattering of environmental puzzles to keep you more engaged in the adventure as you go along, too. Most of the time, these puzzles provide no problem and are easy enough to figure out, although a couple of instances highlight serious design flaws in the game that, unless you’re really lucky in completing them first time around, will likely seriously degrade your enjoyment of the title.

Throughout the game, there’s an overuse of floor switch puzzles in order to reveal the way to the next area. To begin with these were fairly easy: stand on switch; door opens. As you progress, they get a little more difficult: push an object onto switch to activate, and eventually to the more obtuse use-magic-to-freeze-enemy-and-push-frozen-enemy-onto-switch. Once you realise what you have to do, it’s pretty easy – in theory. However, you can only turn certain enemies into ice statues, and what type of enemies (and the numbers) that will spawn in a room is random. There was one particular puzzle that required two enemies to be frozen and pushed onto switches. The trouble is, the room rarely spawned two of the correct type of enemy. I had to backtrack several rooms in order for the enemies to respawn, and it took at least eight attempts to get what I needed. Perhaps I was unlucky; many players may get the correct enemies spawn first time (and not mess it up by accidentally destroying the frozen enemies or having frozen them against a wall that meant you couldn’t push them in the direction you need to – both equally easy to do), but it was enough to sour my enjoyment of the game somewhat. It feels pretty cheap to leave a solution to a puzzle (that should be fairly straightforward) down to random chance.

Another instance of a similar puzzle always spawned the right kind of enemy, but this time accompanied by an NPC, he’d attack the enemies before I had chance to turn them into frozen statues, sometimes killing them, meaning I’d have to leave the area, wait for them to respawn, and try again. 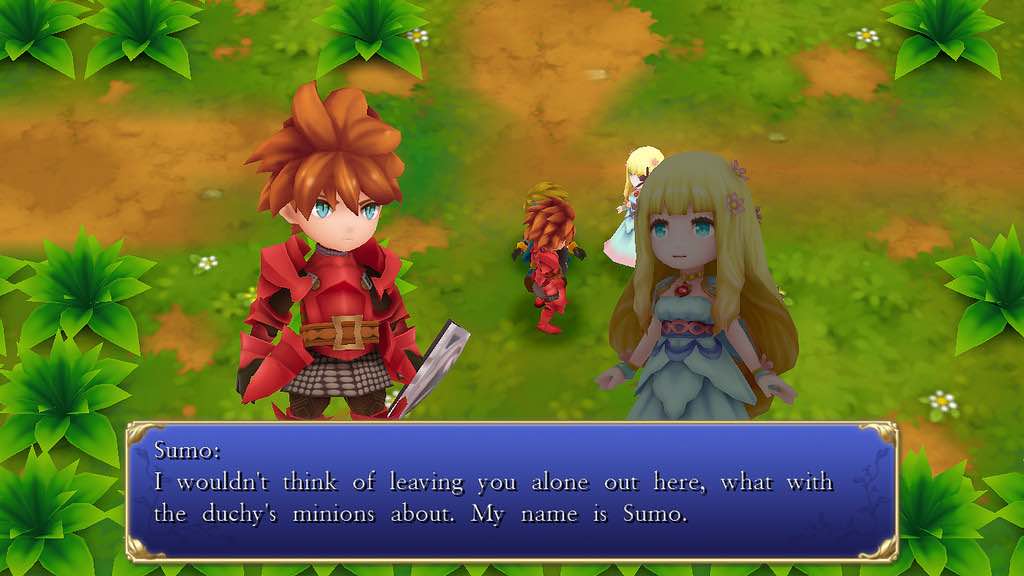 Now, when Adventures of Mana is progressing at the rate it should, there’s a lot to like. Dungeons are complex and labyrinthine, and there’s a lot of exploring to do. The world map is fairly sizeable for a game of its size too, with plenty of different regions each with their own unique flavour to explore. You level up at a steady rate, choosing which stat you’d like to put your point into, and gaining HP and MP every time. There’s a wealth of new weapons and armour to collect as you make your way through the game; some are earned after destroying bosses, others are random pick-ups and the rest can be purchased from one of the many weapon shops dotted around the map. You’ll frequently need to change weapons as you play, as certain weapons have certain abilities – i.e. the axe can chop down trees, sickles can slice through overgrown ferns and chain flails can be used to pull yourself across chasms. Certain weapons only damage certain enemies too; it’s a shame you can’t have more than one equipped at a time, as constantly entering the menu to switch can get a little irksome.

Along with your melee weapons, you have a wealth of magic skills that you’ll learn as you go along, too. The first – and likely the only skill you’ll repeatedly use – is cure, and this will be followed by the typical fire, ice and thunder spells, amongst others. I found that melee combat was much easier than using magic, so most of the spells were fairly redundant for me.

It’s far from perfect, but once you can overlook the few design flaws that Adventures of Mana exhibits, there’s an enjoyable classic adventure to be had. Some of its simplistic nuances, such as one-button attacks and lack of complexity in levelling up, may alienate  fans of more advanced RPGs, but it’s a great introduction to the genre for younger players or those not as accustomed to more technical systems. If you can forget about the annoying flaws in some of the puzzles and accept that you’re going to have to do a lot of backtracking, Adventures of Mana should certainly be a title every Vita owner considers adding to their library.

Adventures of Mana is available on PS Vita and iOS. We reviewed the PS Vita version. 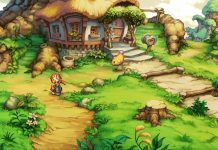