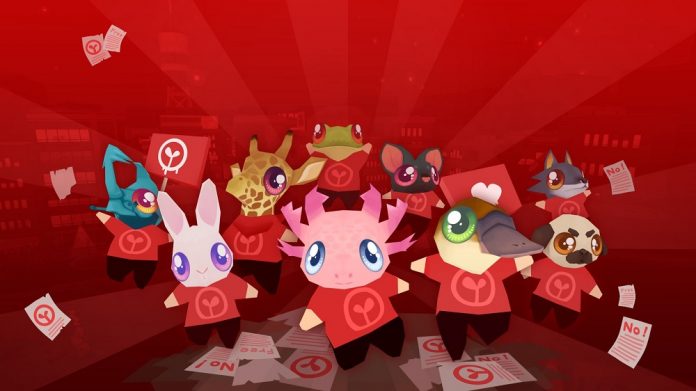 So when making a game that’s all about rioting to depose numerous nefarious companies that are taking over the world with their despotic practices, there’s only one thing to do to take the edge off, surely? That’s right; make all the rioters cute little animals! This is the devious idea behind Anarcute; a comical game by Anarteam that blends colourful cartoony graphics with the heinous act of using unruly force to cause mischief and mayhem.

It all starts out rather low key and simple; much like most real riots I suppose. Beginning with just a handful of anthropomorphic miscreants, your aim is to explore the small map each level presents you with in order to recruit more help for your cause, completing objectives along the way such as destroying brainwashing buildings or capturing a number of flags. Anarcute does often throw a curveball your way however, deviating from its standard mission design to face you with an assortment of escort, stealth and boss levels that offer a nice change of pace. Of course, no matter what your objective in each level is, the police won’t be too happy about your uncivilised actions and will stand in your path wherever possible to prevent any further wrongdoings.

With an ever increasing police presence as you progress, the key to success in Anarcute then is to recruit as many cute little rioters as you can. More rioters means more force, more arms to pick up objects from the environment to throw, and even more special abilities to use to your advantage. These special abilities are pretty vital to your success too, allowing you to form up in an invincible formation, do an area of effect stomp attack, and even topple buildings, for example.

What’s more, you can customise your ability loadout somewhat, spending coins earned by completing levels to purchase extra bonuses for you to equip. Whilst building up your group of rioters to enable the use of more advanced skills is highly beneficial though, maintaining it is a tricky task; not least because the bigger your group is the harder it is to navigate it through the myriad of traps and environmental hazards that are thrown your way, but also because the combat is just a bit messy. 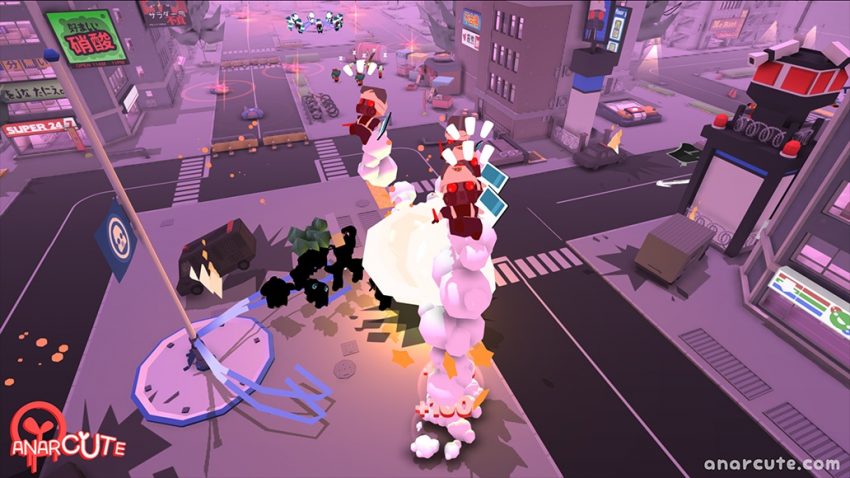 On a very basic level, combat in Anarcute is just a case of tapping the attack button to home in on your foes and engage them in a furious melee. Inevitably though, close combat leads to the loss of some of your rioters in most situations, and with you losing access to the abilities you’ve unlocked when the size of your group diminishes below certain levels, it’s not always the best option. Instead then, it’s beneficial to reduce the enemies’ numbers before each skirmish by throwing anything at hand at them, especially explosive objects such as cars. You can also obtain some particularly effective weapons from your fallen enemies and their constructs, including laser beams and guns.

All in all, there’s a decent variety of attack options on offer but it all ends up feeling just a bit too chaotic, especially when you’re being attacked from land and air whilst trying to avoid numerous mines and lasers littering the streets. Sometimes you’ll engage in battles that are so hectic that it’s hard to tell exactly what’s going on, and whilst there is a dash button to quickly get out of danger, using it is quite an imprecise affair.

It could be said that the audio and visuals of Anarcute are perhaps its biggest assets. On a technical level, the graphics aren’t particularly that impressive, being rather basic and exhibiting the occasional bout of slowdown and screen tearing. Anarcute gets away with its visual shortcomings though, because of its wonderfully cutesy art style that makes every second of it a pleasure to look at. The screen is constantly awash with colour, and the varied character models and environments are filled with little details that just make you smile. Even better, however, is the game’s soundtrack, which is sure to get your feet tapping due to its horribly catchy nature.

With more than 25 levels to complete spread over four locations, plus a nice surprise waiting in store for you when you’ve done so, Anarcute is a fairly sizable adventure for those looking for something different. Also, there’s a load of cute rioters waiting to be rescued and unlocked for further use as well as alternative clothing that’s awarded for obtaining S ranks within levels, adding some much needed longevity for those that must see and do everything. On the whole, those who manage to gel with Anarcute’s unique gameplay despite its haphazard combat and repetitive nature will find a reasonably enjoyable game to work through. For many though, I’d wager there’s a real risk that frustration and boredom may hamper the experience.

Anarcute is available on PC and Xbox One. We reviewed the Xbox One version.