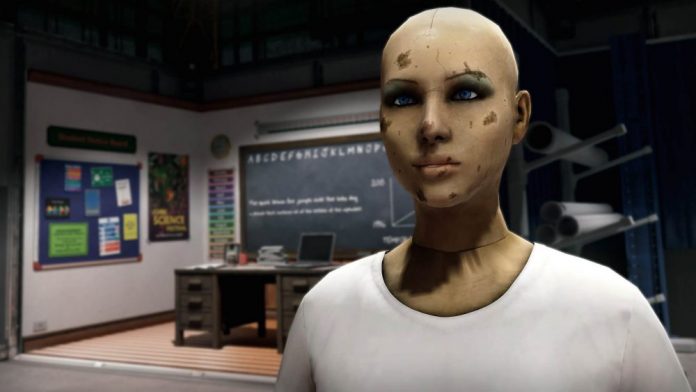 Like other enthusiast PC gamers, I made the decision recently to build a new PC and purchase a HTC Vive so I could jump into the virtual reality scene and see what all the fuss was about.

The problem I’ve found right now however, is the lack of quality titles for the new medium. Whilst there are plenty of experiences, experiments and prototypes to try out, there are few titles which are fleshed out or fully-designed yet. Most are just glorified demos, or small/brief pieces of software that remind me more of £1 apps on a smartphone than completed PC games. Thankfully, nDreams’ The Assembly reassured me that there are in fact some very high quality experiences to be had in VR.

Whilst The Assembly is retailing for £15 as a standard gaming experience (though it was developed with VR in mind), there is also a £5 upgrade to enable its VR features, which is what I took a look at, and experienced the entire game through. If you’re a fan of the kind of games that developers like Quantic Dream have made such as Farenheit or Heavy Rain, or even heavily narrative based games such as the ones from Telltale, then you’ll feel right at home here. Whilst there’s no heavy decision making to be had (apart from one major binary decision at the end), there are two major endings to unlock.

It’s unfortunate, but discussing the story beyond its immediate beginning would spoil the experience for anyone going in; the mystery/uncertainty of what is going on adds to the thrills and suspense of the narrative. All you need to know is that you play as two doctors: one working inside the secretive facility of The Assembly, built underground in the middle of nowhere, and the other as Dr. Stone, whose mother became terminally ill at the hands of a disease which she tries to cure, using her willing mother (also a doctor) as a test subject. An anonymous tip-off means that Dr. Stone’s controversial research is thrust into public view, and she’s left to face all kinds of allegations and repercussions from her choices. However, rather than having to deal with the fallout, she is instead kidnapped by “The Assembly” who hope to use her scientific skills and knowledge to help them further their cause.

From then on, you alternate at certain plot points to play between Dr. Stone and as a doctor currently working within The Assembly. This switching between roles keeps the story at a quick pace, and fits in with the mystery/conspiracy tones of the plot well. As answers begin to emerge in one narrative, we quickly switch back to the other, frequently ending things on a sort of cliffhanging note. You’ll constantly feel pressed to proceed quickly so you can get back to the other character to find out what’s going on. It’s also a nice change of scenery, as you move between investigation and puzzle solving. 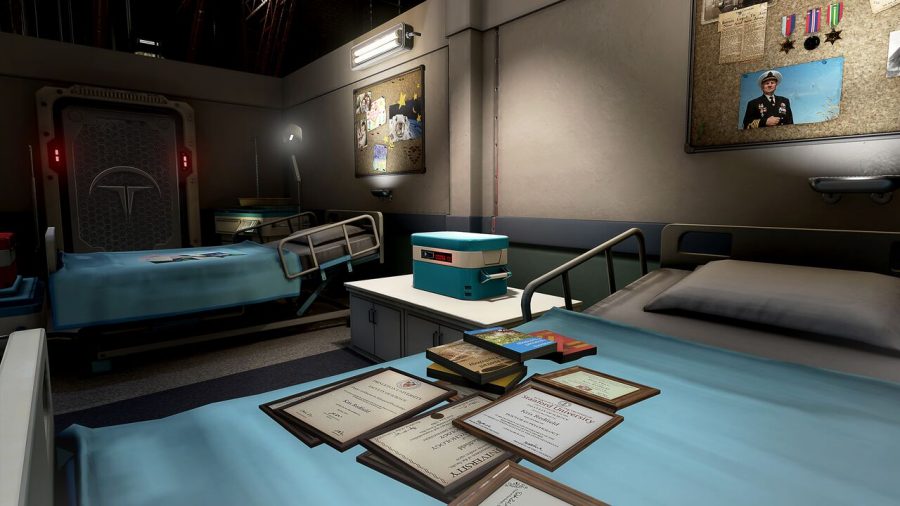 Those are the two main gameplay mechanics at large here. After a brief chapter of investigating The Assembly from the inside as an employee, you are given a brief moment to try some puzzle solving in order to keep things interesting and engaging. It’s a tactic we see employed in many narrative-heavy games; an example would be Catherine, in which the puzzle block sections would interweave themselves between the dialogue and emotional-centric moments. The puzzles aren’t too taxing; trial and error alone will get you through them eventually as there are a limited amount of options on hand. These puzzles do crop up in the second narrative as well, where things such as keycodes are only accessible by paying attention to the various emails and clues around you. I wouldn’t think of The Assembly as being primarily a puzzle game, but rather a narrative-based experience with light puzzles that can mostly be completed through brute force, if desperation takes over.

The VR control options show how much commitment nDreams have given to ensuring this becomes one of the more successful first attempts at a VR-centered experience in these early months of the medium. They understand that each individual will have various requirements for different setups, and will have different preferences depending on their needs and circumstances. Some may get thrown off their immersion by teleporting instantly and may want a different navigation system; others might feel motion sickness by turning around via snapping constantly and would rather smooth turning. All of these options in regards to movement and rotation can be changed in the options menu.

The game is mainly controlled via a controller/mouse and keyboard setup, and can be played sitting down or standing up, depending on your preferences. You can place a silhouetted avatar on the ground and press a button to teleport, or you can walk there yourself with traditional FPS controls. The speed of movement and turning can be adjusted too in the menu, and you can also choose different rotation modes between snapping at 90 degree angles, intervals, or smooth turning. Movement can be teleportation, interval steps, or smooth walking. Even if nothing else is achieved, these VR options are a success in themselves, and should be a good standard to follow in the future, at least for controller-based experiences.

Something else is achieved, however. With a combination of good storytelling, well-designed puzzles, and enough breadcrumbing in the environment through tidbits of information scattered via various resources, The Assembly remains interesting and engaging throughout. Interactive objects can be rotated and viewed which adds to their presence in-game, allowing you to pull yourself in and examine them in detail. The visual style and presentation is fantastic, and the power of the Unreal Engine’s lighting, coupled with a custom audio software solution for ambient audio, means that wearing a VR headset alongside a set of decent headphones makes it incredibly easy to become absorbed in the space The Assembly presents to you. 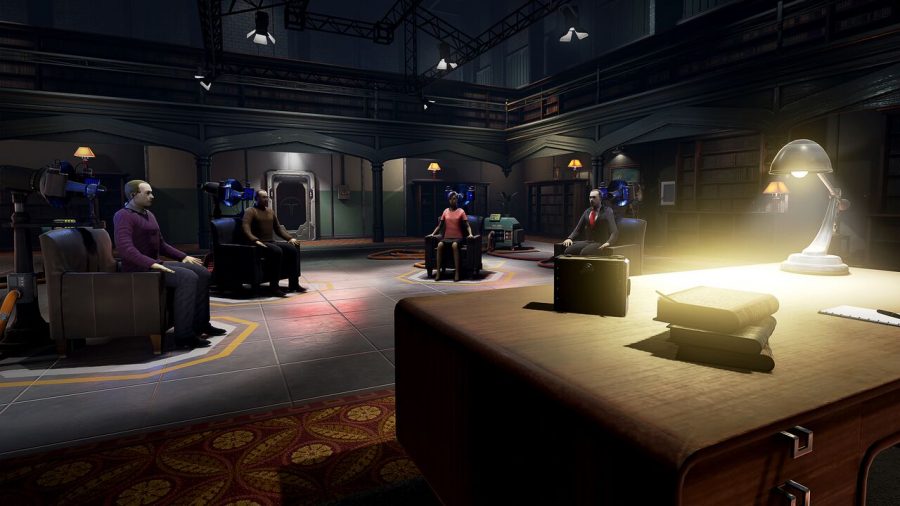 Voice acting is well done; writing is simple but serves its purpose. Less is more for this genre of mystery, and shorter writing absent of details keeps the player guessing and thinking a lot more. The music adds some light atmosphere to the environments, and drives emotion during specific set pieces, subtly adapting to changing conditions within the story or current moment of gameplay. Both playable characters are interesting to play as, with believable NPCs around them that all display familiar and relatable characteristics that I’m sure anyone within an office-style workplace can attest to.

I thoroughly enjoyed my time with The Assembly. It suffers from the usual cons of this genre of game, such as the multiple-choice ending basically being a two-choice switch at the very end (for the most part), and being relatively short. Considering the amount of detail it goes into however, and the quality of the game throughout, I can say quite happily that The Assembly succeeds in creating a high-quality VR narrative experience; it’s a pleasure to play from start to end. Whilst others have criticised its length, I look at the asking price of £20 and I think of the amount of detail present, and I believe its just about the right length vs price ratio. Considering the lack of great VR content around right now, the price really isn’t an issue.

The Assembly is the kind of story that will stick with you for a while after you’ve finished it, mulling things over in your head for the next few days. There are some moralistic and philosophical questions asked by the whole experience, and there are subtle nods in the design and writing of the game that show strong awareness of that fact, but it doesn’t require engagement on that higher-plane if you don’t wish to do so. Without a doubt, The Assembly is one of the first high-quality, content-rich VR games, and if this is any indication to go by, then VR narrative games are going to be a huge and exciting chunk in that VR pie.

The Assembly is available on PC and coming later in the year to PlayStation VR. We reviewed the VR experience on HTC Vive.