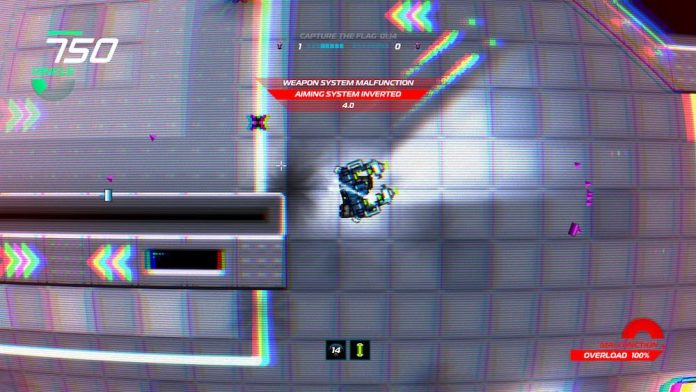 If you’re looking for a top-down, arcade-style arena shooter to kill some time, look no further. With solo, online, and cooperative gameplay, Broken Bots is a welcome addition to the PS4 library. Add a price tag in the single digits, and it’s hard to say no.

After a year on PC, developers BUNNYCOPTER have brought the twin-stick mayhem of Broken Bots to PS4. Revolving around either solo or team based game types, Broken Bots unleashes the player into an arena where chaotic battles between teams of machines take place in a handful of online and offline game modes. While there are some finer mechanics to master beneath the surface, what you get at face value is a classic, well organised top-down, twin-stick shooter. It is as aesthetically pleasing as it is smooth; the gameplay rarely, if it all, interrupted or slowed. Although not overflowing with customisation options, each player can craft their own respective play styles. And with an intuitive, easy-to-learn control scheme, it won’t take long for you to find yours.

At the menu you’re presented with two routes to go down, Quick Match or Custom Game. Quick Match will throw you into an online game in one of four game modes: Team Deathmatch, King of the Hill, Capture the Flag, or Crazy King (a King of the Hill variant with a moving hill). Custom Game allows you to pick from the same modes as well as select private and offline modes, including survival/private matches and Infiltration, respectively. Infiltration pits the player(s) against a mob of enemies defending a base, which you have to (spoiler alert!) infiltrate. For any of these modes you can add players locally for some couch co-op fun. The game modes offer little in the way of variety or complexity, but they are fast, frenetic, and engaging.

Finding your comfort zone in Broken Bots is a genuinely fun experiment. Six bots are available with different weapon sets, from plasma beams to flamethrowers, making for a good assortment of play-styles. Each bot comes with assorted stats related to such things as speed, fire rate, and damage. Before each match you select two skills and four passive abilities, each from a set of 10. The optimisation of these abilities is where the player the most freedom and opportunity, and it is glorious. The skills range from general healing and mines all the way to teleports and cloaking. The passive abilities, as expected, are a bit more timid and focus on stat building. Here, you’ll find the likes of fire rate increases, armor buffs, and cooldown reductions to name a few. A slew of combinations exist and finding the one that fits you makes the game that much better. 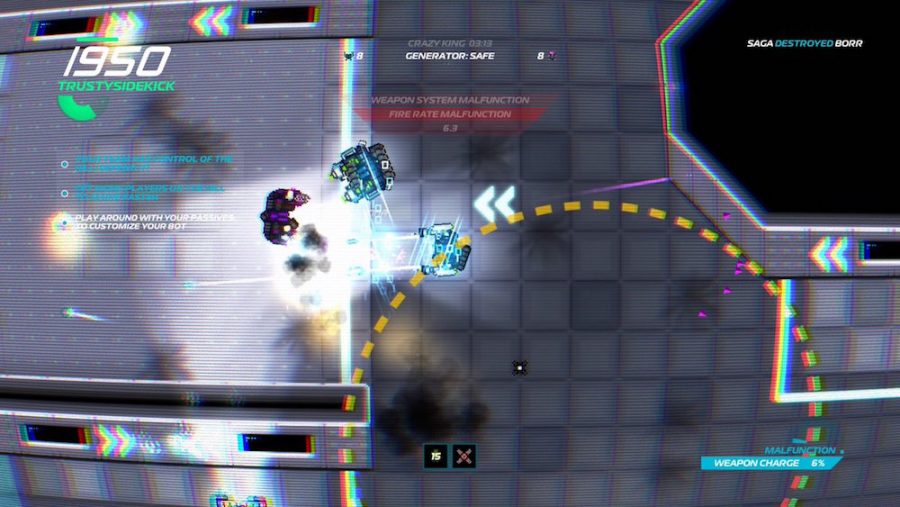 As battles rage on, two other hugely important aspects of the game come into play: Generators and Malfunctions. Located close to the spawns on each side are the generators, which hold a mighty resource. Successfully hacking the generator, by completing a small puzzle, gives your team a boost. As a result it can summon a horde of mini-bots, blast out an EMP, or give your team double damage. But the real fun lies in the malfunctions. Killing enemies and playing well will charge your malfunction bar up to 100%. At that point you can fire a single shot (L2) at an enemy or teammate. Teammates receive positive malfunctions like spread shots whereas enemies are punished with inverted controls or random fire rates. Helping your teammates is great and honourable, but watching enemies drive in circles due to inverted controls is pure gold. Malfunction animations look beautiful as well.

Online or offline, solo or cooperatively, its hard to not keep playing. Cross-play between PC and PS4 does exist, but the online matches are rarely ever filled with all human players. Even so, the AI bots make great competitors and fight intelligently. One of the biggest issues present is that local co-op requires Playstation Network accounts. When you sit down with a friend and want to play something together, making what is essentially an empty account shouldn’t get in the way. Many of the gamers today started playing in the golden era of couch co-op, and it is hard to see that going by the wayside. Nonetheless, there is plenty to enjoy here and more than enough replay value. Also not too bad for trophy hunters; though there is no platinum on PS4, the trophies that are there for the taking don’t require much time commitment.

What Broken Bots does right it does very right. From exceptionally smooth gameplay to the unqiue, endlessly fun malfunction system, the game emits joy. Sure, there’s a shortage of game modes and bot types. But you won’t worry about that when you’re blasting enemies away and grinning. Some games are playable because the level of fun overrides the flaws. Broken Bots is not one of those games. It’s fun because it is good. It’s fast, sharp, intuitive, and an absolute blast. For the price and the replay value, it’s a steal.

Broken Bots is available on PS4 and PC. We reviewed the PS4 version.