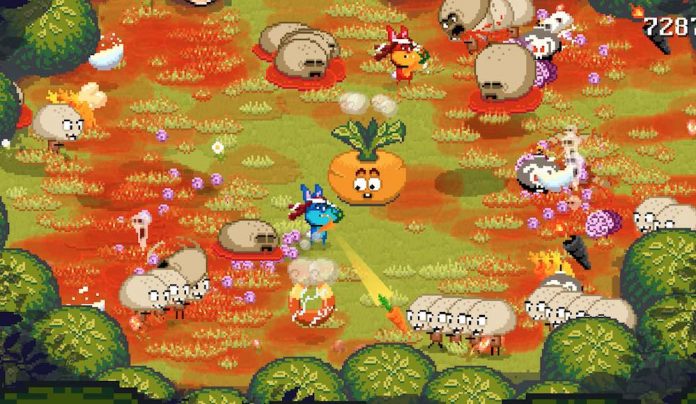 You would be forgiven for not knowing a lot about Of Carrots and Blood; a top-down, twin stick shooter from developer Trite Games, as the game is neither a triple-A title nor is it an innovative indie experience.

However, what Of Carrots and Blood lacks in terms of high-budget production values or fresh ideas, is somewhat made up for by its tight gameplay and colourful personality.

Of Carrots and Blood emulates the core principle that gameplay is king and consequently delivers satisfying, albeit repetitive, two-dimensional action and an animated artistic design that complements the frenetic fun on screen. While the overall package does suffer from a lack of content and a distinct shortage of variety in terms of gameplay, what is available is a short yet mildly entertaining romp through some violent, arcade action.

Of Carrots and Blood begins on a small island, where your character – a rabbit with the humorous name of your choice – meets the island’s doctor, Dr Leo McGriffin. Dr McGriffin informs you that these are dark times and that the island has recently suffered a volcanic eruption, which in turn has destroyed his mutation device. Furthermore, the villagers who live on the island have been turned into mutants and have since invaded the island’s forests. Dr McGriffin then tasks you in retrieving the DNA samples which have been scattered around the island. In terms of story, this is as much as the game provides and what little exposition is given, merely serves as a conduit through which the enjoyable gameplay can take place.

In order to collect the DNA samples that Dr McGriffin requires, the game places you within an arena which rapidly fills with the aforementioned mutants. In the centre of your screen lies a colossal carrot which you must defend from the oncoming mutant hoards by throwing razor-sharp carrots at your foes. Simultaneously, you must also keep an alert eye out for items that the swarms of enemies can drop. These items consist of cosmetic accessories for your character, vinyl records which enable you to play the game’s music, in addition to an impressive array of power-ups which cause diverse effects to your character’s attacks, creating an empowering sense of destruction. My personal favourite of these upgrades is the magnet ability which propels your attacks in a boomerang fashion, often occupying a majority of the screen when in full-flow.

Additionally, your foes can also drop the desired DNA samples which can be traded with Dr McGriffin in order to unlock additional skins and characters to play as. Furthermore, each mutant killed grants the player additional in-game currency which can be used in the island shop in order to buy further equipment and items.

Gameplay is satisfying, accessible and brilliantly violent, with the game’s retro artistic style harkening back to classic titles from the NES and SNES generations. However, despite combat being competent and at times empowering, the game suffers severely from a sense of repetition. Your task is continuously the same – survive for as long as you can against the oncoming attackers. There is very little variety in the gameplay aside from the aforementioned upgrades to your character’s attacks. This results in the game often feeling stagnant, providing little motivation to continue playing. A more robust variety of items to buy, or perhaps boss encounters or platforming sections interspersed between the frenetic gameplay, may have been the injection of variety that the game desperately needed. Unfortunately, the repetitive nature of the game is compounded by the fact that there is but one stage in which to defend your carrot from the encroaching enemies. The result is an almost hollow experience which demands more content in order to keep the gameplay feeling fresh.

Where the game shines however, is in its style and personality. Each time you continue your game from the main menu screen, a Rambo-like grunt of the game’s title is roared and adds to the tentative sense that you are fighting a war against the mutants. Moreover, the game’s personality also translates well into the actual gameplay. The titular carrot’s eyes will follow you around the arena as you attempt to defend it from harm, and the green grass of the forest you are protecting grows an increasingly bloodied-red colour with every mutant slain. Furthermore, I also appreciated that each new character unlocked features a unique attack that sets them apart from the rest of the cast. YouTube star PewDiePie for example, is playable within the game and attacks foes with his signature ‘BroFist’. It’s little details such as these that really adds a sense of personality and character to the game’s overall style, something which is already accentuated by its distinct and vibrant artistic style and retro soundtrack.

Additionally, the game also features cooperative play for up to four players which is available either locally or online. Multiplayer also allows for some much-needed variety and adds a great deal of fun to the overall package. Whereas the tower-defence mode found within the single player campaign is only available to play with up to two players, other modes such as Deathmatch can be played with up to four people and are pleasantly enjoyable in short bursts. However, taking the game online to play with friends can at times be difficult and needlessly convoluted. Multiplayer relies heavily on knowing an individual’s IP address in order to connect with them, and consequently contradicts the accessible nature of its gameplay by making it unwantedly complicated to play with friends.

Despite the game’s shortcomings, I found myself having an enjoyable time with Of Carrots and Blood. Granted, the gameplay may be tiresome and the package as a whole may be slightly lacking in content, however, for the reasonable price of £3.99 ($4.99), you can hardly ask for anything more. The game’s personality and artistic style shines throughout and while there is little narrative or impetus to really keep you playing after the second hour or so, I found myself wanting to attempt an additional run at defending my carrot from the evil mutant attackers. As it is, Of Carrots and Blood is an entertaining and energetic, if not short-lived, twin-stick shooter that is enjoyable in short bursts or with friends. However, the repetitive nature of its gameplay and the lack of diversity or variety really hinders the overall experience, and results in a title that is ultimately underwhelming and one that fails to distinguish itself as anything but mindless arcade action.

Of Carrots and Blood is available on PC.