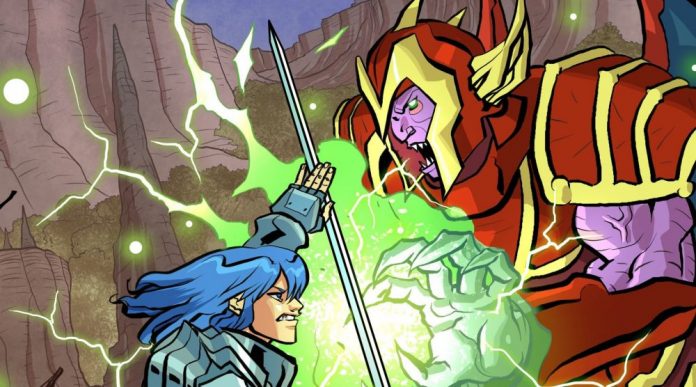 Remaking classic retro games certainly seems to be one of the biggest crazes among game publishers right now and Cast of the Seven Godsends is one of two such games that are both updates of the hugely popular Capcom coin-op Ghosts ‘n Goblins (the other being Maldito Castilla EX).

This arcade classic – and for that matter its sequel Ghouls ‘n Ghosts – are mostly renowned for one big thing: their extreme difficulty. This was fine in the arcades as it encouraged you to put in more money, but when translated to a home console, an extreme difficulty curve is not usually so welcome. Does this Xbox One update of Raven Travel Studios’ 2015 PC game follow the same path?

Well, let’s get straight to the point: yes it does – and unfortunately even on its easiest difficulty setting (there are four), Cast of the Seven Godsends is going largely impossible for the majority of more casual gamers. If you grew up in the arcades and are used to the extreme difficulty of mid to late eighties 8-bit games, then you might just stand a chance. Having said that I am one such person who grew up on rock hard ZX Spectrum games and has been gaming over 30 years, and even I found Cast of the Seven Godsends to be cruelly hard and unfair at times.

The publisher Merge Games describes this title as a run ‘n gun, but I think that’s perhaps a little misleading as the platform game elements take just as big a role in the proceedings. Just like the Capcom game that inspired it, Cast of the Seven Godsends bombards you with constantly re-spawning enemies, rock hard bosses (and even mid-level bosses!), pixel perfect jumps and even a time limit to complete each level in.

Where Cast of the Seven Godsends does even up the odds a bit and give you some respite is in the magical abilities and power-ups. Like Ghosts ‘n Goblins, your character starts with a suit of armour that can be knocked off if you get hit, which also decreases your powers and almost acts like an extra life. This armour can be upgraded though by picking up one of several different power-ups. The other, much more useful, collectable gives you special powers and is where the title of the game comes from. There are seven different magic spells that can be utilised to transform your player not only in appearance but also in ability. You will to learn each of these so you know which one to activate in the right situation. They are also single use so you have to be sure that you really need to use it! These are really cool and actually seem to be homages to other Capcom games such as Mega Man and Bionic Commando. Lastly, you can also upgrade your weapon from the standard knife to axes, swords and much more. 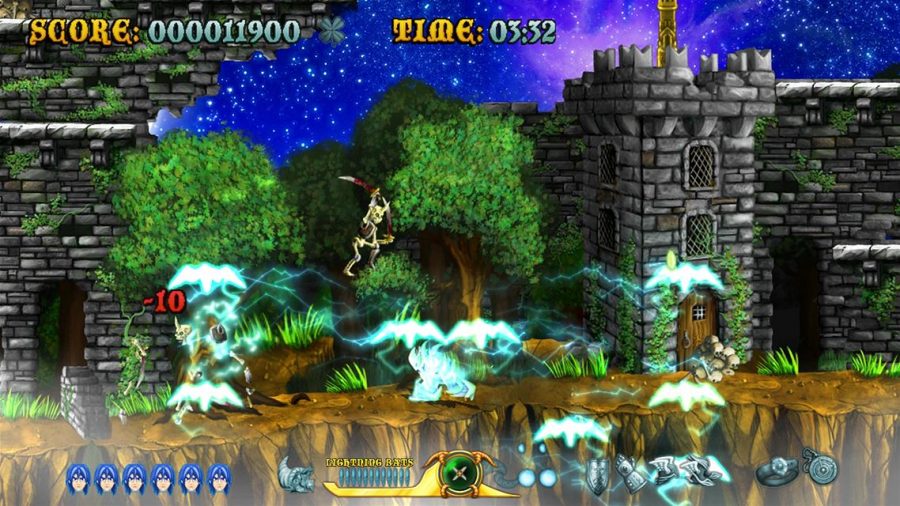 There are six levels in total, which might not sound a lot, but when many players will struggle to make it past the first one, this is more than enough! Thankfully the programmers did choose to include restart points throughout each level and give you a smattering of continues. There is also the ability to continue where you left off if you are coming back to it. So it’s definitely possible to progress in this game, it just might be very slow going! One nice addition, especially for us old school gamers, is the addition of “Easter eggs” (unlockable cheats and features for those that don’t know), giving you something else to aim for even if you do finish the game.

Graphically Cast of the Seven Godsends unsurprisingly goes for a very heavy 16-bit styled look but goes for more modern themes in the sound department instead of some cool chiptunes, which would have far better suited the game in my opinion. You are also introduced to the story via intro videos and pop-up dialogue boxes that become somewhat tiresome after a while as you can’t skip them particularly quickly. Control wise you just have two buttons – jump and shoot. Although this is good in theory and, of course, much closer to its old school roots, it would have benefitted from more buttons being used. This is because your fire button must also be used to select and activate your power-ups, which not only wastes valuable time but also leads to cheap hits while you mess around and makes it far too easy to get wrong. Why they couldn’t have given us the option of the shoulder buttons to select these is anyone’s guess. I also didn’t find the game to be as smooth as it should have been with some minor frame rate issues and occasional control lag, again no excuse for something like this really given the hardware in question.

Overall Cast of the Seven Godsends isn’t a bad game; it’s just an unreasonably challenging one. The difficulty alone is enough to turn away most casual gamers, and when you take into consideration the smattering of framerate issues and over-simplistic controls, it’s a title that should only be considered by the hardest of hardcore Ghouls ‘n Ghosts fans out there.

Cast of the Seven Godsends Redux is available on PC, PS4 and Xbox One. This review is based on the Xbox One version of the game.