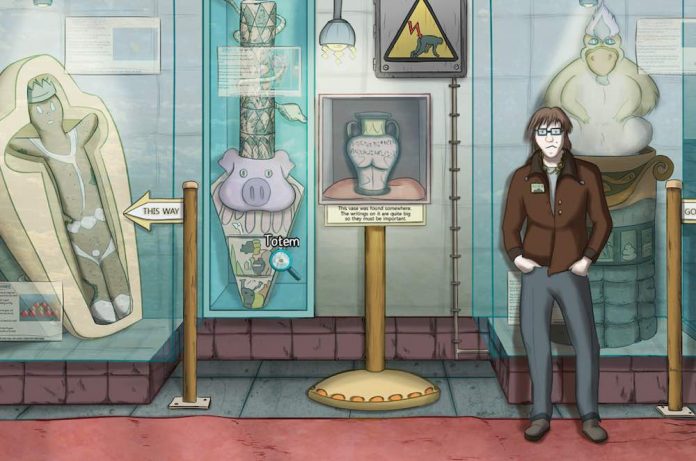 The point-and-click genre has witnessed somewhat of a revival in popularity over the past few years.

Central to this newfound surge of popularity has arguably been developer Telltale Games and their numerous episodic adventure titles such as The Walking Dead and The Wolf Among Us. Moreover, Demetrios – The BIG Cynical Adventure can be viewed as the physical manifestation of this recent increase in popularity, having been successfully crowdfunded on Kickstarter in November 2015. However, whereas Telltale Games’ point-and-click adventures weave intriguing stories featuring complex and developed casts, Demetrios – The BIG Cynical Adventure spins a nonsensical plot with an irritating band of characters, in addition to a tiresome gameplay loop that yields little enjoyment or satisfaction. The end result is an underwhelming point-and-click title that despite its interesting artistic direction, fails to captivate the player.

The game’s story opens with a simple yet enticing premise. The main protagonist, antique seller Bjorn Thonen, returns home late one evening to his Parisian flat, drunk. Moments into his slumber he is awoken by an anonymous phone call warning him that he is in immediate danger. However, ignoring the cautionary advice, Bjorn returns to his stupor only to be woken again by sounds of footsteps within his apartment. Bjorn, sensing the danger, seeks to find the source of the noise. Unfortunately for Bjorn however, he is knocked unconscious by the intruder and awakes several hours later to discover that he has been robbed. After reporting the robbery to the police, Bjorn is forced to conduct his own investigation in order to discover the true nature of why he was robbed and why he was specifically targeted.

Although the narrative’s introduction initially appears to offer a solid framework for what would be an intriguing adventure, what follows next is a nonsensical and incoherent plot which falls well short of delivering an interesting tale. Demetrios’ story spans six chapters in which the player must follow clues in order to uncover the mystery behind the robbery of Bjorn’s apartment. However, as Demetrios’ plot unfolded I felt increasingly as though the game’s narrative was inventing ways of making the story make sense. Bizarre plot twists, especially towards the end of the eight-hour adventure, appear to have been manufactured in order to try and hopelessly tie the loose plot threads together. Unfortunately, this only adds to the incoherent nature of Demetrios’ narrative and results in a story that is not worth the effort to see it through to its conclusion.

Gameplay on the other hand is a fairly traditional point-and-click affair. Each location has a number of hand-drawn screens which the player can explore to search for clues or items that may help solve puzzles later in the story. However, although there are a great number of items to find and collect, I often found that too many of them had no logical use or purpose. Similarly, the puzzles that the game tasks the player in solving frequently lack any real challenge and only begin to become cleverly designed towards the home-stretch of the campaign. 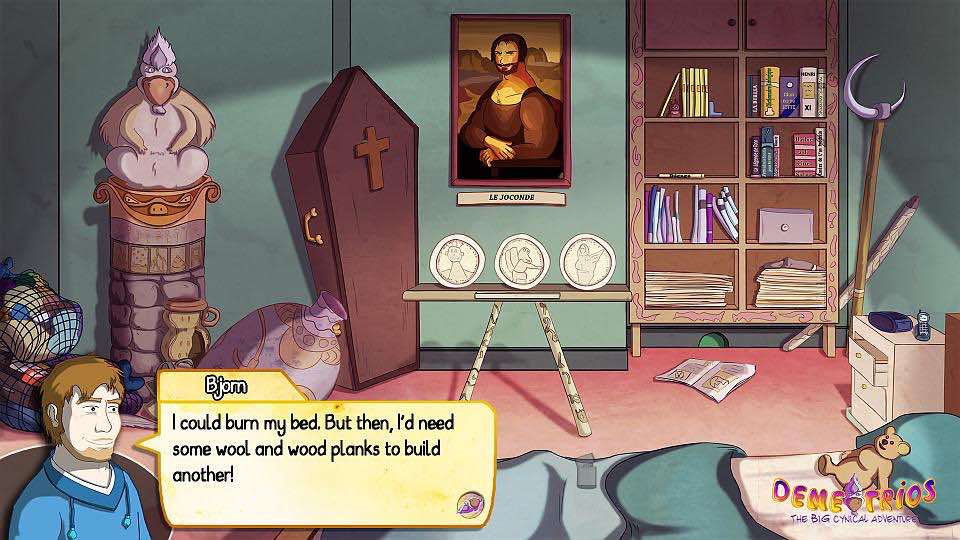 Furthermore, not only are a majority of the puzzles fairly simple to solve, but Demetrios also feels afraid to offer the player any real challenge. On each of the screens within the numerous locations, three cookies are hidden which act as hint providers when the player becomes stuck on a particular challenge or puzzle. Simply collect and eat one of the many cookies that you can find and the game provides the player with advice on how to solve the current objective. Whilst this feature can be a clever method of avoiding tedium within gameplay, Demetrios’ combination of a lack of difficultly in addition to an over-abundance of cookies results in a detraction from the enjoyment of the game. I often found myself relying too heavily on the use of these hints as it was far easier than trying to make my way through the sometimes obtuse riddles and puzzles. Whilst there is certainly some enjoyment to be had in solving these challenges, more often than not, the game devolves into a monotony of trial and error as you repeatedly search the environments for the items that the puzzles require.

Where Demetrios somewhat redeems itself however is in its overall presentation. For example, humorous comic-book panels are used at pivotal moments within the story in order to progress events along. Moreover, the aforementioned screens in which items can be found are brilliantly drawn and their vibrant colours and artistic design are in perfect keeping with the game’s flamboyant tone. Additionally, nearly all of the characters that you meet throughout your journey are uniquely designed, making full use of the game’s peppy style. It is a shame then that a large number of these characters are entirely insufferable. One personality in particular is incredibly frustrating, continually interrupting the player when searching for clues. Furthermore, the cast’s intolerable nature is severely compounded by the game’s writing which unfortunately attempts to encompass humour at the expense of likeable characters. A majority of the cast come across as idiotic or simply dumb, and although the game evokes the sense that this is what it was aiming for, it is nonetheless frustrating to play through.

Demetrios – The BIG Cynical Adventure is a fairly underwhelming and disappointing experience. The game’s story is senseless, lacking any feeling of coherence or logic. Similarly, Demetrios’ gameplay is derivative of better point-and-click adventures and does little in the way of trying to differentiate itself from the masses. Moreover, whereas its animated artistic design is certainly the highlight of the game, it is largely wasted on annoying and irritable characters that do little to encourage attachment and are for the most part underdeveloped. The main character, Bjorn, is the epitome of everything that is wrong with the game. Although interestingly designed from an artistic standpoint, the character himself is foolish, irksome and uninspired, which in turn represents the game’s story, characters and gameplay respectively, and encapsulates my entire experience with the game. That said, some fans of the point-and click genre may find some joy in the largely uninventive puzzle design, but the vast majority of other gamers will want to find other experiences to occupy their time with. There are better games out there to be played and there are certainly more enjoyable point-and click titles to experience.

Demetrios: The BIG Cynical Adventure is available on PC.