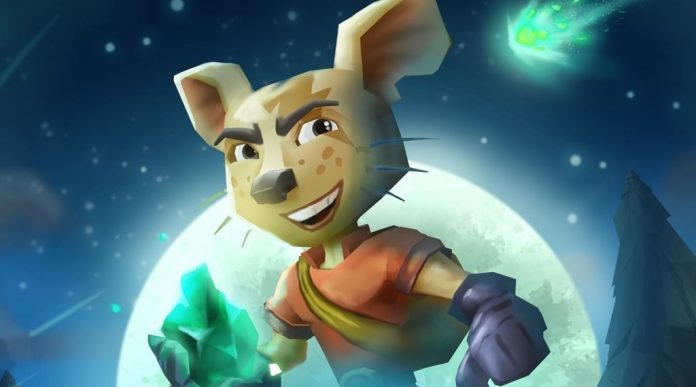 I love video games. Obviously, otherwise I wouldn’t be here.

I thrive on a good challenge too, but the one thing I can never fathom is why some video game developers want to make their game – a supposed tool of fun and entertainment – so infuriatingly challenging that any notion of enjoyment is sucked right out of it. Enter Ethan: Meteor Hunter, a game I certainly won’t be rushing back to play any time soon.

On the face of it, Ethan: Meteor Hunter is a pleasant puzzle platformer, stuffed to the brim with brain-scratching logic and physics-based puzzles that you need to solve in order to get from point A to point B across a number of short levels. Playing as Ethan, a small meteor-hunting mouse, there are three worlds to complete, each comprising 30 levels of increasing difficulty. At first glance, Ethan: Meteor Hunter is your typical platforming trope, filled with the usual traps and pitfalls of any typical platformer: fire, spikes, disappearing platforms, crushing mechanisms. You name it, it’s here and it wants to kill you.

After playing for a few minutes though, you realise that the platform elements – at times, more than tough enough to be a sizable challenge on their own – are merely background noise compared to puzzle solving. Ethan: Meteor Hunter isn’t just a case of moving through a level: you’ve got some serious conundrums to crack in order to get to your goal. Ethan has the ability to freeze time. By collecting “pause” blocks as you progress through the level, you have the ability to freeze the level a limited number of times in order to move around certain elements of the level to get past a particular pitfall or trap. Usually, these puzzles involve moving a couple of wooden blocks to form a bridge or a means of keeping Ethan safe from damage. Often, pausing at the right moment is key; you may have to freeze and unfreeze several times, whilst Ethan is mid-jump, or in order to avoid your wooden blocks being hit by fire. You’ll most likely stare at your screen blankly for several minutes on multiple occasions just trying to figure out how the hell you solve a particularly fiendish puzzle. And they’re all pretty damn fiendish. 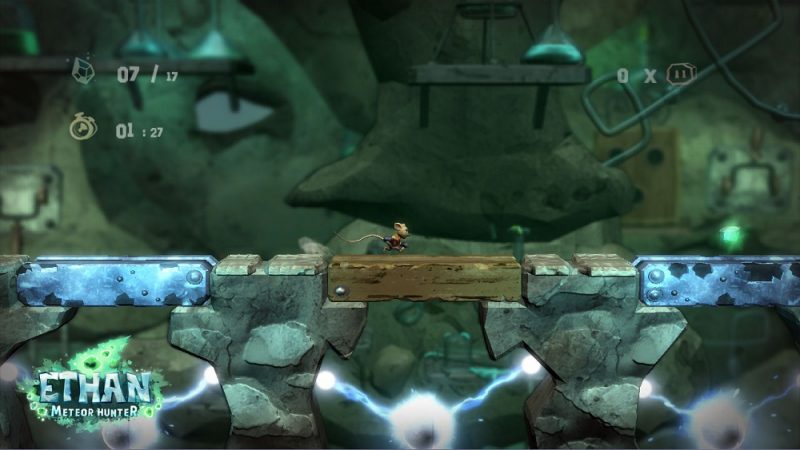 That’s not a problem in itself. A good puzzle to sink your teeth into can be a wonderful thing, and Ethan: Meteor Hunter is, at times, a great workout for the noggin. It’s a strong concept that merges several types of puzzling into one, and sometimes, it works well. It can be a real achievement when you finally figure out how to get past that one tricky bit. However, the issues start to pile up when you start considering the unforgiving platforming elements that you have to deal with as well. Trying to figure out how to best place half a dozen wooden blocks in order to cross the level is an enjoyable challenge, but throwing in perpetual circular blades, pillars of fire or any number of other deathtraps to try and avoid simultaneously just makes the whole experience very arduous. Combine that with less-than-precise controls, huge repetition and a lack of clear explanation, and you’re in for a frustrating ride.

Perhaps it sounds like I’m being nitpicky, but Ethan: Meteor Hunter is just too difficult for its own good. With a pleasant graphic style depicting a cartoonish mouse and a series of blocky 2.5D environments, the entire feel of the game comes off as rather fun-loving and juvenile. The gameplay is very much at odds with its appearance however; Ethan: Meteor Hunter is certainly not a game for children. It almost feels like the developers couldn’t quite decide who their target audience was, and so decided to throw a bit of everything in there. The result is unfortunately a product that is both too difficult for most average gamers and too frustrating for puzzle lovers.

It’s full of small niggles, too. Dying, or failing to complete a puzzle will take you back to the last checkpoint, but should this be before a brief cutscene, you’ll be forced to watch the cutscene again and again. And at the rate you’re likely to fail as you play, you’re going to see the same cutscene upwards of 30 times. Maybe more. It all depends on just how much you can take before you ragequit. I also encountered a couple of checkpoints that respawned me in a horrific death loop of doom. Some areas had homing missiles set to destroy poor Ethan, and for some reason, a couple of checkpoints didn’t only spawn your character but also one of these missiles, meaning the second you revived, you’d find yourself dead again.

I wanted to like Ethan: Meteor Hunter, I truly did. Some of the puzzles were a joy to solve – or at least would have been, if it wasn’t for the barrage of platforming elements intent on killing me. Perhaps I’ve been a little too damning purely on its difficulty alone; after all, games like Super Meat Boy and Braid (the two games cited as inspiration for Ethan) are purposefully difficult and players lap up every death like a medal of honour. Difficulty is fine; we humans thrive on a challenge – but for something to be worth the struggle, it has to have a valid payoff, or at least be an enjoyable ride. Unfortunately, Ethan: Meteor Hunter has neither of those. There’s nothing waiting for you apart from harder, more infuriating puzzles, and unless you’re an actual masochist, I don’t think you’ll find much fun either.

Ethan: Meteor Hunter is available on PC, PS4, Xbox On and PS Vita. We reviewed the Xbox One version.