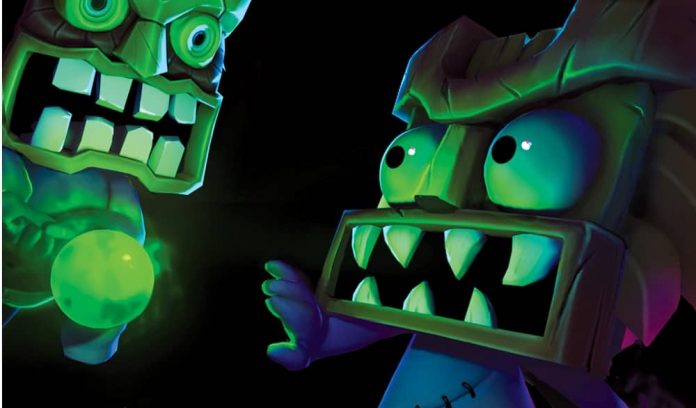 Do you know what is a really cool backdrop for a game that is hardly ever used? Voodoo.

Voodoo settings can be creepy and mysterious and they are full of magic and skeletons. It sounds so perfect for a game it’s a wonder it took until 2014 for it to happen with Over the Top Games’ Full Mojo Rampage. Now, two years later, the game has been ported to PS4 and Xbox One for even more to enjoy – but is it any good?

Full Mojo Rampage is a twin-stick roguelike (or roguelite) and, at first, the combat will feel very similar to The Binding of Isaac. Being a roguelike, be prepared to die a lot and to lose all your stuff to neverending hordes of zombies, skeletons and chickens. There’s a lot of stuff to collect (and lose) here; you begin a playthrough by selecting a “Parent Loa” (or God) to be born under – which affects your two spells and passive ability – and then selecting any bonus Voodoo Pins and Blessings. Once in a game you can find an array of mojos, wands, usable items and extra spells throughout the level that you retain until you die or complete the quest.

Mojos affect all your different stats in minor ways, wands change how your basic attack works, usable items can range from potions to summoning an ally to mini-quests, and extra spells add even more weapons to your arsenal on top of your Parent Loa. Basically, there are a lot of things here that, along with the randomly generated levels and item placements, mean that no two runs should ever feel the same.

The problem is that runs often do feel the same: Wands run out quickly so you are often stuck with your basic attack, spells take time to cool down and the vast majority mojos that you find offer no unique differences. All mojos seem to affect your stats in very minor ways such as a bonus 2 damage or 0.2 movement speed. Unless you get lucky and find something very powerful, most of the time mojos hardly feel as if they are doing anything. 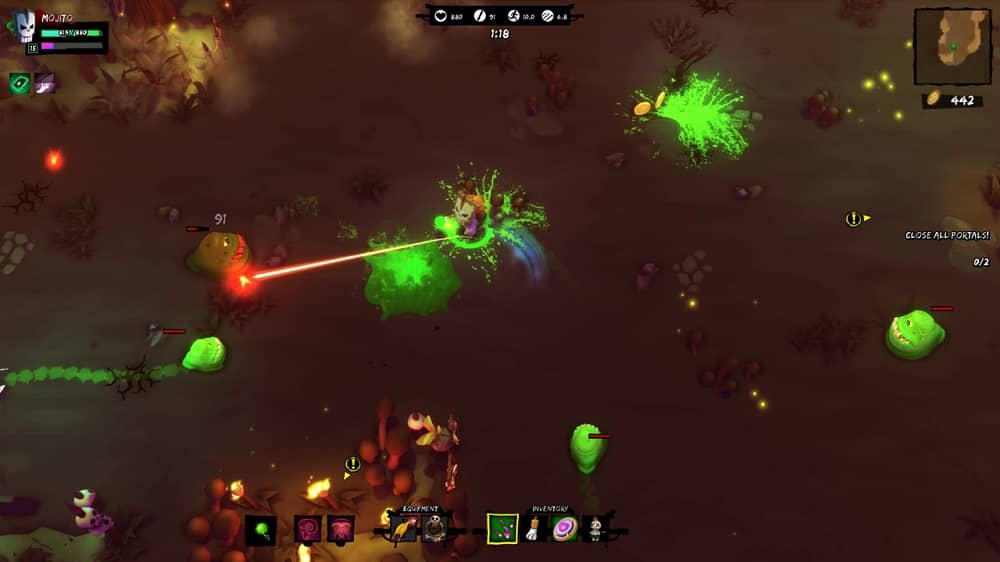 Luckily, Full Mojo Rampage‘s base combat is fun enough that you don’t mind too much. The eight different Parent Loas offer up numerous different playstyles from being a master of totems to being a master of healing. Once you learn to really use the spells and abilities of your class to your advantage, combat becomes much more tight and focused. It helps even more that levels and enemies rarely repeat. You would be hard-pressed to find a better looking roguelike; the voodoo theme adds a creepy and unique feel to a wealth of different maps that are already good-looking. And every map comes with a completely different set of enemies; from cemeteries to swampy bayous to dungeons to lava pits, you will have to change up your combat style every level.

The four main quests, each of which contains around three to four levels, will take up your first couple hours of playtime. If you die you lose all your items and go back to the start although gold, experience and levels carry through. This means that much like Rogue Legacy you will become more powerful as you continue to play. On one hand this means that you won’t be stuck forever on some of the tough bosses but it also covers up one of the roguelike genres main problems that affects Full Mojo Rampage more than most: no matter what your skill or base level, being lucky is the most useful thing. If you get lucky and find a couple items which heavily boost your damage (which is by far the most useful stat) you can be sure you will beat the current quest.

Once you have finished the main quest you can replay them on numerous difficulty settings as well as trying out survival, endless mode, a random daily quest and the multiplayer modes. Unfortunately, on PS4 at least, there is absolutely no-one playing any of the four multiplayer modes – bad news for just after release. Oh, and did I mention there is local co-op? While there are currently no random players you can team up with, you and three of your friends can play through the game together which is sure to bring about even more wacky fun.

Along with a lack of players online, there are also some minor technical issues plaguing the game. Firstly, the audio levels on the main menu and when in shrines are much, much higher than anywhere else – something that will hopefully be patched soon. Secondly, while this is just a small personal issue, I find the HUD is overall too large on console and can sometimes cause problems with enemies hitting you from the edge of the screen while you can’t see them. A cursor to see exactly where you are aiming wouldn’t have gone amiss either.

It’s a shame that many of Full Mojo Rampage’s items end up being inconsequential as otherwise, this is a fun and unique roguelike. Still, putting aside the few minor technical issues, the voodoo theme and the wealth of content on offer manages to be the game’s real strong suit. There is plenty of fun to be had with Full Mojo Rampage – even moreso with friends!

Full Mojo Rampage is available on PC, PS4 and Xbox One. We reviewed the PS4 version of the game. 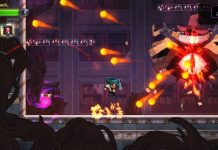