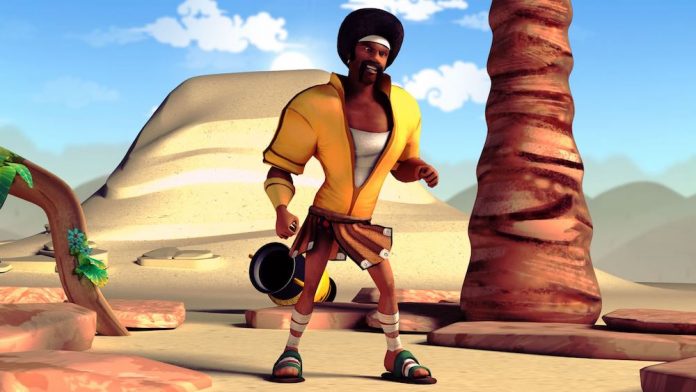 A platformer that’s a blend of music and Greek mythology? Well, now is the perfect time to get your Funk on!

Funk of Titans, from developers A Crowd Of Monsters, is an adventure platformer that focuses around “Funk” being ousted by the emergence of Rock, Pop and Rap that causes humankind to become mindless, dancing minions. So, the Gods of Funk – most notably Zeus – must rectify this problem, sending Perseus to restore Funk across the land and defeating Pop, Rock and Rap along the way! But for a game about Funk, you’d imagine it would have one hell of a great soundtrack, right? Well, no. It’s the same song per world on every level, bar the boss fights. And it’s not particularly funky music either, there’s no hard-hitting bass line or punchy drum beat so it feels a bit slow and methodical, which is a shame as Funk is all about groove and making you move.

Visually though, Funk of Titans does get good marks. The colours throughout the levels are vibrant with a great contrast to make the foreground and detailing really stand out, with a cel-shaded look that reminded me of XIII. The lighting effects are top notch too, especially on the levels that take place after dark or dusk, with eye-catching shadow effects really setting off the level design and detail. I’m not quite sure why Ancient Greece was chosen as the inspiration, but the levels continue with the theme regardless, with every Greek god making an appearance and offering words of funky-wisdom. Even the mythical Pegasus makes an appearance with a dedicated mini-game for each level, which helps break up the worlds and keep things reasonably fresh. The game is also littered with Greek mythology, from Gods to legendary creatures, and plenty of character customisation options from weapons to appearance. 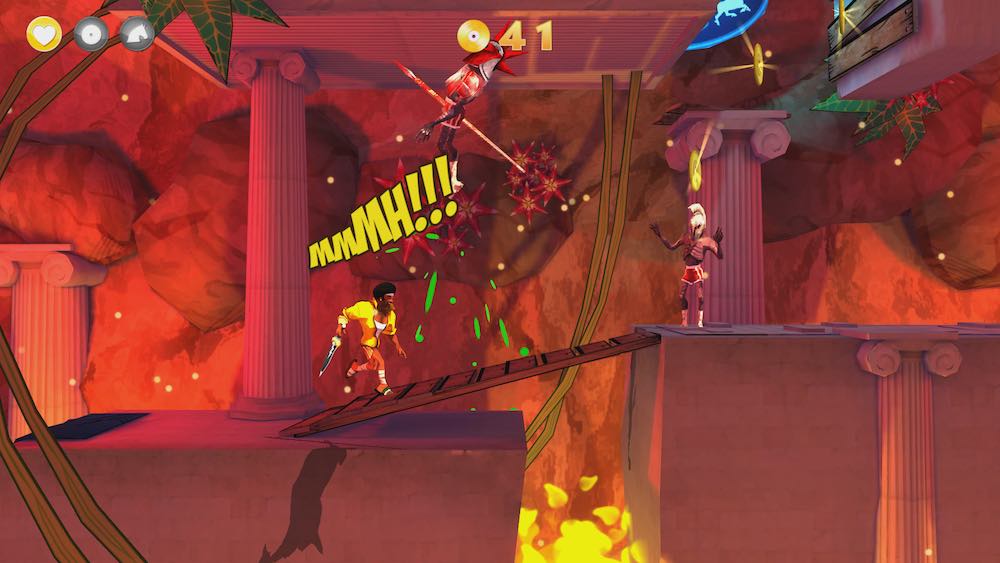 But in all honesty, the game just isn’t very good. Funk of Titans is a side-scroller platformer that never seems to get out of first gear no matter how hard the player tries. You automacially move, so all you can do is jump and strike, but the challenge never advances beyond this. You can upgrade weapons, but it makes no difference and whilst some areas require different weapons to access, that’s only for those who obsess over 100% completion and doesn’t add anything worth noting to the levels. You also can’t easily change direction, so if you overshoot a climb or drop, you’ll be left wondering how to turn round, often running off the level in the process and dying.Even the boss matches don’t offer any excitement as the fights are nothing more than a quick QTE instead of a climatic fight focusing around the core aspect of the game: platforming! It feels like a lazy way of padding the game, and requires zero skill, which surely defeats the point of a boss fight in the first place.

Although the game does have 40 levels which sounds plenty, these are spread across the three worlds of Pop, Rock and Rap, so there’s ~13 levels per world, each of which you can beat within a few minutes and don’t offer enough variety as you advance becoming repetitive quickly. The music and effects certainly don’t help, with your character dropping the same 5/6 quips every level and some sound effects being noticeably louder than others. I actually ended up turning off the games soundtrack/effects and using a “Funk” playlist on Spotify! Contrary to belief, Funk of Titans is not a fast-paced platformer as you can’t increase character speed beyond auto-run – and the levels never really evolve from the first few you learn on, so once you’ve double jumped off minions and used the speed/jump pads, that’s pretty much it in terms of gameplay. The difficulty never evolves past “defeat more dudes” and whilst the Pegasus mini-game is a nice break from the levels, its a Flappy-Bird stylised clone so stagnates just as quickly. 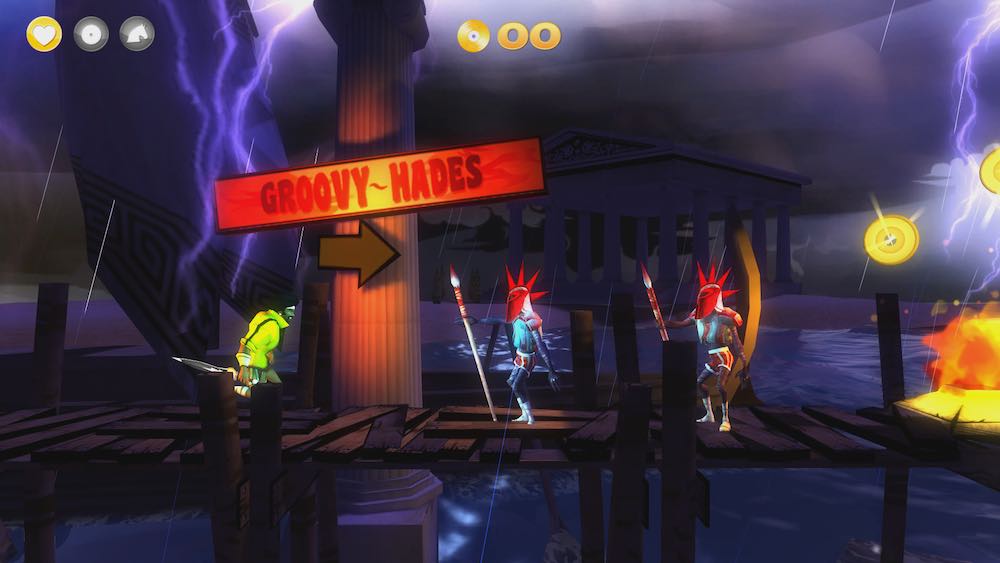 This isn’t helped by clunky controls and a serious delay between pressing a button and the character responding. Jumping is the main culprit here, with the delay being slightly longer than you think, and coupled with a static jump arc, means you’ll miss ledges and wall jumps with frustrating regularity. With that in mind, Funk of Titans does allow some ledges to be “grabbed”, so mistakes don’t cost you the level, but sliding vertically down a wall or a downward slope still gives you the same horizontal jump-arc, killing any sense of speed or pacing the level has tried to create. The jumping motion doesn’t fit in with any movement bar running on a flat surface, so it’s a visual blemish, which is a shame when the game is so visually pleasing.

Funk of Titans feels like a free game you’d download from the app store to kill a few hours and then delete the same day. If it was free, then you could justify the short repetitive gameplay and clunky controls, but given that it costs £4.99, you’d be better off buying a book or a few CDs, both of which would last a lot longer and will give you more enjoyment.

Funk of Titans is available on PS4, Xbox One and PC. We reviewed the PS4 version.