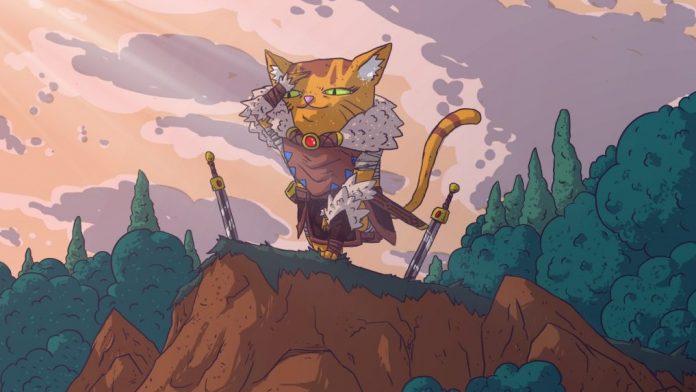 Hunter’s Legacy is a new 2D platform-action game out on the block, and I can honestly say it’s one of the best of the genre I have played in years.

Made in Unity by a small dev team, Lienzo, this title is full of personality, complexity and showcases a phenomenal understanding of level design reminiscent of the original Dark Souls.

Our story begins with the people of Iripur, a small town in the mythical land of Un’Amak that relies on the magical “Fang of Alliance” to maintain its peace and keep out the dark. But, disaster strikes when the dark lord Moridir steals the Fang for his own ends. Thus, the hero Ikki must set out on a quest across treacherous and monster-infested lands to reclaim it. It’s a simple and rather clichéd premise, but done with such affection and understanding of traditional quest stories and that one forgives it. In addition, rather like Watership Down, the world has been animorphised, which distances us from the traditional aesthetics of this type of fantasy story (while still allowing us to be gripped by its mechanics).

There are hints of something Celtic about some of the character and landscape designs (such as spiral circles engraved on stones) and at the same time the music, colour-scheme and even some of the enemies suggest Indian influences, making the world feel truly unique. This universe is inhabited by khajiit-like cat-people, lizardmen and other sapient animals. The art style is cute but not saccharine, and the character designs are intriguingly detailed, giving them a sense of three-dimensionality even though the dialogue is minimal. One such inhabitant who can be found in the wilds is a mysterious hermit wears a veil which covers the face and entire body, revealing only the pawed feet. Like an old-school NPC, the design of this character immediately draws our eye and make us want to engage with them.

At first it seems Hunter’s Legacy is a very linear experience as you journey through the starting area of Oma Forest, but after reaching the town of Iripur, multiple pathways open up and a world map becomes available, showing numerous locations, each one often containing multiple stages. Undiscovered locations show merely an ominous “?”. Teleportation gateways can be used to travel between these stages, but to access many specific, secret places you will also need to remember pathways, giving the world a sense of reality and tangible landscape. There are numerous memorable locations on your journey: the haunting goblin-infested Willow Forest, the dangerous pathway to the Temple, guarded by lizardmen, and the Lullaby Swamp. Each area has unique design elements which make navigating them intriguing. To overcome the many seemingly impassable segments of the Swamp, you will have to harness the strange air-bubble emitting fauna around you, whereas to get through the Willow Forest, you will have to hack down the tall, sticky grass, lest it paralyse you and make you prime target for arrows. These are just to name a couple of many different mechanics awaiting the player. Many platformers simply re-skin the level every so often and up the difficulty; in Hunter’s Legacy we are treated to a real, diverse adventure experience. It makes the game addictive and fun. I constantly wanted to get through to the next stage just to see what it would throw up against me. It helps that all of the locations are also very beautiful from an artistic standpoint, and loaded with secrets. 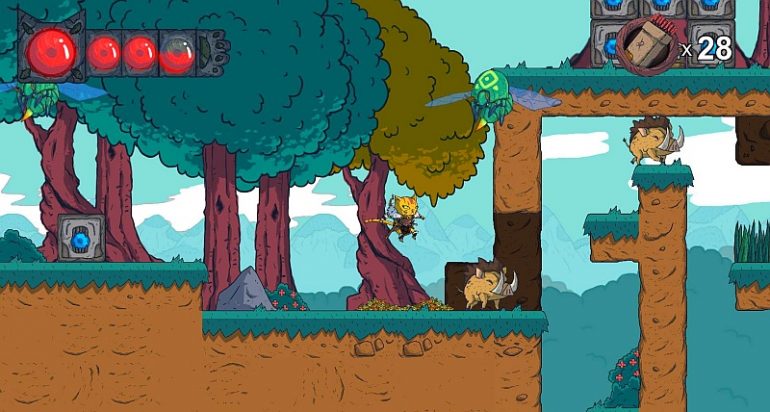 Hunter’s Legacy is rife with mechanics that give it far more complexity than a simple platformer but at the same time never make the game overly difficult to manage or master. There is currency, which can be used to purchase items; enchanted ore, which can be spent to upgrade aspects of your character such as health or the power of your sword; you have a rolling ability, which can be useful for dodging ranged attacks in particular; your character can not only jump but also hang onto ledges or cracks in the rock, offering a whole new spectrum of platforming, such as descending into a canyon by jumping from wall to wall, carefully trying to catch onto the ledges. Later in the game, you will acquire a bow which can be used to make ranged attacks but also to shoot certain types of switches. When your bow becomes upgraded with magical arrows, it can be charged up and used to destroy obstacles. This is only a glimpse of the numerous pieces of equipment you can acquire to help you defeat the game’s challenges. The breadth of this game and the possibilities of customizing your strategy with different equipment and upgrade paths give it the feeling of an RPG but without the sense of dauntingly huge choice. There is enough to feel in control, to feel like you are having a personal experience, but not so much you are paralysed by indecision.

One small criticism is that not all of these routes are equally developed. Though the inclusion of the roll makes for an interesting twist of the platformer genre (yet another Dark Souls influence), it’s lack of application in melee combat renders it slightly redundant at many stages in the game. Charging up the magical bow allows it to destroy obstacles, but does not seem to do more damage to enemies, which again renders it less useful. These are little gripes, however, in an otherwise well-tuned and enjoyable gaming experience.

The levels seem to have been designed with a similar philosophy. They are huge and sprawling, but if you know what you are doing and how to use the teleporters, you can begin to get a handle on the map, just as in Dark Souls once you start to initiate the shortcuts, the once colossal, vertigo-inducing scale becomes manageable and navigable. There are often multiple routes, but once you have been through a path a few times you realize it is not as long as you thought. The difficulty scale of Hunter’s Legacy similarly seems steep at first but, after re-evaluation and a little lateral thinking, becomes a slope that can be scaled. 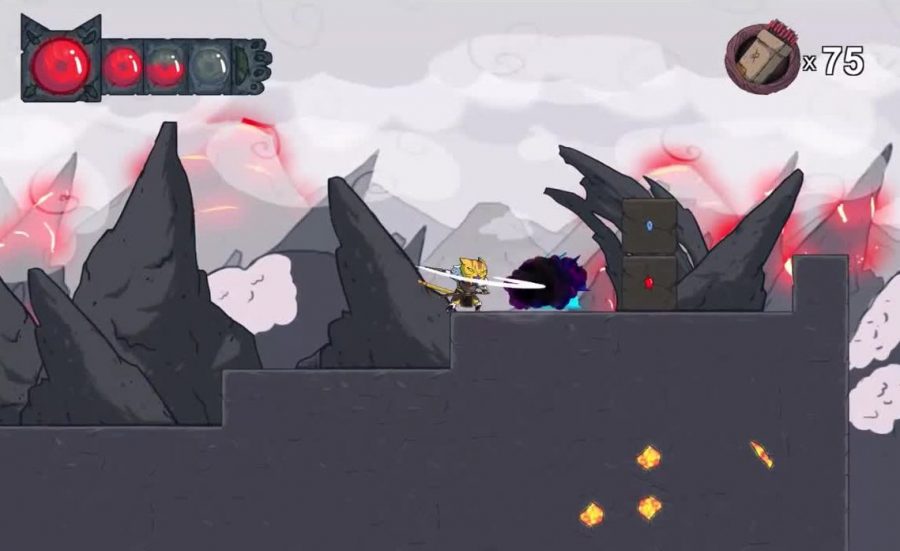 It is clear the developers have taken a lot of influence from Miyazaki’s sensibilities of game design, if nothing from the aesthetic of Dark Souls. The enemies often present unexpected challenges. Unlike most action-platformers, such as Bard’s Gold, in which the enemies seem purely designed to slow down your progress and artificially extend the length of the game, the enemies in Hunter’s Legacy are part of the landscape, story and experience. Hack into the goo and it splits into multiple little goos, a mechanic we have seen before. But then, kill the little goos and you’ll leave a puddle on the floor which can transfix you to the spot like stuck-in-the-mud. Only a ground-directed attack will remove it. Gotcha. This enemy has two devious tricks. Now fight four of them at once. There are flying thorax-heavy hornets, annoying goblin-like creatures in stupid hats who shoot energy balls at you, and seemingly innocuous little grey bugs which swarm, jumping like eager ticks. The diversity of enemy-type really makes the universe of the game come alive and their developed AI (they will actually chase you across platforms, something I’ve virtually never seen in a 2D platformer), makes for an entertaining challenge and, strangely, a sense of realism. There are also occasional boss fights. Whilst this, for me, was one of the less exciting aspects of the game (I never seem to find 2D boss fights that exhilarating for some reason), it still makes for a great challenge that breaks up the explorative platforming. Working out the tricks and weaknesses of a boss is a satisfying experience and their designs are in keeping with the game’s original aesthetic.

A minimalist playthrough from start to finish proves a medium-length experience, but if one wants to find all the secrets and pathways and locations, Hunter’s Legacy becomes a really immersive proposition, one that rivals even AAA RPG titles. The price of the game is highly reasonable given how fun it is and the extent of the content. According the developers there are further games planned in the “Universe of Something” series, and I, for one, am excited and expectant for their next title.

Hunter’s Legacy is available on PC.