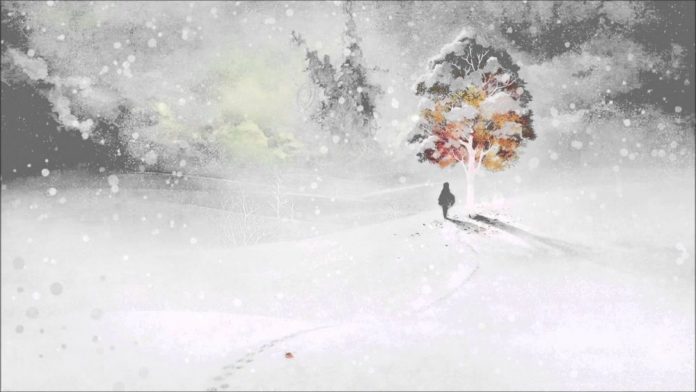 Factpinion: Chrono Trigger was and is the greatest game ever made.

With that in mind, I hope you won’t judge me for telling Kim that I would be willing to knife fight anyone in the office for a crack at its spiritual successor from SquareEnix and Tokyo RPG Factory. While Diggy’s alright with a peaky blinder nothing could have prepared him for a six-inch knife named after one of the hardest men to ever die for no reason. So while he nurses his wounds let’s talk I Am Setsuna.

You are Endir, the stoic, silent warrior of an isolated tribe of mercenaries that will take on any job they’re offered. Your latest commission is to find and assassinate “the sacrifice”, a young girl chosen once in a generation and sent from a specific village to the Last Lands in order to act as a blood offering to stem the tide of monsters flooding into the world. Upon meeting Setsuna and her guardian, Aeterna, you decide to help see her pilgrimage through to its completion. What follows is a tale of friendship, love, loss and redemption. Mostly.

I Am Setsuna’s narrative is strong for a Japanese localisation. Conversations move quickly, the dialogue is mostly convincing with a strong sense of characterisation, and repetition and exposition are kept mostly under control. It also doesn’t tread any new ground or offer anything even approaching a moving story moment. Its attempts to subvert or transcend the often tepid storytelling of its genre trip and fall over its adherence to prototypical homilies about friendship, peace, love, and universal acceptance. I Am Setsuna plays it safe and succeeds within those confines but does so only on the strength of its other elements. 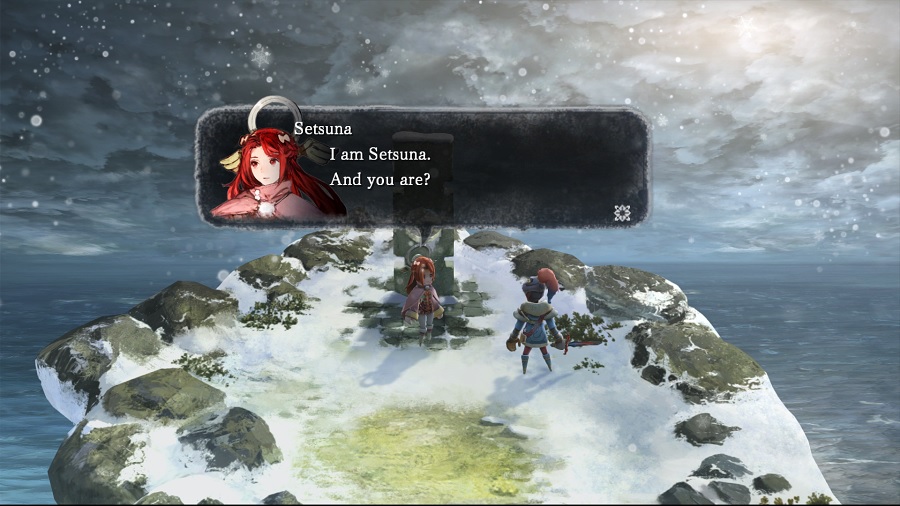 I find pacing to be one of the most important elements in a good RPG. A little over 20 years ago Square delivered a masterclass in RPG pacing with Chrono Trigger. A lesson that the entire industry, including Square themselves, proceeded to ignore. Where Final Fantasy and Dragon Quest inflated play time with hours upon hours of pointless, low level grinding through random encounters, Chrono Trigger entirely flipped the script by making combat an intrinsic and progressive part of every environment in the game. I Am Setsuna has learned this lesson well, placing enemies carefully between you and your next objective but only enough to keep you engaged, interested and moving forward to the next boss or story beat. Grinding is practically unnecessary and, as a result, it never feels like I Am Setsuna is looking to simply waste your time, a design decision I can always appreciate. That said, there was still some sag in the later half of the game as the environments grew and it started to feel like the developers were trying to hit an arbitrary “Over XX hours of gameplay!” tick for the back of the box but the resulting meal is mostly nutrition with significantly less filler. And the filler isn’t so bad anyway because where I Am Setsuna most resembles its spiritual predecessor is in its great combat system.

You enter combat by approaching an enemy from the front (which begins combat normally) or from behind (which gives a full ATB gauge and some momentum). Those familiar with SNES-era Final Fantasy games or the Chrono titles will recognize the Active Time Battle (ATB) system. Basically, a gauge fills up under each character’s portrait denoting when their turn in battle will occur. Once the gauge is full that character has the option to attack an enemy, use a technique, or use an item.

The first point at which I Am Setsuna diverges from the typical ATB system is with the introduction of “momentum” to the battle. Once a character’s ATB gauge is full their momentum meter begins to fill as long as they don’t take an action. Once the momentum meter is full they earn a point of momentum (up to three points total) that can be used by pressing the square button at just the right moment when executing any action. This will add an additional useful effect that can range anywhere from a little extra damage, to a guaranteed critical hit, to the action’s effects applying to all enemies or allies on the screen. This creates an interesting risk/reward dynamic in some of the boss fights that has you carefully figuring out how long you can keep each character waiting to maximise the effects of their attacks and techniques without putting them at risk of defeat.

The next point setting it apart is actually a staple from Chrono Trigger‘s ATB system with a few new tricks. Multi-techs allow two or three party members to burn their ATB gauge to team up and turn their default single techs into powerful and visually stunning double or triple techs that can turn the tide of battle when properly timed and utilised. 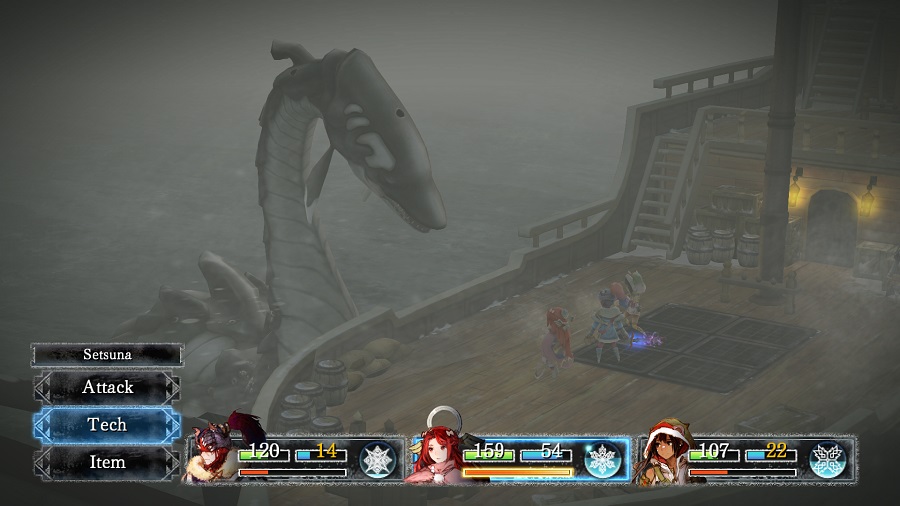 That alone sounds like nothing more than what already existed in Chrono Trigger but where I Am Setsuna diverges is in how characters obtain and equip techs in the first place. At the end of every battle you earn materials that can be sold at a vendor to purchase magical stones known as “spritnite”. Equipping them to empty slots on your characters will give them command techs that can be utilised in combat or passive techs that provide them with specific buffs or effects that augment their abilities. There are also talismans that can increase the number of spritnite a character can equip and extend the effectiveness of your most used techs over time with “flux bonuses” that occasionally attach to them at the end of combat.

This makes building a party an exercise in fine-tuning the interaction between spritnite, talismans, and flux bonuses to create synergies that will keep your characters buffed and healed while debuffing and dismantling your opponents. It’s awesome. It’s really, really awesome and clearly the element Tokyo RPG Factory spent the majority of its time and attention on.

It seems to be where they spent the majority of their budget too because I Am Setsuna will almost certainly not impress in the audio/visual department. It’s not ugly or offensive and benefits from some strong art design but there’s no Akira Toriyama to hold it all together. No Yasunori Mitsuda. No Frog’s Theme. Its presentation is modest. Humble even. All no-frills 3D sprites and a single piano tapping away at what could have been an impressive orchestral soundtrack. And Square Enix seems to know this as I Am Setsuna is positioned as a budget digital title released as background noise, lost among the deafening shout that is their promotion of Final Fantasy XV.

This is almost certainly the fanboy in me talking but I Am Setsuna deserves more. In 1995 Square brought together five top artists in the industry and gave them whatever they needed to produce the greatest game ever made. Two decades later their legacy is being used to timidly test fan nostalgia when, perhaps, another dream team left to its own devices, unfettered by the weight of a cultural and artistic behemoth is what’s really needed. God, I want another Chrono Trigger so much and I Am Setsuna comes as close as any attempt possibly could, but, of course, it’s only an echo. An imperfect reality existing only to remind me of the most beautiful dream I ever had.

I Am Setsuna is available on PC and PS4. We reviewed the PS4 version.