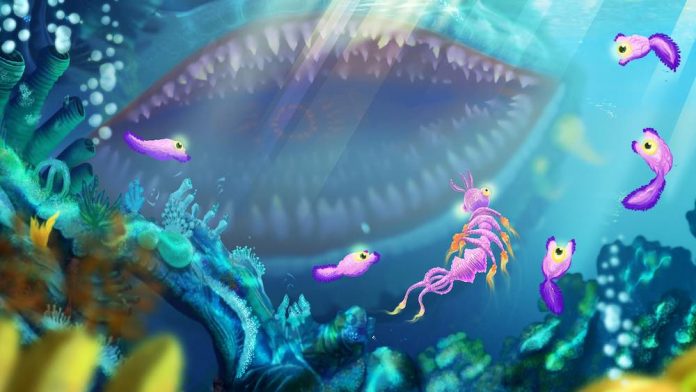 Every now and again you encounter a game where you really don’t know what to expect.

For me, Into the Belly of the Beast from Lucky Brograms and Visionary Software was one such title. I hadn’t even heard of this game before it came in for review, let alone know anything about it, so I approached with a clear mind and no preconceptions – which is probably a good thing as these days we often tend to make our mind up about many games before we even touch them! I think this might be the reason that Into the Belly of the Beast has left such a big impression on me.

On starting the game, my opinion of the game wasn’t quite so glowing; you launch almost straight into the game and then you get a fairly brief intro after you actually hit the start button. This introduction doesn’t really explain what the story is and just sees a funny looking sea creature being eaten by much bigger and uglier one. Graphically, the sequence looked really rough with almost PS2-quality 3D and really made me nervous for the quality of the game ahead. Fortunately I didn’t need to have worried; wow, I was soon proved wrong! The moment you start the game you are almost overwhelmed by the beautiful visuals and soothing orchestral score. The game sucks you right into it, showing just how immersive games can be – even without an expensive VR headset.

You are introduced into the game at a nice sedate pace, with the whole first level serving as a tutorial. The basic structure of Into the Belly of the Beast involves guiding your strange looking creature, named Sploosh, through the whole body of a monster to rescue your young and escape. Sploosh can move in any direction and bite; there are also basic interactions that can be performed with your surroundings.

As well as fellow swallowed sea creatures that attack you, there is a range of other hazards that need to be negotiated. These include actual parts of the monster and fairly simple puzzles that need to be solved, usually taking the form of buttons that need to be pressed or objects that need to be moved. There are also points within the beast that are electrically charged – you use these to charge up Sploosh and then you can release the charge when needed. This is usually used to open up ventricles and body chambers so you can progress. 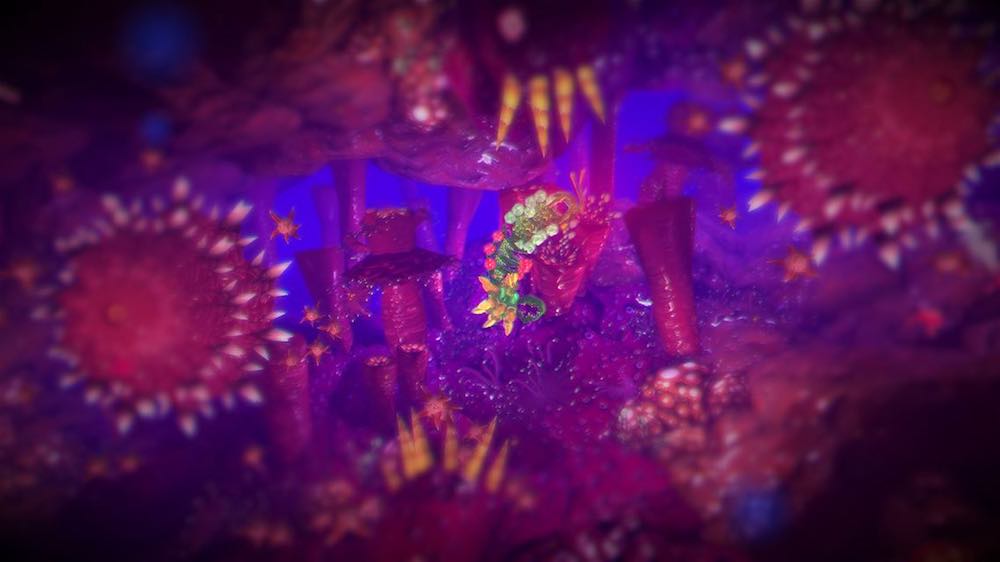 Probably the key feature of the game though is the use of DNA. There are different types that can be collected by just eating them and these are defined by colour. Often you are presented with more than one type at a time so you need to work out which one is the best for your progression. For example purple DNA allows you to activate a limited speed-up, to escape a hazard or dive through an opening, while green DNA can be used to scare enemies away. The DNA also has a big effect on the other creatures in the game: enemies that match the colour of your collected strands will now become your friends and will even help you battle other coloured foes. There is also bonus DNA that you can collect, which is usually well hidden so requires lots of searching to find. Sploosh only has a limited amount of health, but this can be replenished by eating other smaller creatures. There are also checkpoints that can be activated so if you do die you are never sent back too far.

The heart (rather than the belly) serves as a central hub; when you complete a level you always arrive there first before progressing further. It’s a handy pitstop though, as here you can find health, DNA and a kind of encyclopaedia where you can read up on all the beasts you encounter and add them to your collection. Each level takes place in a different part of the body and adds its own hazards to the equation. The difficulty ramps up quite slowly so you can progress quite far into the game fairly quickly. This also allows you to learn the game and its different features much more efficiently, meaning it never really feels unfair or hits you by surprise with something you can’t handle – thus avoiding the annoying grinding that many modern games seem to insist on.

Into the Belly of the Beast is available on PC and Xbox One. We reviewed the Xbox One version.