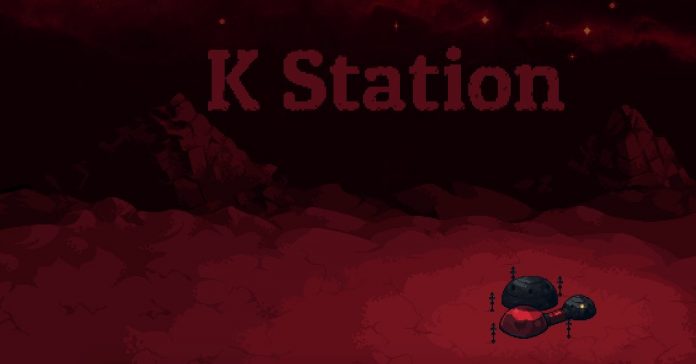 On K Station, a space station on an unknown planet, things are about as normal as a sack of talking potatoes.

Things were totally fine until Dr. Maya, a crew member on K Station, was assigned to investigate an anomaly outside. After that first bright, blinding light, everything just seemed a little… well, “off”. K Station is a puzzle-heavy adventure game where you play as Dr. Maya as she tries to figure out what on (not) Earth is happening on the station and where all the crew members are disappearing to.

I’ve played a lot of point-and-click adventures in my time, but not many look-and-type adventures – which is basically what K Station is. The two controls in K Station are pretty simple: move with the control keys and use your keyboard to type commands, starting with a verb, in order to tell your character what to do. For example, “Look at the desk”, “ask Barry about music”, or “Open doors”. This type-a-command control system added a uniqueness to the game that makes it stand out from many of the other indie puzzle adventures on offer. K Station’s lead developer Yash Parghi could have easily made it just like any other point-and-click game, but adding the element of figuring out what you need to type in order to achieve a particular goal made the game immensely more fun and interesting.

K Station’s puzzles really had a way of making me want to rage quit while also making me want to just grin and bear it and figure it out. I wouldn’t say that the puzzles were nitpicky, but they could be a bit frustrating at points. At the beginning, there are tons of possibilities in regards to the typeable commands. As you can talk to everyone on the ship and look at or interact with even more, it’s hard to discern what is and isn’t important. Some items that you couldn’t use since the beginning of the game would soon be useable. It took me a little while to catch on to this. With that being said, if I ever got really stuck there is a hint option where at any time you can type in “hint” and the game will help you out. This made it so the few times I got stuck I just had to read the hint over and over until I finally got that “AHA!” moment. 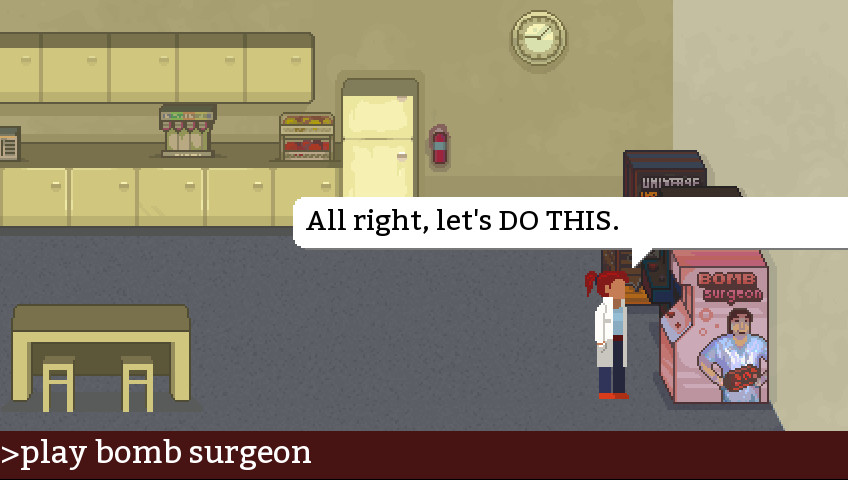 The best part of K Station by far are the characters’ personality and witty banter. Realistic dialogue in games is hard to come by sometimes but these characters’ conversations always seemed really genuine and overall very funny, especially the hilariously sarcastic protagonist Maya whom you play as. I have this game to thank for giving me two new lovey-dovey names to call my friends and loved ones: Parsnip and Moosh. So romantic, I know. I will also probably try using “chess” as a code word for *ahem* – nevermind. Kudos to the brilliant writing done in this game that really makes these characters stand out.

K Station also uses beautiful pixel-art graphics, which I know some people might be getting tired of, but I can’t get enough. When it’s done right, pixel art can be just as great as what the kids are playing these days with their Call of Duties and “Unmapped 4” – or “Not Charted”, whatever. That’s not important. What is important is that with some pixel art games it’s nearly impossible to tell what you’re even looking at and K Station’s graphics and animations were done very well. The colours look great, it’s easy to tell what everything is; it’s simply flawless.

I honestly tried to find something negative to say about K Station and all I could find in my brain was that the soundtrack is sparse, and perhaps isn’t anything to be terribly impressed with. But, to be fair, this really didn’t affect my enjoyment of the game at all so I’m not sure that it even counts. The ambient music was pretty good and atmospheric; just perhaps repetitive. The only other thing is that for people who hate getting stuck in puzzle games, maybe this game isn’t for you. I felt as though I would get stuck every 20 minutes or so, but it’s truly satisfying when you finally figure it out.

So, K Station may not be for everyone, but for anyone that loves the puzzle genre and minimalist indie games then this game is a definite “needs to be played.” Mark it off on your lists friends. I would even say that for people who enjoyed Her Story, the FMV game where you have to type commands to solve a mystery, might enjoy this. It’s a lot of trial and error which is very similar to Her Story. I absolutely recommend picking up K Station if you love a good mystery and you love solving puzzles.

K Station is available on PC.