Have you ever solved a Chinese wood knot?

Maybe you attempted one without even knowing its name. Just in case, allow me to explain: a Chinese wood knot is a mechanical puzzle made up of interlocking blocks or pieces – often made of wood, hence the name. To solve a wood knot, you must physically move pieces in the correct order to remove them from the knot. Once only one piece remains, the puzzle is solved. Knot, developed by Warlock Arts, is exactly what I have described above, excluding all those wooden blocks cluttering up your living room.

Knot presents its puzzles as floating objects in front of a static background. Using the left stick rotates the entire knot, while the touch pad acts as a cursor to select individual pieces. Once a piece is selected, the piece may be moved up, down, left or right using the right stick. Initially the controls may seem mildly awkward, but shortly after they become quite comfortable. I did not expect to enjoy using the touch pad, though thankfully it never felt intrusive. In fact, after 10 or so puzzles I began to enjoy using it.

Warlock Arts emphasises “realistic graphics” and multiple materials (wood, copper, stone) that “allow you to feel the textures and how differently they interact.” While the different materials are a nice touch, they do not do anything to impact the gaming experience. Static backgrounds can be changed via the options menu, where there are nearly 50 images to choose from. Once again, they’re a nice addition but are only cosmetic. Overall, the presentation is simple to the point where it does not distract from puzzle-solving.

Now, the most important part: the puzzles. The early levels provide the player with a welcoming difficulty curve. Basic strategies are taught through trial and error as you rotate each puzzle and test each piece’s capacity to move. In some of the earlier levels, I managed to solve the odd puzzle just by testing each piece and seeing which one moved. However, this strategy – or lack thereof – becomes much less beneficial as puzzles grow in complexity. When trial and error becomes pointless, more elaborate puzzles feel thought-provoking and extremely engaging. 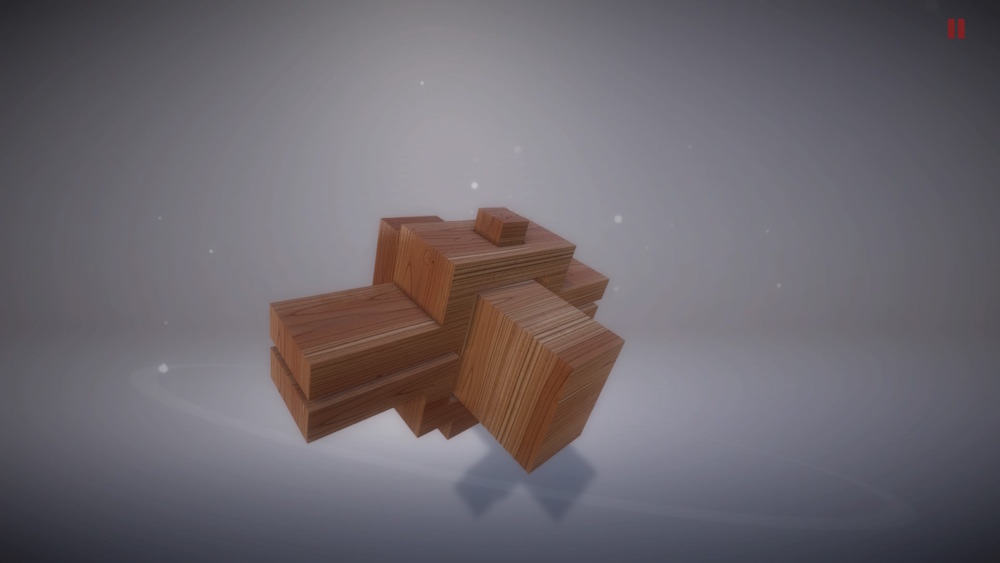 Let me preface by saying that I am not a seasoned puzzle veteran. I enjoy them, but in no way would I be considered an expert. That being said, Knot contains 40 puzzles to dissect and solve. The later, more advanced puzzles range from respectably difficult to rage-inducing. On a couple occasions, I felt the need to get up and take a break. Conveniently, this often helped me bypass the puzzle that previously frustrated me. By and large with puzzle games, however, your level of experience and skill determines just how well you fare. If your level of puzzle confidence and expertise exceeds mine (which is likely), then you may have a different experience altogether. Regardless, the soothing music soundtrack is sure to put you at ease when times get tough. In many cases I felt genuinely soothed as I experimented with each new puzzle.

“Here, what you see is what you get. Gameplay never expands beyond the same principles of rotating, testing, removing, and repeating”

It is unfortunate that Knot does not incorporate new gameplay elements as you progress. I understand that Chinese knot puzzles follow a specific formula and leave little room for variation. However, puzzle games typically introduce new game elements to add new layers of depth. Here, what you see is what you get. Gameplay never expands beyond the same principles of rotating, testing, removing, and repeating. Knot does not utilise the fact that it is a video game; it is unabashedly simple and no different from having real wood knot puzzles in front of you. This is unlikely to bother someone looking for exactly this, but puzzle game veterans would likely feel unsatisfied.

There really isn’t much else to discuss about Knot; it’s an okay game in its own right. Ultimately, it is a simple puzzle game with some enjoyable gameplay that never expands beyond its original premise. The difficulty curve is reasonable and those looking for a game of this kind should know exactly what to expect. The calming soundtrack is sure to help prevent you from pulling out your hair, should the need arise. However, those looking for an expansive puzzle experience should most probably look elsewhere. For me, personally, the thought of reliving some of the more difficult levels has my stomach tied up in knots.

Knot is available on PS4.