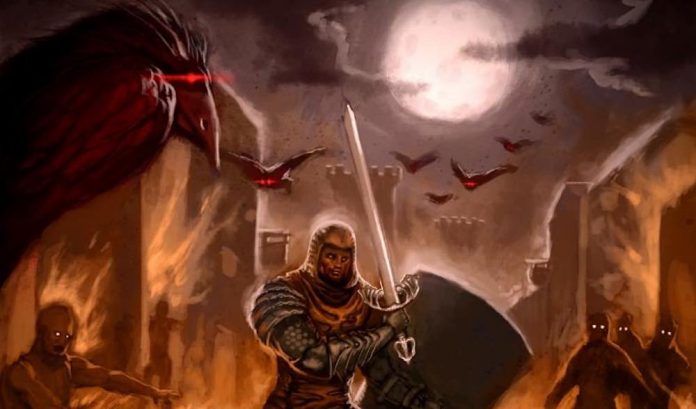 Just recently I reviewed Cast of the Seven Godsends, a new retro-styled game that is heavily inspired by Capcom’s classic Ghosts ‘n Goblins.

In that review I mentioned that there was also another game along very similar lines, inspired by the very same arcade machine: Maldita Castilla EX. Like Cast of the Seven Godsends, this title also originated on the PC, where it debuted to great acclaim. So let’s see if Abylight Studios’ game can get right what its rival got wrong and bring the true retro arcade experience home – without the need to throw your controller at the wall.

I got straight to the point with my review of Cast of the Seven Godsends, so I think I will do the very same thing here: Maldita Castilla EX is very much the better game. It’s no easier mind; just like the original Capcom arcade game that inspired it, Maldita Castilla is brutally difficult. But the big difference here – and this is a big but – is that that Maldita Castlilla EX isn’t unfair. When you die it’s almost always your fault, can almost always be fixed with another try, and genuine progression is possible with every play.

It also offers a lot more in terms of content too; this game has a total of eight stages (as opposed to 6), around 50 different types of enemies (including nearly 20 different bosses), four alternative endings, 15 different unlockables and eight different screen modes. The amount of content shoved into this package is very impressive, yet it never strays from its simple retro roots and remains incredibly authentic to its arcade origins right down to the pseudo scanlines on the screen.

Like Cast of the Seven Godsends, Maldita Castilla EX also has a nice little back story, the difference is that it isn’t forced upon you and doesn’t require you to skip through seemingly endless pop-up boxes of dialogue. It’s put pretty simply for those that care: “The tears of a young witch have been turned by a demon into a key that opens up a gateway for the evil in this world. The King Alfonso VI of León has gathered his loyal knights to get to Tolomera del Rey and finish the nightmare using the power of the Witch’s tears.” Alright, so, let’s go bash up some demons and rid the world of evil then? Sounds pretty standard to me. 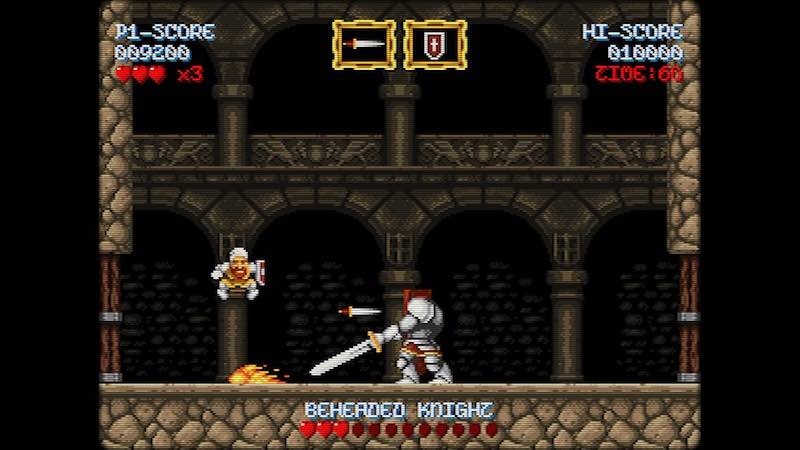 The gameplay itself very similar to Ghosts ‘n Goblins: there are no fancy power-ups here, just your suit of armour, shield and sword. Although these can be upgraded, it’s a very simple system that doesn’t require any complex control systems (yes, we are looking at you Cast of the Seven Godsends). You have a small health bar that can also be replenished by picking up hearts as well as a time limit and continues. Although the game does require some platforming, there are no really unfair jumps and you spend more time killing the many enemies on offer. It’s all pretty standard stuff really that will be more than familiar to fans of old school arcade games.

Graphically Maldita Castilla EX is beautiful; so much love and care was put into every pixel on the screen and the addition of scanlines create an almost perfect arcade experience. The sound is also superb and features a range of wonderfully composed chiptunes. The controls are tight and, as I previously mentioned, although the difficulty curve is set really high, it never feels unfair and genuine progression is definitely possible. I must also give a really special mention to the game’s intro/start-up sequence. The developers recreated exactly what you would see when booting up an original coin-op video game – right down the RAM and ROM checks! This really raised a smile on my face and gave me a warm fuzzy pang of nostalgia before I even started playing.

Basically, Maldita Castilla EX gets everything right that Cast of the Seven Godsends got wrong and doesn’t drop a single ball along the way. This game won’t be for everyone – yet again the difficulty may put off some players – but it will certainly please anyone who grew up in the golden age of the arcade game (like myself). Anyone looking for a challenging action-packed 2D adventure won’t go far wrong with Maldita Castilla EX.

Maldita Castilla EX is available on Xbox One.