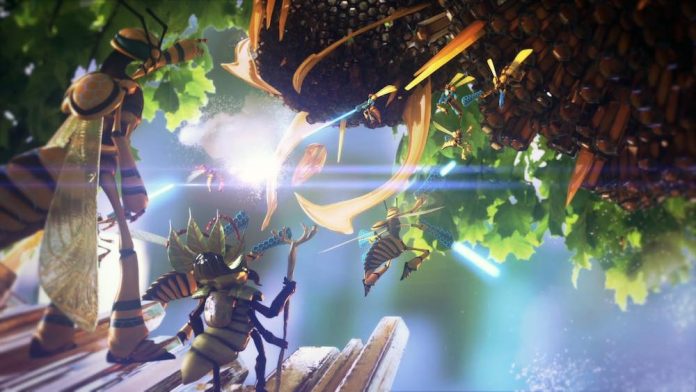 The premise of MilitAnt is simple.

So simple, in fact, that the name may well have given it away already. You take charge of a militant-Ant, caught in a 2.5 dimensional, side-scrolling war that’s consumed the insect world. The ants, termites, wasps, beetles and even the scorpions are fighting an all-consuming battle for control of their most precious resource: crystals. But is this fight one worth joining?

2013’s Outlast (a participant in no less than three of GameSpew’s Top 10 Lists) was a great game, but your introduction to the madness (a mysterious letter left on the passenger seat of your car) lead you to expect a much lower budget romp than what actually followed; which was, as it turned out, a few hours of being enthralled and terrified in equal measure. Conversely, MilitAnt uses a grandiose voice-over, befitting the military style of the game with a bold, almost cel-shaded quality to accompany it, giving a positive expectation of what’s to come.

A well founded expectation, it turns out, as the following few hours will be spent splattering bugs with a rocket launcher or riddling others with pebble bullets from your machine hun. As an ant, you have six limbs; two legs and four arms. Each arm comes with a pistol in-hand which are fired with the left or right trigger. As you progress, you can earn gems by either completing objectives like finishing a level under the set time, killing every enemy along the way, or simply by collecting the gems you see in the levels themselves, which are usually hidden or tricky to get to. The gems you collect can then be used to buy new guns in the armoury which you’ll visit in-between levels. These new guns then replace the pistol in whichever hand you assign them to and will accompany you until you swap for something else.

Weapons can be cycled through on-the-fly, so if your pistol or machine gun overheats you can let them cool off while a tap of a button will bring both of your other arms in to play. You can also quickly switch between individual arms so you’re never out of options, and if all else fails, you’ve also got a melee attack in the form of a bowie knife for a good amount of damage at critically close range. 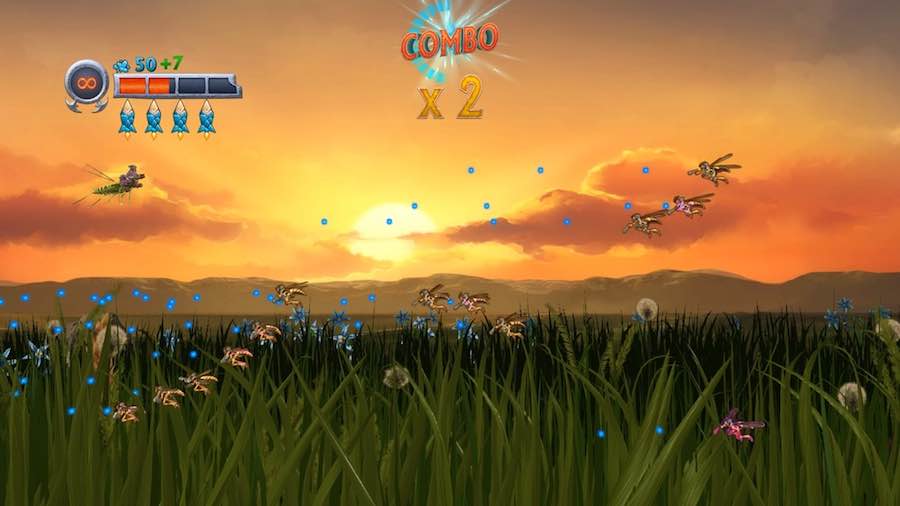 Any guns other than your standard pistols cannot be duplicated, meaning only one machine gun at a time, unfortunately. Nor can weapons be upgraded, despite each one having different stats for power, accuracy and cool-down time and both of these things felt like missed opportunities. In total, there are 12 weapons to choose from and you can carry four, though only use two at a time by dual-wielding. While there are a few snazzy options like the flamethrower, sentry turret or mini-gun, there’s nothing overly bombastic with the standard rocket launcher offering the biggest bang for your buck from the start.

You’ll use these guns, whichever you choose, to mow down your enemies, which may be gun-toting termites who use their large numbers to overcome you or the beetles; well-versed in devastating martial arts. Occasionally, larger enemies will appear and offer some variety such as larger beetles who act as mortar cannons, or cockroaches who’ll soak up quite a bit of damage as they throw their larvae to attack you. Each level tends to follow a similar format of platforming while simultaneously tackling a few enemy types, before a mid-level boss fight and then an end-of-level boss. For the most part, the combat is enjoyable and I found any time where I got frustrated in open play, it was probably my own fault for trying to rush ahead, instead of dealing with the enemies I could see, before moving forward and spawning more.

I took issue with the end-of-level bosses more than once, as my weapons seemed to do hardly any damage to them. One early level ends with a large wall that needs to be destroyed. Simple enough, but as you slowly do your damage, more and more obstacles are put in your way. To begin with, two beetles at the top of the level rain fire down upon you while the wall itself has flamethrowers and mortar cannons and if you allow a leaf which is letting in light, to fall and cover the room over, you’ll be attacked by an omnipotent enemy in the darkness. A later level sees you fighting a mechanically-enhanced spider. Survive long enough and it’ll fall onto its back, exposing a vulnerable underside, but barrages of rockets seemed to do little damage which was very disheartening as it then became a slog of rinse and repeat.

These boss battles stack the odds, not only against you, but massively so. That spider for instance, fires heat seekers and regular shots at you in a fairly unavoidable pattern as well as firing a pod, containing other baddies that spawn until the pod is destroyed and at no point was I offered a health pack (to refill all four health bars) or even respite for my health to regenerate to fill the current bar.

This felt like another misfire. A simple upgrade system for the health bar, like faster regeneration, taking more hits or adding extra bars would have made a big difference as sometimes things can get very intense and boss battle will repeat themselves dozens of times until you finally survive all the way through. It may sound like a minor complaint, but there’s no difficulty option either, so anything you struggle with is literally just restarted over and over again until you get one lucky run. Some areas felt overly complicated, with too many intricate jumps or manoeuvres while under enemy fire to be an enjoyable challenge, though as a whole it remains largely on the right side of fun. 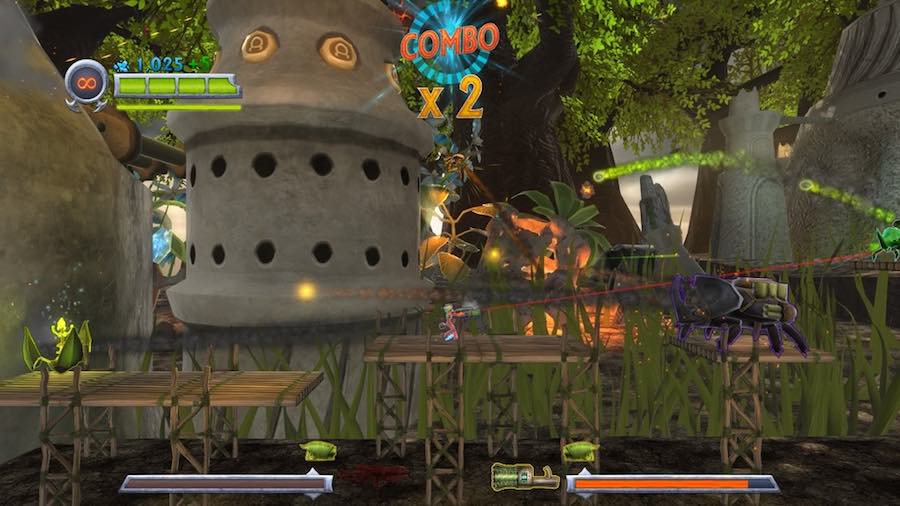 The platforming on offer is solid, offering many classic genre tropes and is vaguely reminiscent of early Rayman titles, though some sections go beyond challenging and into the realms of frustration. One section involved a floating platform that moved slowly from left to right. Between the start and the goal, there were a series of blades that moved up and down. The timing was easy to grasp, but the gaps between the blades was so small (even for an ant) that anything other than perfect timing meant death. This would’ve been more enjoyable if you had a brief period, even a second, after receiving damage before you could be injured again. Instead, if enemies time their shots correctly, they can trap you as each shot stuns you for a fraction of a second, but that pause allows the next bullet to land and the next and so on.

The controls don’t help much as while they’re novel to begin with, when things get more challenging they become less than intuitive, with your brain trying to scramble between firing weapons and switching them and aiming with the right-stick to lock onto an enemy before re-targeting when that enemy dies. If you can master these controls, however, you will feel like a real bad-ass.

These occasional frustrations aside, MilitAnt is an enjoyable game though it may have benefitted from a few additions like the upgrades I mentioned, or even a 3D mode (and it’s not often that I say that) as you are often tasked with defeating enemies who hide at the back of the level, with you in the foreground. Occasional variety in the level types and themes was also appreciated, helping to keep the game feeling fresher for longer. MilitAnt also offers a cross save feature, so you can upload or download your progress from the cloud and continue your big screen progress on the move, if you own a PlayStation Vita.

Overall, MilitAnt is a worthwhile way to spend a few hours, despite the small trophy list, as it offers an unusual take on side-scrolling, shooting and platforming. There are occasional difficulty spikes and some areas do feel a little unfair, but the majority of the gameplay is fast-paced and enjoyable. It may not be as madcap as Organic Panic!, the other “themed” shooter I reviewed recently, but it’s a bit of fun and if you’ve got a spare afternoon or two, MilitAnt is one indie title I’d recommend picking it up.

MilitAnt is available for PS4 and PC. We reviewed the PS4 version.