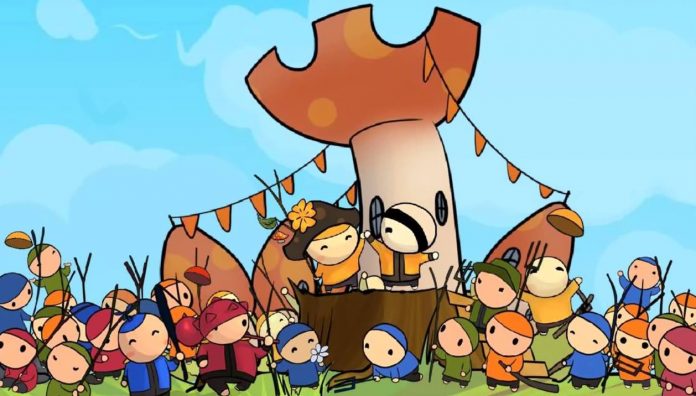 Mushroom Wars has been around for a while. Seven years actually, since its original digital release on the PS3. It took four years to debut on mobile AND a further three to finally make it onto Steam. Was it worth the wait?

Mushroom Wars is not about fungi. Not really. After all, war transcends categorisation. Is it not human nature to attempt to expand one’s grip on their environment? To tangle with forces greater than who we presently are, in the hope that we may reign as masters of our domain in the days to come? Struggling furiously to reach further than our claim, after seeing what exists beyond the picket fence and realising, “you know what? I want some of that”.

But alas, most of us do not possess an army or a Kingdom to defend. No, we are the fodder that would be mowed down in a split second within Musou games. Real time strategy games exist to satisfy that thirst for supremacy. After homework, or on a rare day off, we can step into the shoes of those generals that define human history.

Or, in this case, the fungi that fought and died for what they believe in.

Mushroom Wars is a pint-sized RTS that trims the genre down to its very core. The cute and made for mobile graphics might not entice seasoned players, but the Zillion Whales developed and published game is a surprisingly addictive and fast-paced title that offers more than meets the eye.  There might not be sweeping battles to take in, vast armies to command or a complex infrastructure to build; all you can do is upgrade your buildings, attack enemy forts and rebuild your own into three different types. 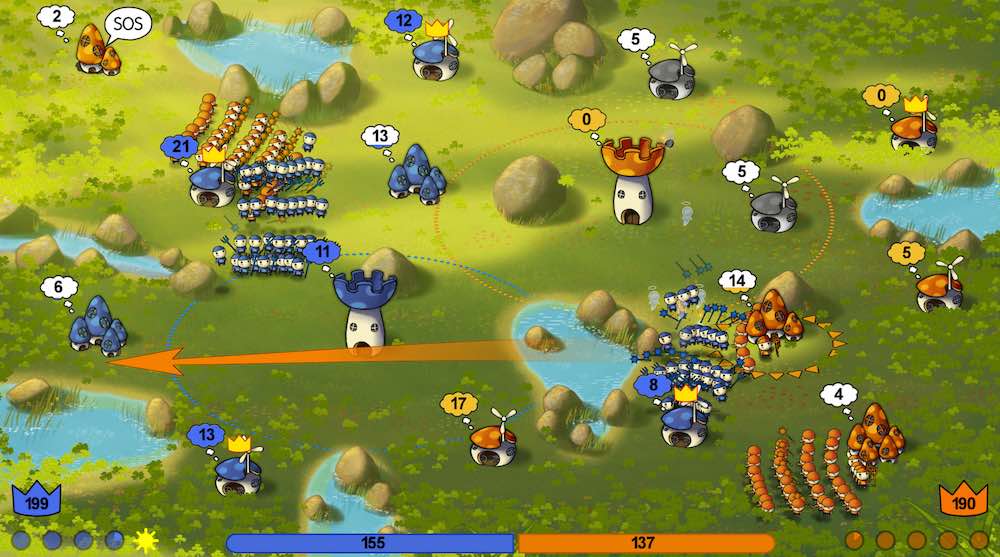 Available buildings include Villages, Towers and Forges. Villages serve as a base of operation to generate troops and supply them to Towers and Forges. They can be upgraded five times, with each upgrade raising the threshold. Vital for victory, Towers are turrets which shoot down enemy troops (or yours) and can be upgrade four times, increasing the shot speed. Forges increase the defence and attack of every building. They can not be upgraded, therefore more would need to be created to further improve stats.

There is also a five-star morale system which is directly influenced by the player’s strategy (favoring defence). Starting at zero, every star gained provides a boost to the attack, defence and speed of your army. As the tide of battle changes, the moral system can drop at an alarming rate and the AI gain benefit from the same stat boosts.

Large-scale RTS games require a lot of memory work and time to gain competency, let alone master. Few genres are quite as daunting for newcomers but after an hour I found myself comfortable enough within Mushroom Wars to attempt multiplayer. It is a game that anyone could plug in and play even if they only have 20 minutes to spare.

On paper, it sounds easy. But battles are not won on paper. Far from it. Any level above “easy” provides more than enough challenge for even the most experienced of RTS players. Battles rarely last longer than five minutes and every single second is crucial. The very aggressive AI will take advantage of any wrong (or delayed) move made, as they aim to overwhelm your own forces. A battle can be lost within 30 seconds.

Mushroom Wars does not present itself as a time-consuming grind. With a 30 mission campaign, skirmish mode (free-battle) and multiplayer, there does not seem to be much here. In place of a full tutorial, the campaign mode teaches all the different elements of the gameplay at a rather slow pace and the first 10 missions can be cleared in under an hour. 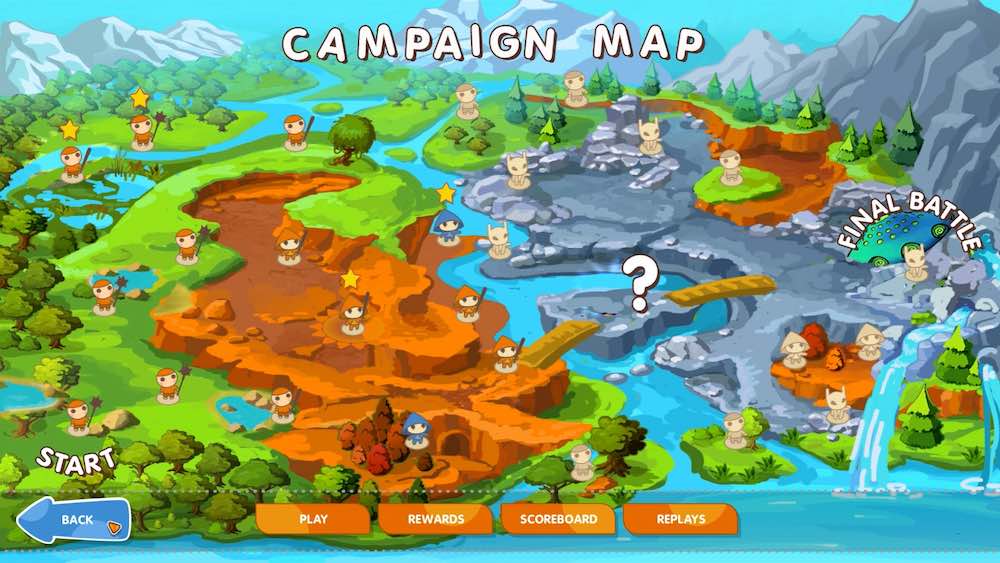 I used the word “present” for a reason, as the training wheels come off around the 15 mission mark; especially when a third army is introduced. I clocked in about eight hours into the campaign with the difficulty on easy. The learning curve takes a while to really master but due to the short burst nature of the missions, I never felt burned out or even frustrated. Instead, a change of strategy was employed to try and overcame the obstacle currently faced by my troops.

Mushroom Wars offers three game types: Conquest, King of the Hill and Domination. Conquest requires all of the enemy buildings be conquered. King of the Hill highlights one or two buildings that must be captured to gain points. Domination removes the point system and just tells you the capture a few marked buildings. Variety is always appreciated, even though all three types do not distinguish themselves enough from each other.

One area that falters is, sadly, multiplayer. Online was delayed for a few months, resulting in servers that are rarely stocked with competitors. Matches can be found but the wait tends to take a lot longer than the actual battle. The soundtrack is pleasant enough at first but gets repetitive very quickly.

However, as a single-player experience, Mushroom Wars offers more than enough to justify its price tag. Fans of the original PSN version searching to re-visit the good old days will find a lot to enjoy here, as will RTS players itching for something a bit simpler but still addictive.

Mushroom Wars is available on PS3, mobile and PC. We reviewed the PC version.