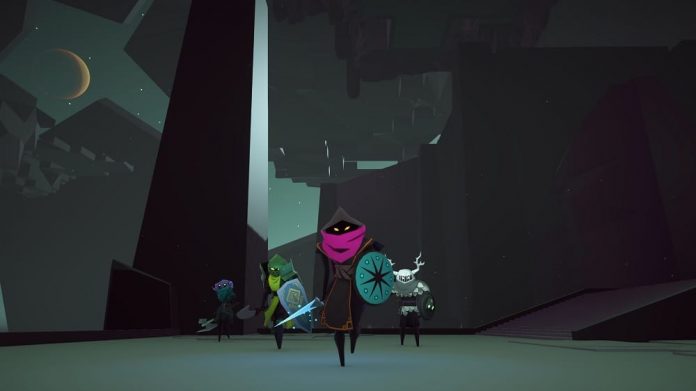 Necropolis has some problems big and small, but parsing through some of the complaints levelled by other reviewers disappointed me.

But I’m getting ahead of myself with the meta-reviewing. Necropolis is a dungeon crawler rogue-like adventure title. You play a silent protagonist with nothing but a gender, origin and crappy sword and shield set, dropped into a procedurally-generated dungeon full of various malevolent creatures. Employed and mocked throughout by some strange pyramid overlord, you’re tasked with acquiring loot and descending ever downwards toward…. an amulet of some sort? The game is quite vague about what it is you’re after but that’s kind of the point; it’s really more about the journey than the destination.

Before any real analysis begins, it should be noted that I tried Dark Souls and hated it but enjoy rogue-like mechanics/games which employ them well. It’s from this perspective I can say I firmly endorse Necropolis as a pretty great game. I understand that while there are some surface-level similarities to Dark Souls (hence the endless comparisons), I think the similarities are pretty limited, so if you’re in the market for a thorough digital self-flagellation, you may be a touch disappointed. This is not to say that there’s nothing of that sort here however. This game isn’t easy by any means, albeit for a non-Dark Souls master like myself. The early levels are not too challenging but the lower levels get pretty punishing, especially if you rushed through without fully gearing yourself. There are a good amount of considerations to keep track of: stamina, weapon types vs. enemies, defense, animations; it’s all a relatively harmonious game of action/reaction, especially when death will erase essentially all your progress.

To that point there’s been some mixed reaction toward the combat system, but I think there’s a lot of merit to be had. The system itself is relatively simple: quick and heavy attacks, charged power moves, jumps, blocks and dodges, but given the wide range of challenges you’ll encounter, it’s more than adequate. It’s not perfect by any means; I found myself lunging past enemies and missing blocks a lot since the collision detection and animations feel a bit off, making for some less than glamorous moments in tense situations. Nothing breaks the experience though and eventually you learn how to minimise these things. For the most part, I found there was more than enough to bite into. Swapping out weapons and shields you find defines your combat style and while this isn’t overly important to begin with, swapping between weapon sets will become pretty crucial later on, as weaknesses in enemy kits become the only way to effectively kill them. The same goes with magic potions, scrolls and bombs you can find/craft as they will all factor heavily into late game success. Tied with this is the loot system, which is simple but varied enough to hold interest. Chests and scampering treasure monsters have a small chance of dropping weird loot which both aesthetically and mechanically changes how you play. I think. 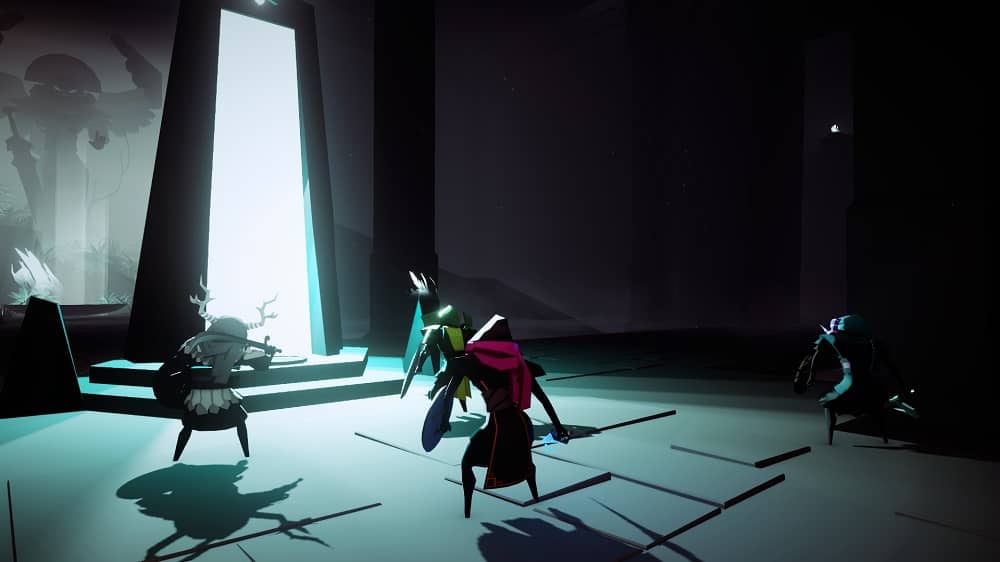 The big lynchpin of whether you’ll like Necropolis or not is the divisive choice by the developers to make the game extremely undescriptive in describing everything. Everything you can use or equip: potions, weapons, passive-granting codexes, armor, scrolls, bombs are all accompanied by a small piece of flavour text which gives you an indefinite indication as to what the item actually does. This has somewhat understandably incensed a good number of players/critics, as your average dungeon crawling, loot gathering urchin needs damage numbers, attack speed modifiers, re-rollable effects etc. to optimise in order to feel comfortable. If you’re interested in that kind of thing, that’s fine, but there’s no need to superimpose a numbers fetish to any game with more than one equippable axe.

You see, at the very core of Necropolis, deeper than mechanical skill or exploration, is organic learning. Learning when it’s best to use that big icy hammer, which enemies to avoid, when to pop that potion. A huge part comes from this lack of concrete understanding; testing things for effect and gaining non-numerical insight into why you died which can inform what you can do next time to avoid the same fate. It also adds to the mystery of the setting; you’re literally dropped into a foreign place with no insight as to what you’re after and why, who you are, where you’re going and how you’ll go about it, all while being mocked by a patronising dungeon master. Having anything more than a tidbit of vague flavour text is a developmental choice that makes sense. It builds lore and encourages players to experiment/share results with each other.

It’s a bit upsetting to see that the community hasn’t embraced such a simple and interesting concept. As mentioned before, players have become accustomed to having things handed to them, and like a unruly toddler, don’t appreciate having the rug pulled out from them a bit. What’s more is that you really don’t need to be Rain Man to notice what effects these things have on play. Weapons have noticeably different animations, lengths, knockdown potential, speeds and damages which one can leverage against the spawns. Using blunt objects like hammers, usually, does more damage to skeletons than small slashing swords. Even if you couldn’t intuit that, a few preliminary tests would certifiably confirm it. Same goes for potions or scrolls, whose flavour texts are not overly obtuse but whose effects, to me, are as clear as day. 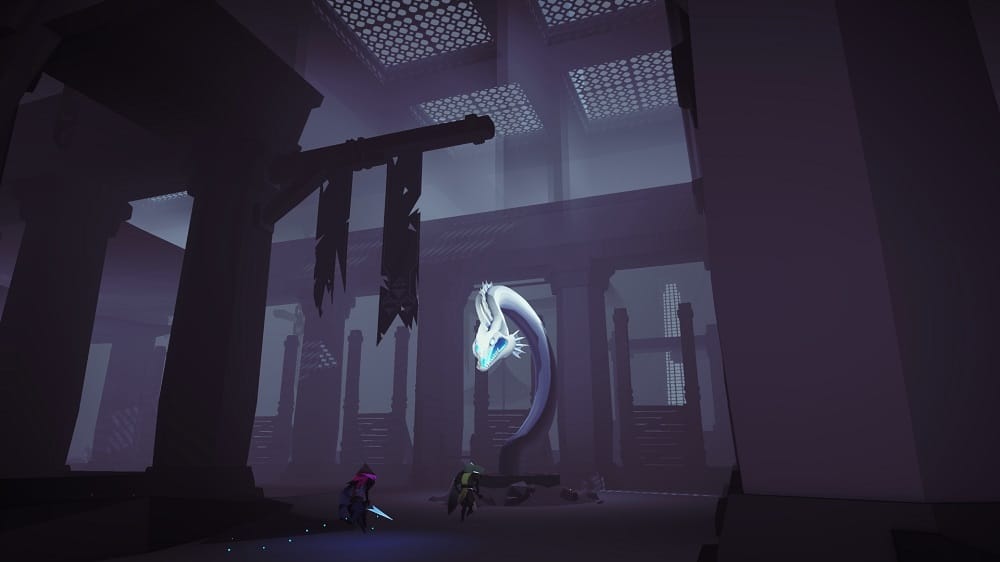 I’ll grant some items take a little more than basic reading comprehension to grasp and not all is explained, but this tidbit is representative of the microscopic level of focus and effort displayed by some reviewers towards a game which needs time and basic observational skills to fully appreciate. I don’t mean to pick on this one in particular (perusing through the reviews will yield similarly confounding analyses) but regardless if you like the non-explicit item names, I have noted an immense amount of rash conclusions of this nature which should be duly ignored/mocked.

It is particularly galling that the developer would consider making sweeping changes to demystify the game in response to unfounded and/or underdeveloped opinions. On one hand it’s understandable. Developers want to make money and appealing to the unwashed masses who are frustrated at the time it takes to figure out why their lizard potion won’t turn them into a lizard is a good way to do so. I get that many people may just not like that which is fine but catering to the kind of person who didn’t really try to learn just doesn’t feel right. Removing the mystery would undermine one of the big themes in the game and negate a big point which helped make me a fan. I sincerely hope that all future additions to the game will be in the form of additional content, not mob requested handholding for those who couldn’t be bothered to devote a few neurons to critical thinking.

This is not to say that all the criticisms leveled at the game are unfounded. Necropolis has a solid core but there are definitely issues in smaller details. The AI is a big complaint and deservedly so. The game isn’t broken because of it, but there’s plenty of sloppy moments in the AI intelligence. Creatures get stuck on scenery quite a lot, which is pretty sad considering how basic and sparse level decor can get. Most baddies also have no means to scale heights so perching upon a waist high rock provides permanent respite which does nothing for the sense of constant danger. Speaking of, there’s no pausing the action at all, so if grandma is seizing up when you’ve toughed it out for three hours to reach floor 8, you’re going to have to run around to find a rock to climb on whilst calling an ambulance. You would think finding a dank corner of a cleared area would suffice, but enemies have an unpleasant habit of showing up from previously desolate areas. This doesn’t needle me quite as much as it does others, but it is a bit annoying that bearded men with knives have literally spawned from the concrete under my feet.

Design-wise, I think there are plenty of hits with only a handful of missteps. I like the level designs and while there are some repetitive fixtures especially early on, further into the game I’ve had a pretty wide variety of experiences between runs. Some levels have been a few minutes from start to end; some put me through an hour plus, multi-tiered ringer and others made me backtrack up levels because they were dead ends. The last two can get a bit frustrating but the procedural generation is pretty decent at making labyrinthine dungeons so I can’t gripe too much. In terms of what’s on these levels, I’m a bit more conflicted. Enemy designs are good, with interesting attack patterns, models and behaviour. They also grow with you, as spiders get progressively bigger and uglier, frogmen sprout fungal appendages etc. so the weaknesses in their kits become more and more crucial to learn and exploit. But while the game has a decent look with its low polygon shenanigans, it’s pretty sparse a lot of the time. There’s plenty of bland pottery and grey walls to ignore and you’re constantly reminded of this throughout. The soundtrack could be better, considering how much time is spent trudging around, and you’d expect that I’d have to wait more than a few hours before whipping out my own playlists. I’ve got another bone with the writing and story. The game’s “wittiness” is fine at times but usually pretty annoying. Also, I get the story is essentially non-existent but that doesn’t mean that there shouldn’t be some world building. Random names and short anecdotes are constantly spewed out at me on walls and by the pyramid overseer but none of it means anything. 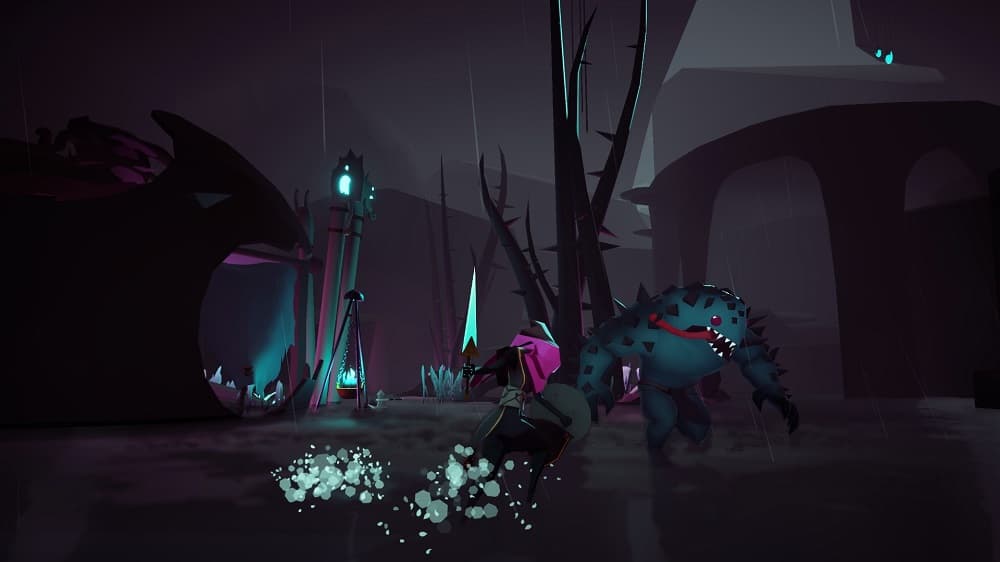 I have a lot of games. Mentally, I’ve organised them into ones I know I’m not going to play after the post-buy enthusiasm has wore off, ones that I might if I’m desperate/in certain moods and ones that I will play now and in the future. Necropolis is firmly in the last category and that surprises me as much as anyone else when I started. I’ve yet to start multiplayer campaign but any game that has me harassing casual acquaintances to buy it and play with me speaks to the quality. It’s a really solid game which will only benefit from improvements in AI, aesthetic polish and more ambiguous loot. Necropolis rewards those who put the effort into decoding the weirdness, and while some may not appreciate that, for those who do, it’s a game worth investing in.

Necropolis is available on PC.