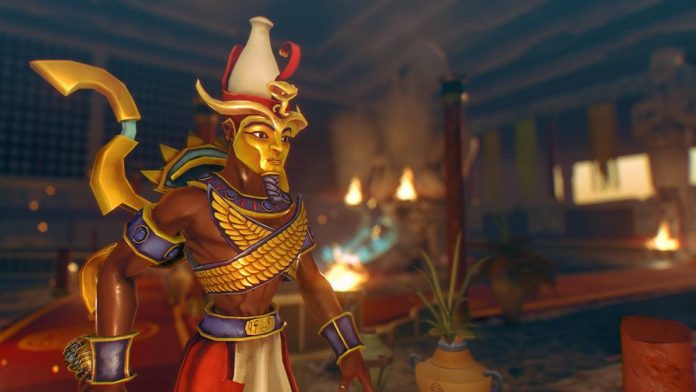 Following the reign of the Dark Souls series, it seems as if many action RPGs these days try to follow in its footsteps; hacking and slashing make way for precise swings of a blade.

Saving your game wherever has returned to the days of checkpoints widely spaced out around a map. Perhaps, most notably, is the urge to make every encounter a genuine challenge and the difficulty curve more substantial. Pharaonic, developed by Milkstone Studios, is one such game. Set in Ancient Egypt, Pharaonic is a sidescrolling action RPG with precise combat, tough enemies and a wonderful Egyptian setting.

Combat is the primary focus of Pharaonic, and it provides a variety of ways in which you can act. The top left of the screen displays your health, stamina and magic bars, and attacking and defending rely on the shoulder buttons. Aside from dodge rolls, the player has the option to perform a light attack, a heavy attack, a block and a parry. The first three of those options are pretty straightforward; perform a parry at the correct time and you block your opponents’ attack and temporarily stun them. The player heals by praying at a checkpoint shrine or by drinking from a refillable canteen. Similar to Dark Souls’ Estus Flasks, the canteen has a limited capacity and can only be drank from a few times before running out of water. Combat isn’t anything we have not seen already with similar games, but it feels smooth and responsive.

You acquire equipment from enemy loot, treasure chests and from merchants. Two weight categories define most equipment: light and heavy. Light equipment is less protective but weighs less, whereas heavy equipment offers protection at the cost of speed. Different weapons also change the way that your character strikes enemies. Equip a short sword to inflict quick strikes to an enemy in front, or equip a spear to try and damage multiple enemies at once. Light and heavy weapons feel fairly balanced and are both useful in their own respect. I found myself switching weapons based on each situation, and I found that to be a particularly useful strategy. That being said, how you decide to play is completely up to you, and any combination of equipment is a viable option. There are also rings and backpacks, the latter of which provides a magic spell to utilize during battle. 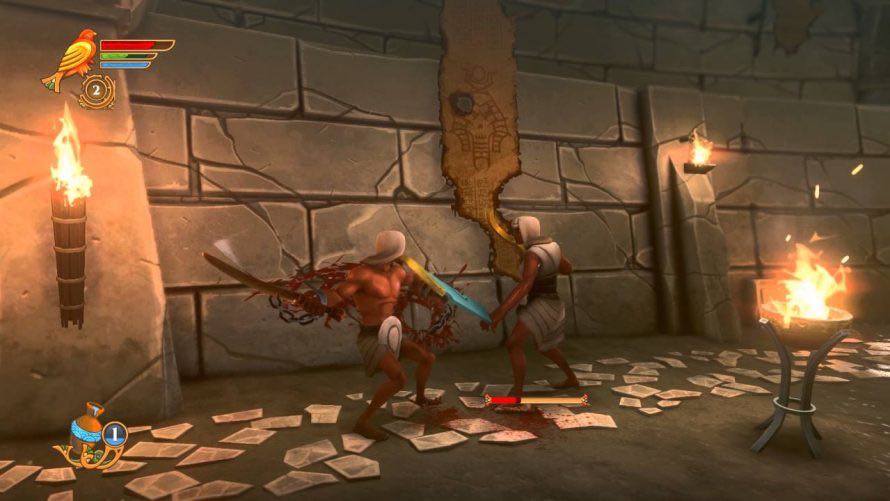 Defeat enough enemies and you will level up, increasing your maximum health and stamina. Unlike many RPGs, levelling up does not provide skill points. Skills improve by exchanging Shabti Gems with specific trainer NPCs. Shabti Gems are found in chests and also acquired by completing side quests. These side quests are normally simple fetch quests and require minimal extra effort. Your skills represent different types of equipment – light weapon, heavy armour, backpacks, and so on. Equipment lower than your corresponding skill level gives you an extra weight reduction; higher level equipment gives a weight penalty. It’s an interesting system, but I found it taxing to incorporate an extra upgrade system when it is already difficult to level up. Without gems, you are unable to properly use stronger equipment. This makes doing side quests feel more mandatory. At the same time, many players may have no problem with this at all.

Pharaonic’s story is unfortunately underdeveloped, though it is hardly the focus of the game. The all-powerful ruler in Egypt, known as The Red Pharaoh, utilized a powerful relic to resurrect many times over more than a hundred years. In the year 440, sea peoples invaded Egypt and the Red Pharaoh went into hiding. You are a prisoner, locked away in a jail cell until a mysterious woman frees you. After fleeing the prison, you begin your journey to discover what happened to the Red Pharaoh. Excluding plot-relevant discussion from NPCs, story elements are few and far between. After fighting my way through hordes of enemies and the inevitable boss for each area, I found Egypt’s storyline struggles largely forgettable.

What I genuinely cared about, though, was the superb art direction and wonderful environmental design. Character designs are purposefully chunky in a way that is charming and unique. The panning camera highlights each location as a beautiful vista through superb background detail. Not only that, but the camera and subtle lighting provide enough allusion to environmental traps that will undoubtedly catch you off guard one time or another. For the record, they are absolutely vicious.

Inside those environments, however, the diversity of enemies is disappointing. Even when entering a new area, you’ll encounter enemies reminiscent to those in the area prior; larger enemies with two-handed weapons, those donning a shield and sword, those with a long-range polearm, and so on. Though some enemies may present unique attacks to catch you off guard, determining the type of enemy from its weapon assignment reveals most of its moveset. Even in terms of bosses, they often replicate the enemies that came before them. A new move or two may present itself, but not enough to make bosses feel truly memorable. 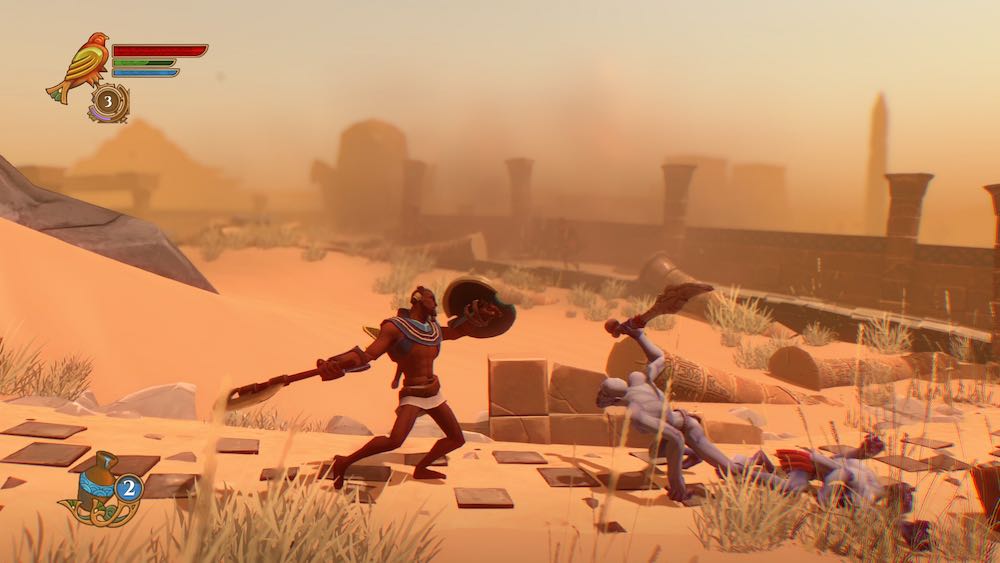 After treading over the same pathways more than half a dozen times, I hit a serious mental snag: I grew tired of backtracking. If you die, you return to the shrine at which you prayed most recently. This often sends you back behind a long line of encounters, and these encounters are nearly identical each time. Enemies may spawn on the left of the player instead of the right, but that is the only difference that may occur. Fight a little too sloppy and you may feel compelled to return to the shrine to heal. In true Dark Souls fashion, this respawns all enemies you previously defeated. In a 3D game you have more freedom to avoid encounters, but Pharaonic’s sidescrolling prevents you from bypassing many encounters. Checkpoint shrines are also often located before a big slew of encounters, leading to a boss fight. Wasting your canteen on mindless enemies before the boss is at times frustrating. It almost shows a lack of confidence in the boss’s ability to adequately challenge the player. It would have been nice to see checkpoints in locations that reward the player better for their triumphs.

Despite its flaws, I had a lot of fun with Pharaonic. The beautiful world and reaction-based combat are genuinely enjoyable. However, the lack of enemy diversity, the tedious backtracking and the questionable checkpoint locations seem like design missteps. Ultimately, the right person might find these negatives as insignificant. To those who fall in this category, then Pharaonic might just scratch a particular itch for you. For under $20, it’s a worthwhile romp through the desert.

Pharaonic is available on PC, PS4 and Xbox One. We reviewed the PS4 version.