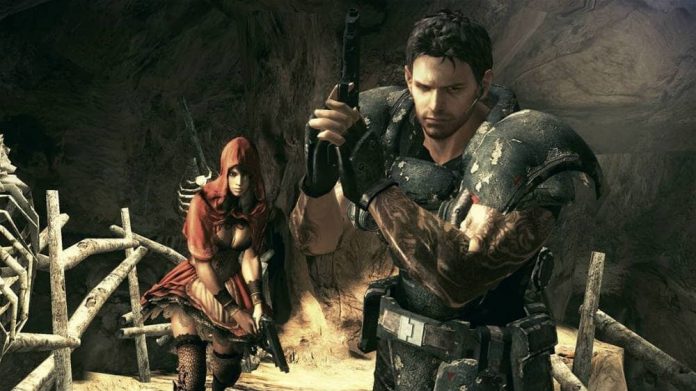 Heavily geared towards co-op gameplay, Resident Evil 5 was perhaps the mainline title that took the action elements a little too far for many stalwart Resident Evil fans.

True, it shared many control elements with its highly praised predecessor, Resident Evil 4, but whilst that title was still dark and foreboding, Resident Evil 5 had a lighter tone with often sunny locales, and it was bereft of any real horror. To its credit though, if you put your thoughts on what a Resident Evil game should be to one side, it was a bloody good action game.

As part of Capcom’s push to seemingly have nearly all the numbered Resident Evil releases available on current gen consoles, PS4 and Xbox One owners can now discover the joys of Resident Evil 5 for themselves, and even those that have played the title in the past may still be enticed by what’s on offer. Aside from graphics comparable to the PC port – which are still reasonably nice considering its now nearly seven years old – the camera has been adjusted to give for more environmental awareness. Additionally, all the DLC has been bundled in, including the two rather fantastic story episodes, and a new No Mercy mode has been added to its The Mercenaries side attraction too. I think you’ll agree that for the humble sum of £15.99 it’s a glorious proposition.

The actual game itself remains unchanged, but that’s not such a bad thing. Taking control of the laughably bulked up Chris Redfield, or maybe even the latest Resident Evil femme fatale Sheva Alomar if you’re playing in co-op, it’s an enjoyable romp through six chapters of set piece after set piece in which there’s plenty of monster slaying to be done. As per the norm for a Resident Evil game, the controls are very clunky, meaning that great consideration has to be given to your surroundings when gearing up for attack, and ammo can easily become scarce if you’re not mindful of your resources. It all makes for a game that is often tense, with the need to think fast and keep on your toes if you want to avoid being swarmed and mauled by groups of enemies. It’s also got some notably great boss battles that truly get the adrenaline flowing. 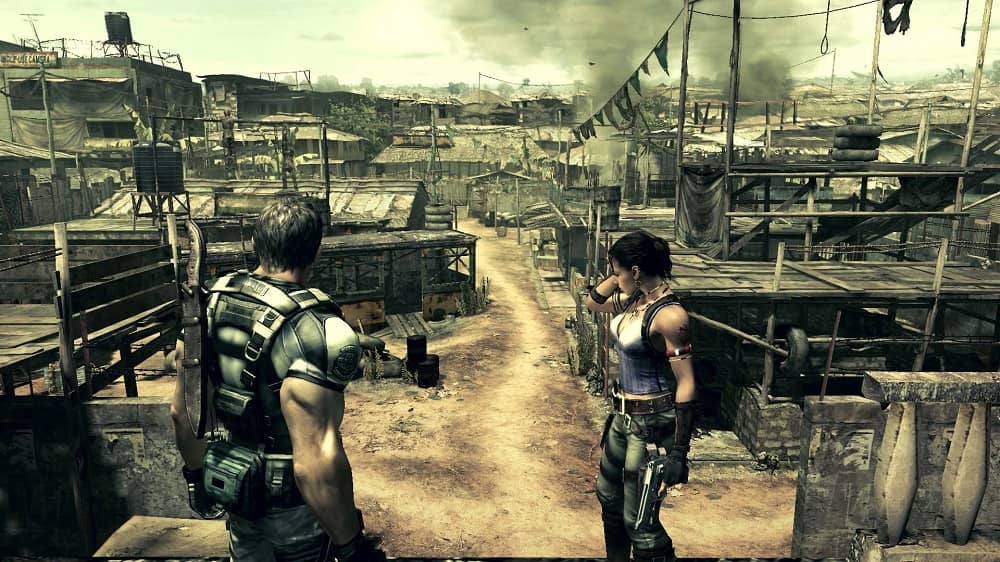 Whilst some fans will bemoan that it fails to maintain a silky smooth 60fps framerate, in reality, there are a few more pressing issues that bring the experience down a peg or two. Firstly, there’s quite a reliance on quick time events to make many of the cutscenes “interactive”. It’s not a bad concept in itself, as it does force you to stay alert and makes matters more interesting, but if you fail, you have to start the scene from the very beginning which can be a chore. Also, when playing the game alone, the A.I. of your partner has to be called into question as it can quite often be what I can only describe as braindead. Your computer controlled buddy will stumble around, getting themselves into bad situations and making your job twice as hard in the process, and this is despite the A.I. supposedly being improved for this re-release. Perhaps Resident Evil 5’s biggest downfall however, is that it’s pretty much a one trick pony. Unlike prior Resident Evil games, the presence of puzzles to provide a bit of gameplay variety and get the mind working a little are nearly all but absent, leaving you to just proceed ever onwards, shooting and running until you reach the inevitable end.

What can be considered as the end of the fun you can have with Resident Evil 5 though is purely up to you as the player. As an action game, it demonstrates a heightened level of replayability over previous entries in the series, bolstered greatly by the ability to upgrade your weapons and unlock numerous extras such as hilarious outfits and unlimited ammo. You’ll actually want to play through the game again on a higher difficulty level, and all players will stand a chance of completing them too once they’ve maxed out their favourite weapons and found a competent co-op partner. And once you have done with the campaign and both of its expansions, which must be said, perhaps offer even better experiences than the main game, dedicated players could enjoy playing The Mercenaries for years.

An arcade experience through and through, The Mercenaries, or rather, The Mercenaries United as it’s called here due to the inclusion of all the DLC characters, is a fast-paced game mode where your sole aim is to defeat as many enemies as you can against the clock in a range of environments. Of course, you amass a score for your handiwork so that you can measure your prowess against others, so the onus is always there to outperform yourself and kill yet more monstrosities in greater combos to prove you’re the best on the leaderboards. Playable both on your own and with a buddy in co-op, it’s great that The Mercenaries is now unlocked from the outset rather than you having to complete the main game first, as it provides boundless amounts of immediate and frantic fun that can keep you well-entertained in the long run. New to this re-release however, No Mercy mode ups the enemy count to make the challenge greater than ever, although unfortunately it’s single player only. 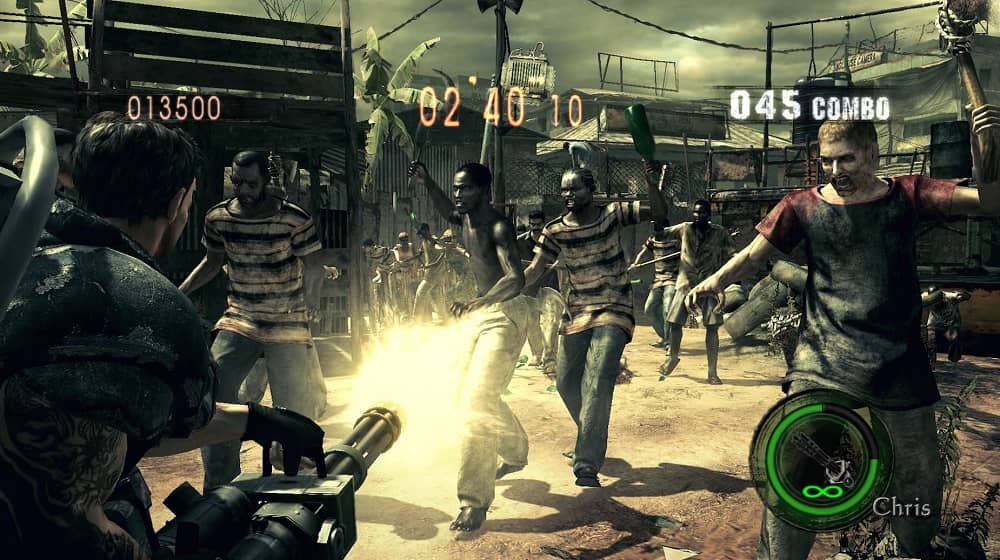 Those that like more direct competition are also catered for by Resident Evil 5, courtesy of its quite enjoyable Versus mode. Two match types are on offer, Slayer and Survivor, with the former being a test of who can achieve the most points by killing monsters within the time limit, and the latter essentially being a deathmatch with the added danger of monsters swarming the map. Available for you to take on competitors either one on one or as a team of two, Versus mode is surprisingly good fun that still feels like a unique online game experience today.

Supporting both split screen and online co-op across its various modes, there’s no doubt that Resident Evil 5 is best enjoyed with a friend in tow, especially when playing the main campaign just to avoid the pitiful partner A.I. Even when played alone though, it remains an exhilarating experience, albeit one with a tad more frustration. It may be lacking any real horror, but Resident Evil 5 boasts solid gameplay, a huge amount of quality content and commendable production values, making it one of the better releases in the long-running series. In a nutshell then, whether you’ve previously played the game or not, Resident Evil 5 on the Xbox One is a bargain that shouldn’t be ignored.

Resident Evil 5 is now available on Xbox One and PS4. We reviewed the Xbox One version.