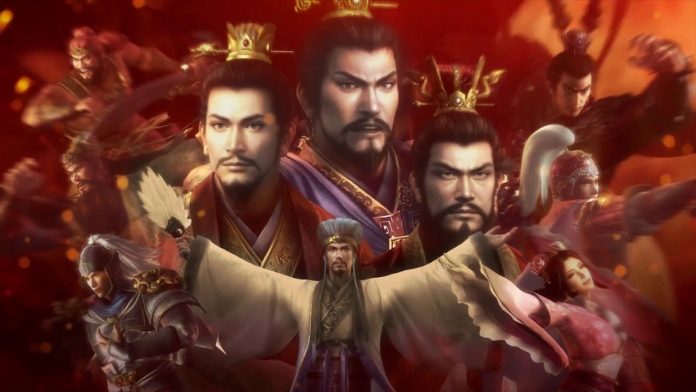 Focusing on the marketability of the Dynasty Warrior franchise and all of its spin-offs, Koei have somewhat neglected their longest running franchise in recent years. With Romance of the Three Kingdoms XI debuting in the Western market in 2007, it’s been nearly a decade since North America or Europe gamers could attempt to take over China.

Inspired by Luo Guanzhong’s historical novels of the same name, the series takes place during the Three Kingdoms period in China. Bringing together hundreds of characters from that era, the novels mainly romanticise and dramatise the three-way struggle between the states of Wei, Shu and Wu. Led by fascinating and complex figures like Dong Zhuo, Cao Cao and Yuan Shao, this crucial time in Chinese history lasted from 220 – 280 AD.

Romance of the Three Kingdoms XIII  contains two modes: Hero and Main. Hero allows gamers to play through critical moments from that era. Mighty (and bloody) shoes can be stepped into, be it Cao Cao, Liu Bei, Sun Quan or Zhang Xiu. Although not particularly detailed, a decent overview of the major battles and events that transpired over that period is provided.

Like the previous entries, XIII‘s main selling point is the possibility to create your own history. Selecting from an overwhelming parade of officers, or creating your own unique character, a new campaign covering the entire period can be experienced with the final goal being to unite all of China. Choosing whether to be historically accurate or completely fiction, the player has the freedom to develop the way they want.

Prefer to stick to the front lines and remain an officer? You can. Determined to fight (using weapons or words) your way to the top of the mountain and reign as emperor? Go for it. 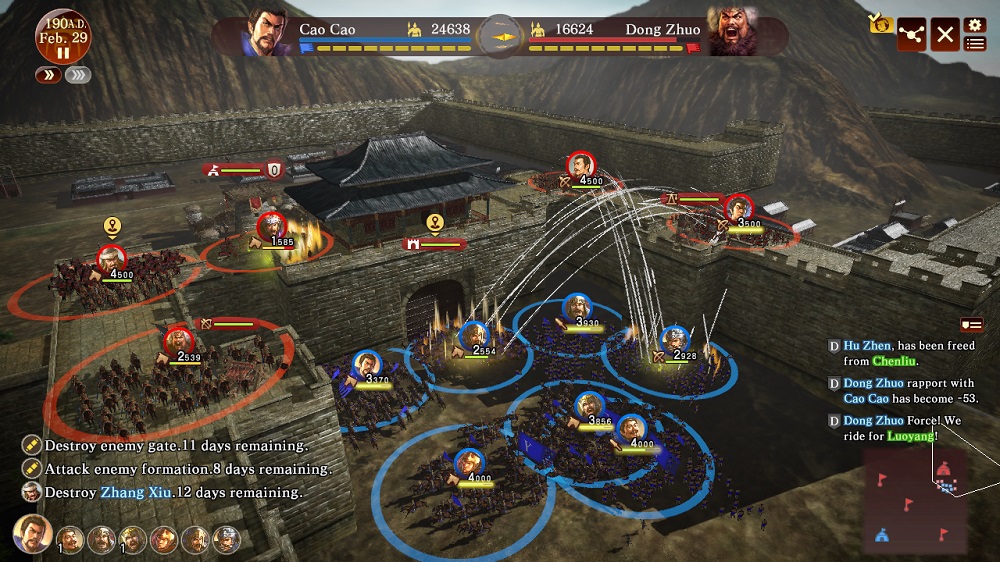 Although correctly considered a strategy series, Romance of the Three Kingdoms also tends to focus on character development and offering a robust RPG experience. User control is important. Throughout its 30-year history, Koei has flip-flopped back and forth between the genres, prioritising one over the other. This has resulted in a rare series that managed to deliver fantastic RPGs (VIII) and strategy (XI) games.

The problem is that the worth of those highly populated genres is directly linked to the gameplay’s depth and complexity. Romance of the Three Kingdoms XIII tries to be both a great RPG and strategy title, resulting in a lot of content but coming off as rather simplistic for both genres.

Hero mode teaches the mechanics, quite well actually, which are later properly used in Main mode. Most of the game time is spent developing the resources of the cities under your command (or those you serve), networking with other officers and the art of war.

The RPG focus means that your character has to be present at the battle for the player to take control. While still an officer, you’ll receive assignments to either attempt to take over cities or try to influence free officers to join the cause. Military options are quite limited at this stage, so time is assigned to visiting officers to try and develop some rapport. Officers can also mentor your character to develop their four stats (leadership, war, intelligence and government).

Networking plays a huge part in Romance of the Three Kingdoms XIII but is quite dumbed down. Pretty much everyone in the game is susceptible to some form of gift and rapport rarely decreases with friendly officers. Every so often, the bond with an officer must be levelled up but that can be achieved by natural means (gifts, mentorships or favours).

As you gain rank (through successful missions), options open up. Initially, proposals can be done to upgrade the city or train the army. These proposals need to be approved by higher ranking officers (and they nearly always do). Once you reach a standing like War Minister (or Governor), you become the person reviewing proposals and giving orders to lower ranking Generals. At this point, the freedom to attack other cities is provided.

Even though the above description indicates variety, there really is not that much to be found. If anything, the lack of an automatic reply to proposals means that too much time is spent accepting a General’s suggestion to man the farms. This becomes a huge annoyance once dozens of Generals are under your command. 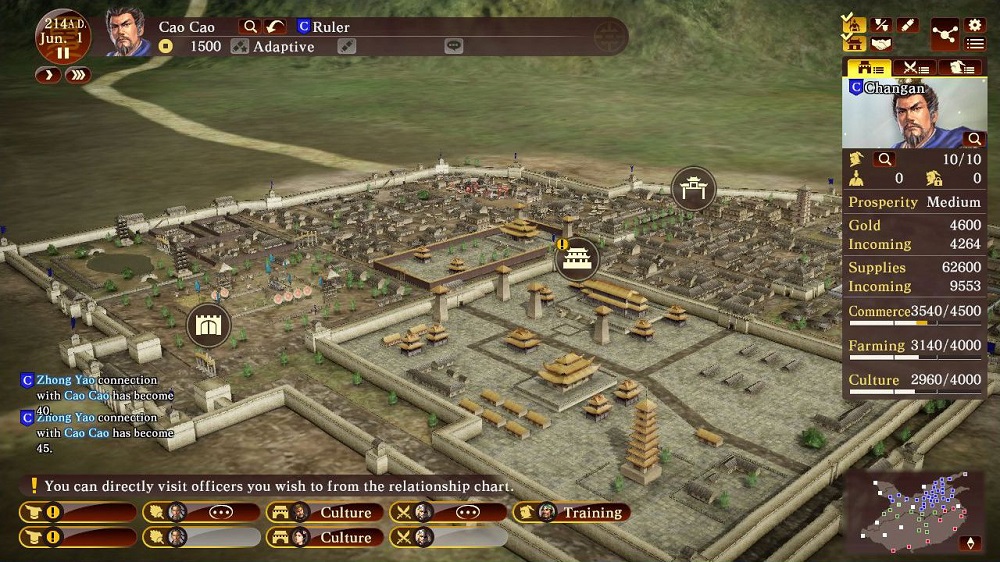 The power of three is strong with XIII: three types of troops to train (Bow, Horse and Spear), three city areas to develop (Farming, Culture and Commerce) and three leaders to assign to every battle formation. Repetition can set in quite quickly, although things improve slightly once your city is developed, with a four choice technology system that boosts performance. Still, it does take a fair amount of time to reach that point. More than once, my character would have been assigned to an entirely new impoverished city by the time I can reap the benefits of my labour.

War is why most of us are here though. How does the combat fare then? Well, it is a mixed bag. Using full 3D models and a real-time system, Romance of the Three Kingdoms XIII’s combat boils down to a numbers game more than strategy. Depending on the rank, the player will have control of some of the units and they will attempt to siege a castle (or rarely defend). Besides the main camp, each army has a few different camps which can be destroyed, limiting the different strategies the opposition can use.

Each unit is assigned a type (bow, horse or spear) and a few stats to determine their capabilities in battle (attack, defence and etc.). If all of the enemy camps or units are destroyed, the battle is won. Naval battles are the exception since neither side has any camps. Although Romance of the Three Kingdoms focuses on the underused City Siege, the removals of traps or ambushes found in previous entries is disappointing and sorely missed. Items (battering ram…) can be equipped to aid in taking over the City but are hardly required.

The fast paced nature of the combat makes it exciting but victory is TOO easy to achieve. Often all it takes is knowing when to use a buff and that a unit of 10,000 will probably beat 7,000. The gullible AI does not help much either. A small sacrificial unit can be sent to meet the opposing army half way, leaving a much bigger troop to attack the city unopposed. They fall for it nearly every single time.

Politically, the AI fares much better. In one situation, I had formed a coalition with an opposing state to try and take down a third, more powerful, army. As I used up my troops to defeat the latter, the former barely helped and developed their own troops. Once the coalition ended, I found myself faced with a former ally stocked to the brim with warriors ready to put me to the sword.

Once in awhile, a duel or debate can be triggered based on a rock/paper/scissors system. Taking place over five rounds, the player choices out of five options and hopes for the best. Despite a lack of challenge or depth to it, these little breaks from micro-management are enjoyable and welcomed. 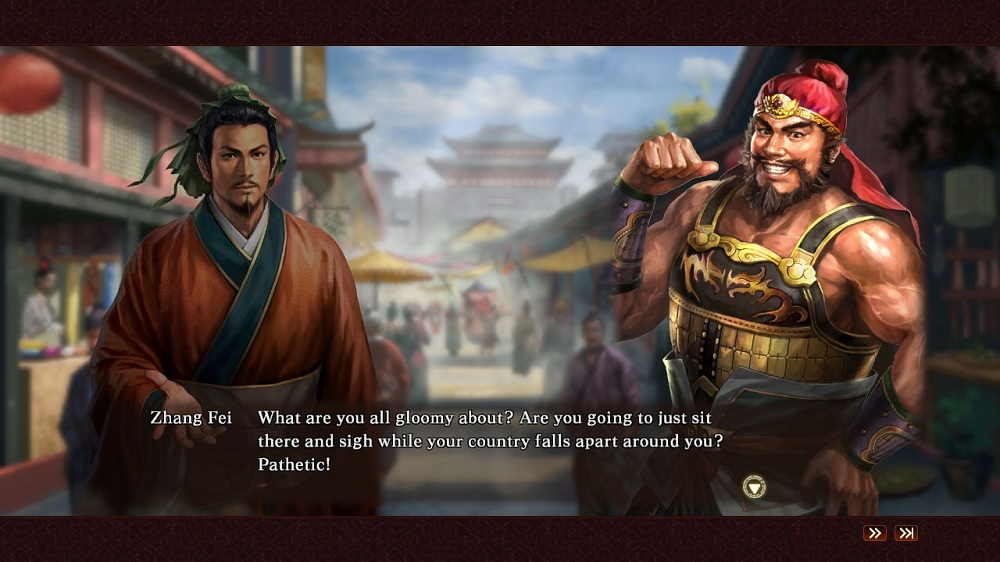 Visually, Romance of the Three Kingdoms XIII is only okay. There is not a lot of detail in anything – but nothing is really an eyesore either. It seems to be designed to run on weaker PC graphic cards, which makes the frequent lag during battles in the PS4 version very disappointing. (It should be noted that this review is on the latter, so lag might be present on the PC release as well.)

Although this review possesses a rather negative tone, I did enjoy my time with Romance of the Three Kingdoms XIII. It is a surprisingly easy game to pick up and play, and I rarely found myself bored during the 25 hours of game time. Saying that, XIII fails to be the best at anything it attempts to do.

At the end, this entry is best for those that are fascinated by the Three Kingdoms era. Fans of the series might find some entertainment depending on their level of expectation going in.

Romance of the Three Kingdoms XIII is available on PC and PS4. We reviewed the PS4 version.