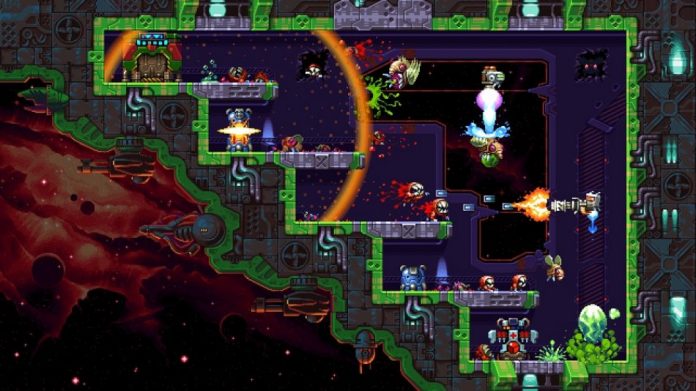 Picture the scene: the Earth is doomed.

Three fleets of ships manage to escape, carrying what’s left of the human race in cryostasis. Hot on their heels, a horde of not only aliens, but super mutant aliens, mount assault after assault, eager to bring the pursuit quickly to an end. Humanity’s last hope? A bunch of cute-looking security droids that will do their very best to protect the fleets as they travel through three galaxies. It sure won’t be easy, but with unyielding determination – and also possibly a friend by their side – maybe, just maybe, mankind will be saved. This is the scenario that Super Mutant Alien Assault, an arcade platformer shooter by indie developer Cybernate, drops you into. Your feet, and also those of a buddy’s if you’re lucky enough, filling the shoes of the humble security droids.

Despite being handed with the grave task of defending the last of humanity, Super Mutant Alien Assault is quite a simple and light-hearted game.  It’s also got the potential to be frustratingly challenging. Starting out with absolutely nothing – no weapons, no skills, and not even a perk to your name – the beginning of your heroic efforts are rather rough for your selected droid. You’ll more than likely die, die and then die again, massacred by a varied bunch of grotesque aliens eager to put an end to your life. But, as you keep playing, trying time after time to inch just a little further, you’ll unlock a whole host of sidearms, abilities and perks, all making your task just that bit more manageable. Even then, though, aside from the one piece of equipment you get to choose to take into battle with you, everything else, including serious weaponry and explosives, must be picked up as you play; their randomised nature requiring you to keep on your toes and become acclimatised with all the possible tools at your disposal so that you can make effective use of what you are provided with.

It’s this randomness, a feature which is also carried over into Super Mutant Alien Assault’s level design, which makes it such an addictive experience, although it could also be considered its sore point. With each of the three galaxies having four single screen levels for you to complete in one sitting, sometimes, it feels like success isn’t so much a matter of skill, but rather luck. You battle with enemies, completing objectives such as transferring fuel cells between one point and another, preventing pressurised containers from exploding, or even just simply surviving, and yet the only real challenge is often the suffocating design of the levels themselves. 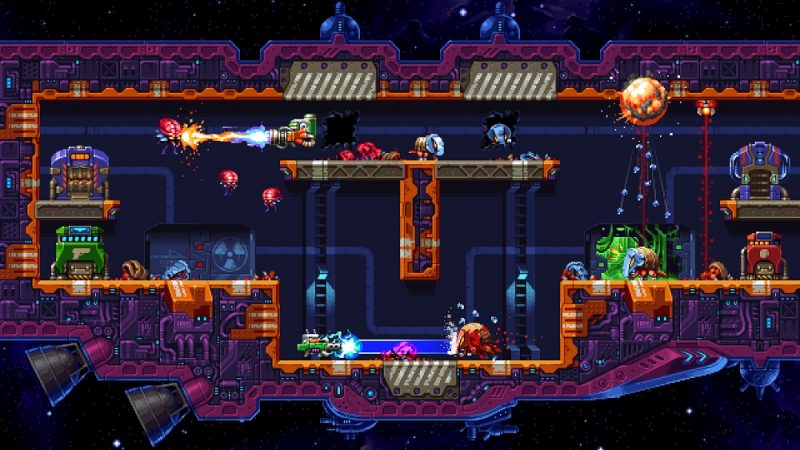 It’s not unusual to find yourself in a tight spot where you can’t really avoid your enemies or their attacks because there’s just not enough room to manoeuvre; a problem exasperated by the random nature of weapon and skill pickups which often leave you ill equipped for your current predicament. Being handed a grenade launcher by a weapon vendor, for instance, is often a very dangerous affair. The cramped, single screen levels mean that all too often the grenades are likely to come back at you, resulting in you either playing it dangerously or waiting for a new, and hopefully more useful, weapon to respawn. It could also be said, that perhaps the enemies are a little too resilient to your attacks. With both your security droid and enemies moving at a brisk pace, it’s rather jarring that you have to put a considerable number of bullets into even the smallest of foes to put an end to their rampage. It unduly slows the speed at which the game progresses, and it doesn’t always feel fair when your security droid is pretty fragile and there’s little chance refill any lost health.

Despite its issues though, Super Mutant Alien Assault remains an enjoyable experience, and those with a great deal of patience or ninja-like skills may not even care too much about its shortcomings. The game also shines when played in co-op, which unfortunately is local only. Having a buddy by your side undoubtedly makes everything a little easier, if not a little hectic, but it’s also a hell of a lot more fun too. And should you manage to beat all of the game’s 12 levels, you can do them all over again on two more unlockable difficulties, or even try out endless mode that knocks your health down from the standard five hearts to just two. Truly a challenge that will test even the most seasoned of gamers.

Like its charming pixelated graphics that ooze character and its annoyingly mesmerising dubstep soundtrack, Super Mutant Alien Assault is an acquired taste. For many players it may be a bit sour, leaving them with the contorted face of bitterness and displeasure. Those looking for a simple but serious challenge, however, may find it to be rather tasty and fulfilling. There may not be much to it, and the randomness can certainly cause some frustration at times, but Super Mutant Alien Assault has a lot to offer in terms of pure, unadulterated arcade action. And with a wealth of weapons and extras to unlock, as well as a solid local co-op option, it’s a game that you could find yourself playing for a quite a while if you end up getting pulled into its addictive gameplay cycle with a like-minded friend.

Super Mutant Alien Assault is available on PC, PS4 and Xbox One. We reviewed the Xbox One version.