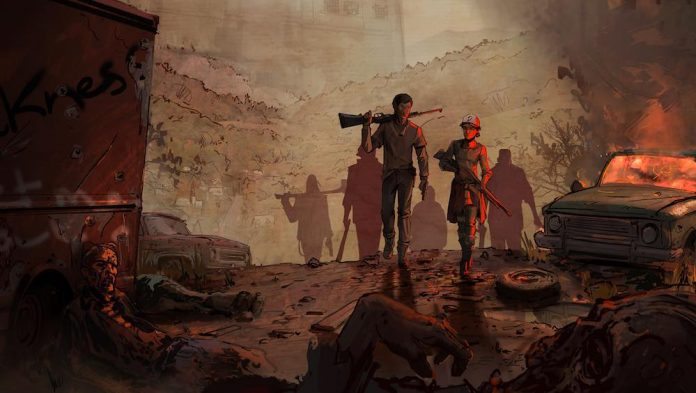 In celebration of the San Diego Comic Con this week Telltale joined Skybound Entertainment on stage to discuss the highly anticipated new season of The Walking Dead.

Telltale revealed a few new screenshots at SDCC along with a brand new poster which is said to be an homage to the season one poster. The only difference of course is that in this new poster Clementine is walking with her head held high with her fellow survivor Javier, who was revealed as the other playable character in season three, rather than hidden behind Lee like in season one’s poster. A little later this summer Telltale is said to be releasing a print of this poster and will reveal how you can get your hands on it soon.

The Walking Dead‘s Creative Director Dennis Lenart from Telltale was joined by Melissa Hutchison (voice of Clementine) so that they could give a few more, yet to be heard, details about this new season. Without spoiling anything, of course. In the first screenshot revealed you can see Javier and Clementine in what is said to be a walker-infested “slaughterhouse.” The second screenshot shows Clementine with baby AJ who fans will recognise as Rebecca’s son from the second season. A few years have passed since the end of the second season so both Clementine and AJ have grown up a lot. The final screenshot shows Javier shining a flashlight on a fellow survivor, the details of this screenshot have yet to be given.

Lenart and Hutchison discussed with SDCC  goers that an important new aspect of the third season is that of course choices made in the first two seasons will carry over into the third but this new season is a chance for players who haven’t played the first two season a new entry point. New players will have a chance to learn about Clementine’s backstory while players familiar with the characters will get to see how their decisions in the second season will pan out here.

The final big point that Lenart made is the importance of playing as this new character Javier. With Javier the Telltale team was able to create a character that would be a lot like the brand new players coming into The Walking Dead Season 3 with no prior info on Clementine. Javier doesn’t know everything about Clementine that players of the first two season do and this gives new players a chance to learn about her through him.

Hopefully a release date will be revealed soon but until then, stay tuned for any more news that comes our way!