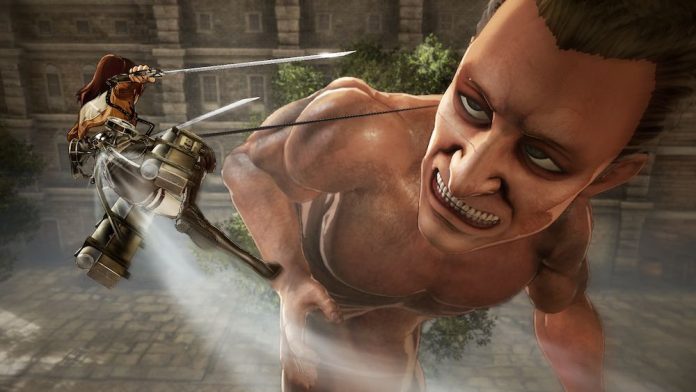 Wings of Freedom makes zipping around with ODM gear fun. As someone who has seen the anime though, it doesn’t bring anything new other than going ahead of the anime in the epilogue – and for people who haven’t seen the anime I recommend you watch that first.

From developer Koei Tecmo comes A.O.T. Wings of Freedom, a third person semi-RPG action game that allows you to zip around and kill Titans both in and outside three 50-metre high walls. In this world there are three branches of the military: the Garrison Regiment, the Miltary Police, and the Survey Corps. These regiments defend humanity’s last remaining population who now reside within the three walls. Humanity has been at peace from Titans – giant humanoid figures about 3-15 meters tall –  for over 100 years, but that all changes on one day. You start with the tutorial before flashing back to where it all started for the characters you’ll be following.

Across Wings of Freedom you can play as a variety of characters, but for the story it’s the main four – Eren, Mikasa, Armin, and Levi. The story in the game follows the beats of the anime, but a fair bit of backstory and character development is cut out. At times you’ll actually play a few levels that do happen in Attack on Titan but only off-screen. Rather unfortunately for me, the epilogue in Wings of Freedom definitely spoils some of season two of Attack on Titan. I didn’t read too much into where this spoiler is in terms of the anime because doing so, and even skim reading, led me to encounter other spoilers I’d rather not read. For definite though, if you’re going to play Wings of Freedom but don’t want any spoilers for the anime, close your eyes at the end of the credits, and then completely avoid the epilogue quest afterwards.

What makes the spoiler an even bigger problem is how Attack on Titan does such a better job of conveying its stories and giving the audience time with its characters. Wings of Freedom’s version of the story leaves so much out that there isn’t much emotional heft to the game. Everything with Eren’s Dad is cut out, and the gruesome flashback between Eren and Mikasa is cut out making the relationship between the two less important in the game. The Titans are never as terrifying in Wings of Freedom as they are in Attack on Titan as it isn’t long before you can kill three in the space of three seconds. There are moments in Wings of Freedom that were more powerful or emotive in Attack on Titan, so I feel this is the main reason you should watch the anime first. With regards to the the spoiler, I’m annoyed I’ve had a less emotionally invested version of something that would be a big surprise to me had I seen it in the anime first. Wings of Freedom does impressively echo the anime however, all done via in-engine cutscenes but very true to Attack on Titan’s look; adding to that is the voice acting in Wings of Freedom which manages to have most of the original cast from Attack on Titan all on top form just like the anime. 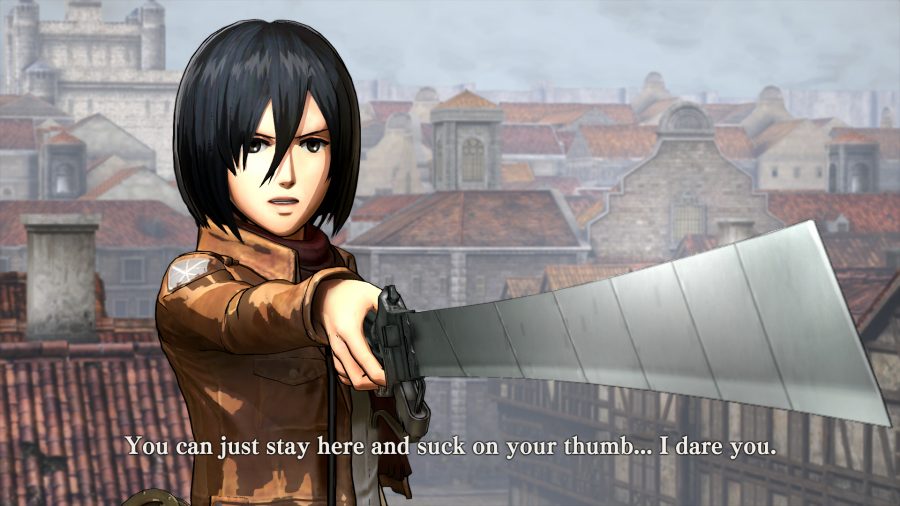 Obviously most people just want to know how fun it is to zip around with the ODM, and thankfully, it is really fun. For those not aware, ODM stands for Omni-Directional Mobility Gear; it’s equipment that combines grapple-hooks and gas propulsion to allow you to grapple to buildings or trees and zip right past them. There’s not a lot of control to it in Wings of Freedom but you can get better at steering it; you sort of point in a direction you want to move, hit a button and hope you end up going the right way – but when you’re gliding above houses within the city walls it’s really enjoyable. There were a lot of moments where I was just going “wheeee!” gliding around, completely ignoring all the people being chomped on by Titans. Later on you’re given a horse and there’s only about two or three levels where you actually need to use it. You continue to start levels on a horse and immediately use your ODM gear – because why wouldn’t you?

The mobility gear also contains blades which you use to deal with Titans. In Wings of Freedom you target a Titan’s body parts which you then grapple onto; once you stop moving, your character will start to glide towards that body part charging an attack as they do so. When hitting a button at the right moment, you can either lop off a limb or kill them at their nape – the nape being the only place where once sliced a Titan will die. This system works well enough; charging up an attack and cutting the Titan’s nape is the best feeling in the game. The biggest of the Titans require you to chop off all of the limbs before the nape can be destroyed; while almost feeling like a time-waster Koei Tecmo make chopping limbs off worth it – some limbs will reward you bonus materials to help create new ODM equipment or upgrade what you already have.

During each level your equipment has durability, meaning your blades will snap eventually and you’ll need to change them, or you’ll run out of gas and need to replace the tanks. Luckily replacing these is very simple, and there are always soldiers around each map that will resupply you if you run out of extra tanks or blades. At first, this along with everything else going on is really confusing. A lot of the time the screen is filled with information and awash with pop-ups telling you this and that; to make it worse characters do talk during gameplay, and as the game is in Japanese you’ll have to read subtitles while trying to look at everything else. Eventually you get the hang of the UI and all the pop-ups, but at first it appears to be a complete mess.

To fill the game with more than just the main story, Koei Tecmo have included a casual crafting system. At the end of levels you get rated on your performance as well as a list of the materials you acquired. The materials along with Regiment Funds – the in-game currency – allow you to buy new pieces of equipment. To have more levels in Wings of Freedom than just story levels, Koei Tecmo also allow you to do Survey Missions. In the story of Attack on Titan the Survey Corps scout areas outside of the walls and Koei Tecmo use that premise to create side missions. Doing these still get you materials and Regiment Funds, as well as Muster Rolls which are pretty useless – they give you a 3D model of characters to move around. Upon completing the game the epilogue missions become locked behind these Survey Missions, but with the way every level in the game works, you can complete some in less than a minute. Every level in Wings of Freedom is a given area where there are a lot of Titans roaming around to kill. Periodically, a character will launch a distress beacon – a green flare – showing a green exclamation mark on your map, and you can go over to help them so they can give you supplies and become a part of your four man AI controlled team, but also there are red exclamation marks which are where you go to finish the level, and in a lot of Survey Missions you can go straight to the red exclamation and complete the level. And yes, I did one in 42 seconds. There’s no real punishment there; I miss out on some materials, but at that point I’m one-shotting every Titan anyway. In the story levels you can’t go straight to those red exclamations and complete them for every level, thankfully, but there are some where you can complete it quicker by not worrying about those beacons. 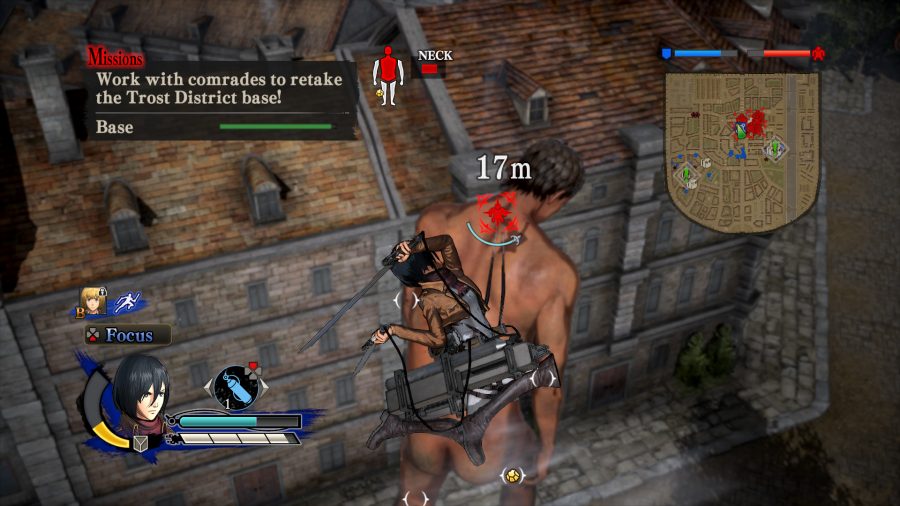 You can do these Survey Missions with friends online or even offline. Everyone picks a character to play as – I always pick Eren for reasons that are spoilers, and most others pick Levi because he is a badass. Usually everyone spawns on the level and goes their separate ways to get an S rank in the level as quickly as possible. However, you will probably come across people who will just go straight over to the red exclamation to finish the level as quickly as possible. Online is an effective way to get Survey Missions to S rank really quickly for all the extra materials. Throughout the game in between levels there is a hub to talk to characters and upgrade gear. If you’ve completed the story, characters will give you requests. They’re all the same, mediocre tasks like “kill five titans”, “get an A rank or above”. Once you do three of these for a given side character you are rewarded with a rather pointless cutscene; a couple of them are a bit funny but they really don’t add too much. In these hubs that appear throughout the story you can also go up and talk to some of the characters with speech bubbles above their heads; they don’t add a lot either, but some can add a bit more character to some of the side characters.

A.O.T. Wings of Freedom‘s gameplay can eventually grow stale. Towards the end of the game, it feels like you really do start the same mission about five times; you essentially attack the same Titan in five different levels. When you look at the gameplay face value you could say the whole game is repetitive, but it does a good enough job of making you want to clear the whole map of Titans and save everyone who has let off a beacon. It may be repetitive,  but flying around with the ODM gear and cutting up Titans is just fun enough that it never really became a huge issue.

I suppose the worst problem with A.O.T. Wings of Freedom is knowing that people will play it before watching Attack on Titan. Wings of Freedom is a great game rendition of the anime, but the anime has so much more to offer in its story and its characters. I can’t complain though if the game gets people interested and watching the anime. The gameplay is fun, but eventually it does begin to feel repetitive. Without a doubt though, there’s fun to be had for fans of Attack on Titan – and it’s definitely worth playing. Some bits are not needed, there’s a lot of filler, and a lot that gets repetitive, but I still had a lot of fun with it.

A.O.T. Wings of Freedom is available on PS4, Xbox One, PC and PS Vita. We reviewed the PS4 version. 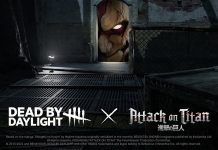