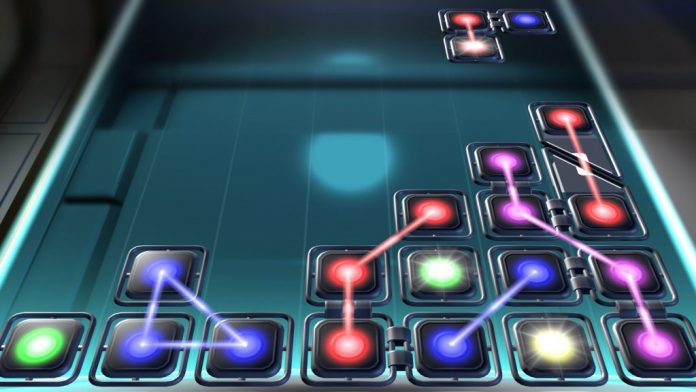 I have always been an absolutely huge fan of puzzle games; from the first time I played Tetris on a BBC Micro in my school’s computer room, I was hooked.

With every new platform I purchase, a good puzzle game is one of the first things I look for so I was really pleased to see the release of Anode by Kittehface Software for the Xbox One, a traditional block-dropping puzzler that is immediately reminiscent of games like Columns, Dr. Mario and, of course, Tetris. But does it carry over those all important addictive qualities? Let’s find out!

Anode pretty much gets straight into it; there’s no fancy intro sequences here, just a title screen and different game options – and what more do you need? What I did find strange though is the presentation of these initial screens: the screen looks like it’s been tilted and it took me a while to realise that this is normal and I didn’t have to adjust my TV at all!  There are four different play modes on offer: endless (keep going until you die), time attack (biggest score in set time), mission mode (complete set achievements) and of course the all important versus mode to play against a friend. There’s also a handy guide that not only tells you how to play the game but also explains key tactics and all the different power-ups that are on offer and what effect they have.

Despite being simple in concept – it’s just a block-dropping puzzle game after all – explaining how the gameplay works isn’t quite as easy so please bear with me. Firstly you have a shape made up of three different coloured blocks that drops into the well. These formations aren’t always straight and although they can be rotated, the order of the colours can’t be changed. Colours can be matched in all eight directions, including diagonally, which soon becomes a really key element for creating chains. Unlike other games in the genre however, matched blocks won’t be removed from the screen until they are “detonated”. To do this you either match them with a detonator block of their colour or a neutral one (that will detonate any colour). A detonator can blow up anything from one coloured block upwards so you have to try and match it to as many blocks as possible. The first annoyance though is that some block formations have “joiners” stuck to the end, which look like little grey triangles. Generally these just get in the way and block your path, but you do have the ability to link two joiners of opposite orientation together to increase your chains by linking up different colours. This is admittedly quite hard and takes some practice, but adds an extra layer of challenge to the game. 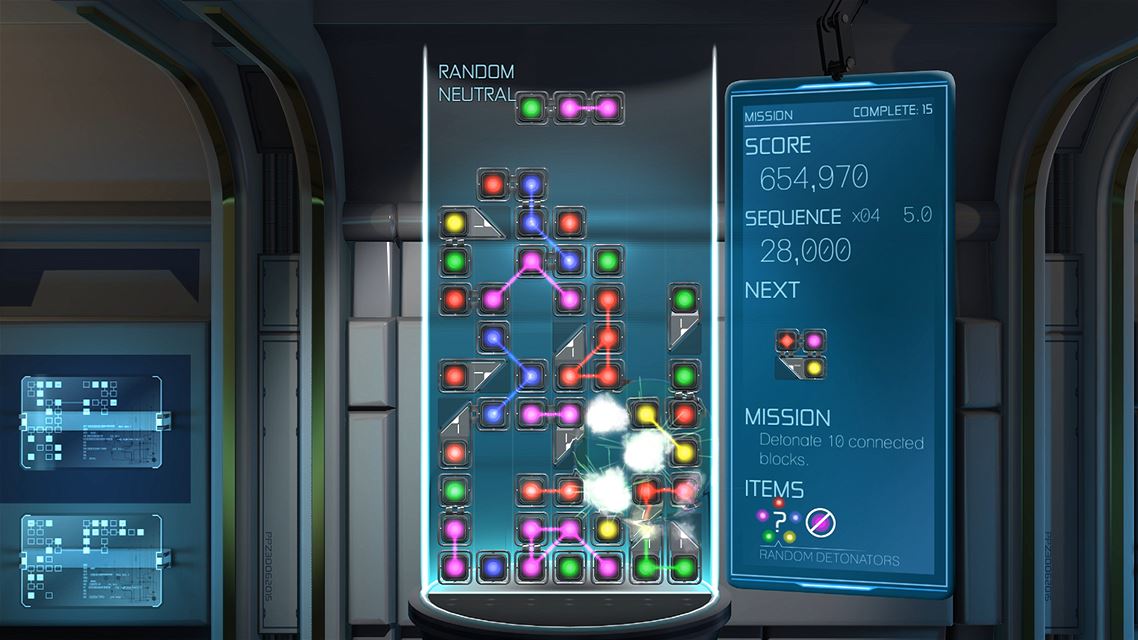 Forming big chains and creating chain reactions awards you with various power-ups that can help you out. The power-ups have different abilities, such as removing half the blocks of a different colour, destroying whole rows of blocks or activating unmatched detonators. Once you’ve been given a power up, you trigger it with a button press, and the side panel does give you little tip to tell you what the selected one does. These power-ups are best saved for when things get hairy and your blocks are a little too close to the top of the screen for comfort. Quite often, you’ll just end up madly bashing the button hoping to get out of trouble without ever really paying any attention to what they are! Power-ups do become particularly useful however within the mission mode for performing some of the set achievements. As in all good block droppers, the speed of the game also increases as you level up, giving you even less time to try and make your matches.

There is no doubting that Anode is an incredibly addictive game with some really nice ideas and a core gameplay mechanic that works really well. However, it’s almost too clever as the added complexity over the basic block matching becomes a bit of an annoyance at times; most notable the linkers which are rarely used and seem to just get in the way. I also think that you should be given the option to rotate the order of the colours, like in Sega’s excellent Columns. Granted, these are fairly minor annoyances but are just enough to stop me giving Anode a really top score.

That said, Anode‘s incredibly low price alone makes this a recommended purchase for all Xbox One owners. When you also add in the crisp visuals and variety of great game modes it’s enough to raise it above many similar efforts out there.

Anode is available on Xbox One and PC. We reviewed the Xbox One version.