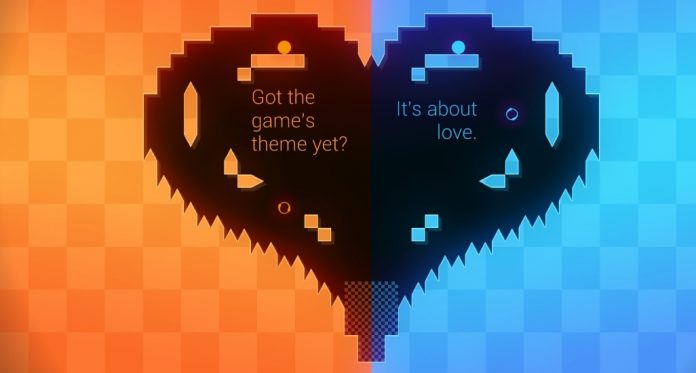 Binaries bridges the gap between puzzler and platformer with grace, in turn creating an experience both joyous and increasingly stressful.

With hundreds of levels ranging from easy to insane, the game doesn’t lack content. While at times frustration may trump enjoyment, it’s hard to stop after just one level. Developers Ant Workshop made quite a splash with their first major release.

If someone asked you what your favorite game was, you’d probably mention one with a puzzle or platforming sequence in it. Those aspects/genres are backbones of the gaming world, and have been for a long time. They are equally engaging and challenging, bringing gamers to test their mental prowess. Binaries does just that. By jamming those two worlds together, we have a very well-designed puzzler with perfectly crafted platforming. While Binaries doesn’t necessarily break the mold, it shows itself to be  a puzzle worth solving. With over one hundred levels, intuitive controls and non-linear design, it’s (kind of) easy to learn and (actually is) hard to master.

Loading up the game leaves little mystery as to what comes next. A grid of interconnected circles lays out the “map” that you will trudge through, starting with level one. The size of the map becomes a bit daunting after thirty or so levels, at which the point the difficulty really begins to spike. Although the difficulty ramps up, it does so at a considerate level, giving you time to adjust to new elements. What is really nice about the structure of Binaries is that the complexity of the levels increases without ever becoming artificially difficult. The most difficult parts of the game are more about execution and finding the best laid plan. Most of my failed attempts came from brash confidence and rushed planning. The methodical player is the successful player in this world; time your
movements, plan your route. 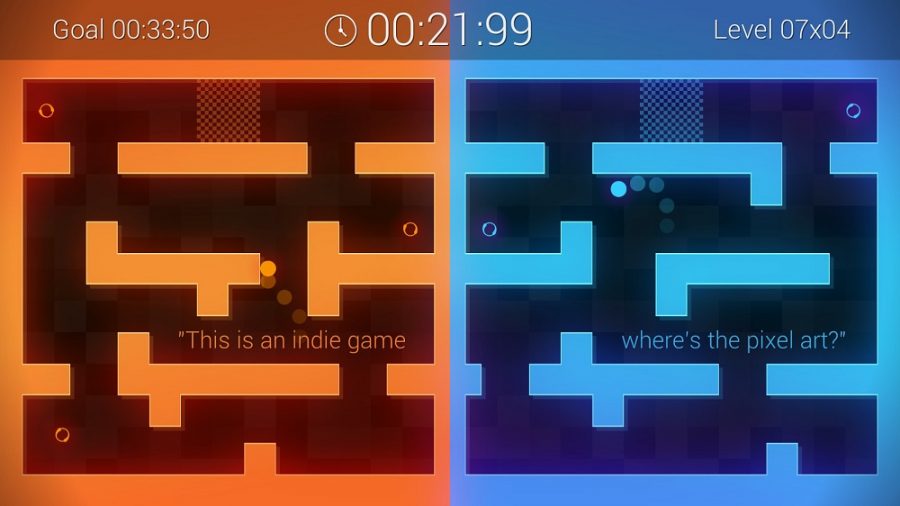 Basically, you control two balls (one blue and one orange) within a non-linear level that is split half-blue, half-orange. Blue needs to find the blue goal, and orange needs to find the orange goal. For a while the levels – and the paths to success – are quite basic, but as you progress through all the stages, the task of getting the balls into their respective goals becomes more overwhelming. You’ll keep one ball in a corner while manoeuvring the other around the whole map, or even flip-flop them from top to bottom. Something I really enjoyed that set Binaries apart from other games with a similar style is its single-stick movement. The balls are controlled by the same stick, with completely mirrored movements. When the stages become more mind-bending, this aspect of the game really ups your stress; it’s easy to focus on one ball and forget the other.

As the game progresses, you’ll learn many tricks that can prolong your success in this game. How you figure these things out is partly on the player, and partly aided through the game’s menacing “AI”, or narrator. The omnipresent AI that makes backhanded remarks throughout your game is so perfect. Whether it’s commenting on the game, the level, or the player, it always uses the perfect amount of sass to really crank up your stress level. It is a brilliant way to amp of the pressure of the game. Aside the AI is a smooth, rhythmic soundtrack that provides some soothing sounds to your pain. When the maniacal AI is mocking you, and you notice your on attempt #50, it’s best to step away and take a breath before you need a new TV. But frustration is nothing compared to the euphoria of completing the top-tier stages.

Binaries is simple in theory, but complex in practice. Learning your way around the stages is challenging, but rewarding. As previously mentioned, this isn’t a groundbreaking addition to the genre but it is well-rounded and executed properly. Great level design, simple controls, and a stellar combination of puzzles and platforming make for an enjoyable playthrough. The ranking system for levels (S, A, and B in order) also helps to drive home the replayability factor by daring you to do better. Keep your hands steady and your mind sharp, because Binaries will test every ounce of your character. Keep calm, relax, and don’t touch the spikes.

Binaries is available on PC, PS4 and Xbox One. We reviewed the PS4 version.