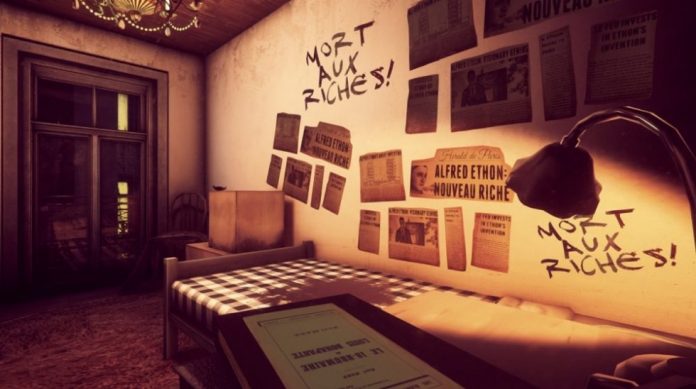 An interesting idea does not necessarily make a good game.

Bohemian Killing puts you in the shoes of a killer during Revolution-era France, trying to subvert the evidence against him by reconstructing a credible story for the night in question. A fine idea in concept, but there’s just not enough game here for me to make a solid recommendation.

Aesthetically speaking, Bohemian Killing is ugly. I understand that it’s probably created by a tiny design team, but there’s just no way to sugarcoat how late PS1-era modelling in this day and age can distract from the narrative. Between this and the lifeless animations, it would’ve been far better to go for some stylized visual theme as to not create a problematic diversion. The sound design goes hand-in-hand with this, with the game fully utilising stock effects, and the lack of voice-overs making for some awkward moments with silent NPCs. The main characters are voiced reasonably enough, but the French accents littered throughout the game are pretty laughably bad to boot.

This would all be forgiven if there was some substance underneath the unpleasant veneer; sadly the idea behind Bohemian Killing is about where the positives end. It’s a fun concept: you have a small setting where you’re retelling a story according to the evidence laid out against you. This entails being in the right place at the right time, manipulating details such as if you were bloody etc. and interacting with the world to lend credibility to your alibis. But the game is extremely vague about how to go about some of these things, leading to a bad case of what I describe as “Hitman Syndrome”. I loved the Hitman series but I hated how in its enclosed sandbox world, it was impossible to tell exactly what you’re allowed to do and what the results of certain actions will be without actually playing through in a “trial run”. For instance, I was given a choice to say goodbye to the woman I eventually killed or turn on my torture device. When I decided to go for the device, the woman promptly hit me over the head with a piece of metal. While this was indeed the result I was looking for, it was entirely unclear to me how I had gotten to this point, what options I needed to take in order to complete my goals, and how turning on my invention prompted her to assault me. Would she have done the same if I told her goodbye? 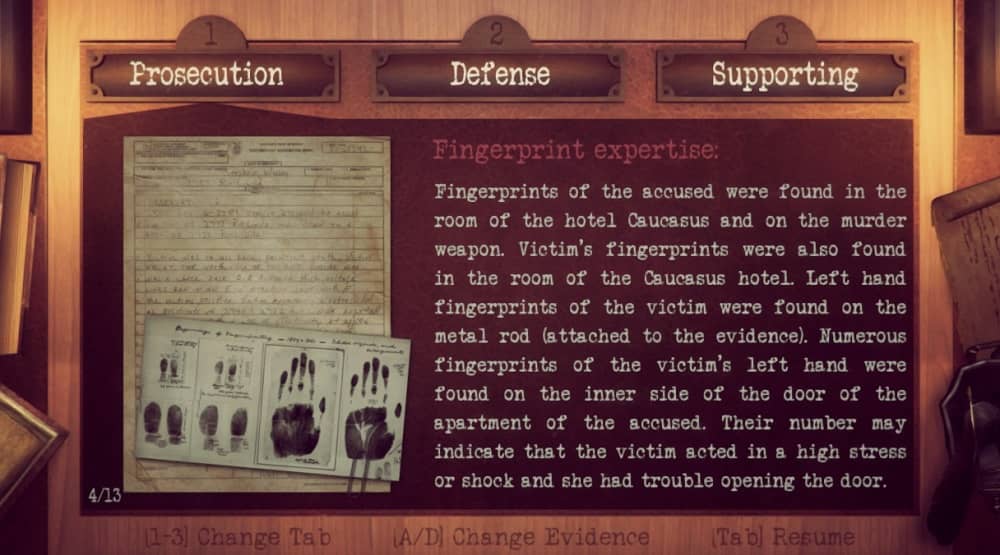 This issue is further compounded by the seemingly random items which have relevance in the game world. Things such as littered newspapers on the ground can prompt dialogue or even evidence in your defence, but knowing what to look for and where is either stumbled upon by chance or encountered in a previous unsuccessful playthrough. The game is meant to be played many times over, to perfect the route and contextual presses necessary for the perfect defence, but it’s wholly unsatisfying when this is accomplished by stumbling around in the game world a handful of times to figure out where all the pieces are.

All of this is theoretical however, because I managed to get an acquittal on my second playthrough. I didn’t really feel accomplished in doing so however, as while my first run had scouted out some major points to expect, I feel like I had missed quite a lot and actually figured out very little. Since all the solutions are already laying about, it’s really just a matter of finding them, not really doing any problem solving of any kind, so I felt more like I was being told a pretty boring story with sub-par pictures rather than becoming a criminal mastermind who got away with murder. I’m sure there are other results that I could have gotten: jail time via obvious lying, absolution via insanity etc. but trudging through the same tiny world over and over seeing how much I could muck things up just never appealed to me.

Bohemian Killing‘s world just feels so fake, and once I hit the end after about an hour total, there was nothing to draw me back to figure out what I had missed. The writing is sub-par as nobody other than a few characters (not including the woman you murder) actually speak, and the plot line is stone cold boring. The environment is cliché and ugly. The ambience is completely confusing: I think it’s trying to be eerie or creepy but right from the idiotic, pixelated expression of your main character after he clunkily stabs a woman in the intro, or how the woman robotically paws at you before you stab her, just made me laugh out of pity. There’s no drama as you’re figuring out what the hell to do, much of which actually included wasting time. There’s just not much to enjoy when all was said and done. It’s a short experience end to end which sprouted from a solid idea, but whose ambition far exceeded the capabilities of the developers. Maybe consider it if it’s extremely heavily on sale, but for it’s current price point you’d be much better served buying a good book.

Bohemian Killing is available on PC.