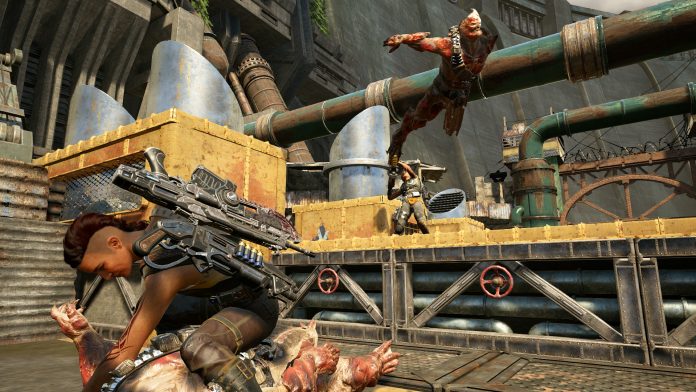 Since the multiplayer beta back in April, Gears of War 4 looks a completely different beast.

When eager COGS donned their armour and grabbed their gnashers a few months ago, some were left far from impressed; us included. While we were fans of the familiar, visceral gameplay, gleefully popping heads and wall-bouncing with delight, the tired visuals and choppy frame-rate didn’t give us that heady rush – that next-gen excitement we were so used to experiencing every time we stepped into the gory realm of man-mountains and gruff voices.

Judging by the new ferocious gameplay though,  we find our worries chainsawed into tiny chunks. In the new multiplayer map ‘Impact’ (courtesy of IGN), we see brand-new robotic enemies, the Deebees, face off against the Swarm in buttery smooth, 1080p, 60fps, team death-match action, showcasing the true mettle of Unreal Engine 4.

The flaming husk of a downed plane separates the map, and being symmetrical, there’s a nice balance to the design that should make it a level playing field (or city devastated by warfare). We also get a peek at some new weapons and executions, including a new punchy SMG called the Enforcer and a death blow that involves a judicious use of the shotgun as a baseball bat – propping them up by crunching on their leg with a quick stomp, before thumping them right in the back of the head. Glorious.

We’re excited to see more of Gears of War 4 as time ticks ever closer to its tantalising October 11 release for Xbox One and PC.