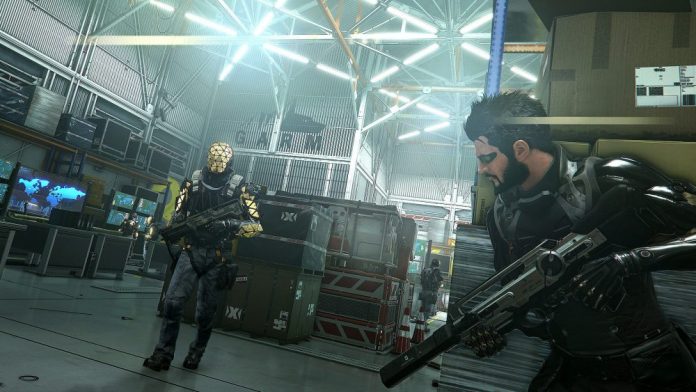 Much of what Deus Ex: Mankind Divided attempts is admirable.

On paper, it seems like there should be an awful lot to love here and during my twenty some odd hours with it there were certainly things I did, indeed, enjoy the sticky pants off of. But Mankind Divided is absolutely a game that, were I not playing it for review, I would have given up on in the home stretch, weary of its many mechanical and narrative missteps.

Adam Jensen is back, yeah? Alright! *Guitar riff* No? Just me, huh? Actually, not me either. Who cares about this guy, really? He was a banal, scowling, monotone white dude in a great-looking coat in Human Revolution, and Mankind Divided has, if anything, leaned into that black hole of characterisation. Jensen still seems entirely incapable of interacting with anything other than every laptop and electronic lock in arm’s length. I don’t know if that’s an intentional choice (Eidos’ attempt to make him a literal and metaphorical tool)  but it doesn’t work. Jensen’s stoic disconnection from the world-shaking events surrounding him as well as the very personal ones right in front of him does absolutely nothing to engender a sense investment in any way.

After the events of Human Revolution Adam Jensen spent two years alternating between sitting at the bottom of the Arctic Ocean and sitting in a bed in a medical clinic in Alaska. He’s lost a large chunk of his memory (convenient to the plot but in no way relevant to it) and upon returning to civilisation has joined Interpol’s Task Force 29 through a series of events never fully outlined. Everyone from the previous game is absent (except for David Sarif who does absolutely nothing) and the only major consequence that seems to have resulted from the Panchaea incident, where most of the augmented population of Earth was made to viciously attack the unaugmented portion, is that augmented citizens are treated like second-class citizens, forced to carry expensive paperwork, and are deported to a dystopian city known as Golem if they don’t comply. At least that’s what happens in the Czech Republic because Mankind Divided doesn’t deal with any other location.

Really. Yeah, there are a couple missions in other parts of Europe but none of those give you any idea of what life is like for the augmented population outside of Prague. For a game about the worldwide implications of transhumanism, Mankind Divided‘s narrative remains surprisingly local and infuriatingly detached. Our hero never experiences the consequences of the so-called “mechanical apartheid”. His work, his social status, and his attitude all place him far above the need to confront the ugly reality of his ostensibly diminished station in life. Sure, he gets derided by his coworkers every now and then (if you consider the term “clank” to be derogatory) and the cops ask for his papers ad nauseam but if that’s the worst that can be expected then the mechanical apartheid has passed Mr. Jensen over. 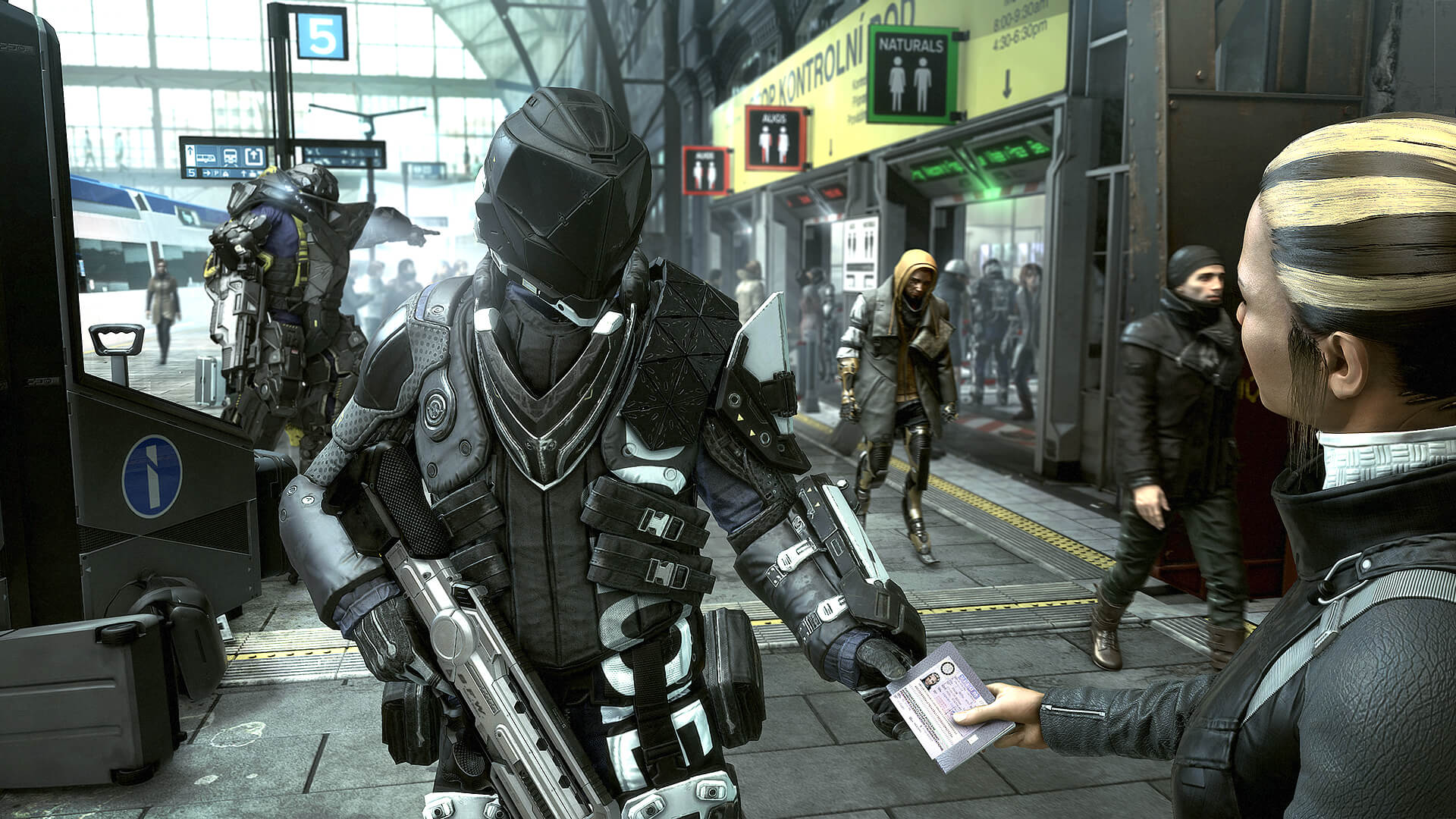 But perhaps it shouldn’t have. Perhaps Adam Jensen is the one augmented individual in this world most deserving of careful monitoring and martial control because Adam Jensen is an unmitigated menace. Assault, theft, breaking and entering, corporate espionage, forgery, human trafficking, and generally being a public nuisance. If there’s a local or international statute against it, Adam Jensen will violate it with an alloy middle finger stood turgid to the man.

From the time you enter the game’s single hub city of Prague you are granted nearly unlimited freedom to go wherever you want, kill whoever you choose, and steal anything and everything that isn’t nailed down as long as you have enough augments active to reach it. Lock in your way? Hack it. Wall between you and that stack of biocells? Knock it down. Cop standing in the way? Punch him in the throat! And yes, that level of unrestricted freedom sounds amazing, but what it amounts to, in practice, is an undercutting of the narrative depth that Mankind Divided attempts to achieve. When I’ve already broken into every single apartment in Prague and laid their contents bare with little to no consequence, what point is there to return to a particular location when the story tells me to? I’ve seen it. I’ve done it. I. Took. Everything! And I kind of get the anti-aug movement’s point.

The same can be said for Mankind Divided‘s core mechanics. By the time I reached the (admittedly awesome) final mission I had already practiced the core gameplay loop so many times I just wanted to get it over with: enter a restricted location, sneak around, avoid any altercations unless they’re on my own terms, take everything, hack security systems and laptops, reach a room where a cutscene plays, and maybe make a choice that I won’t entirely understand because I don’t give a shit about any of these people. Rinse. Repeat. And it’s not the core that’s flawed; it’s the fact that all its freshness gets wasted on the least interesting content in the early to mid game before you hit the final missions and, just as things start to take off, well… it just ends. And I don’t mean that like “awwwww, I wanted more”. No, it just ends. Newsreel, roll credits in the most literally sense that statement can be understood.

Little has changed since Human Revolution. In any given situation you are provided with options to go loud or silent and lethal or merciful depending on your personal preferences and how you spec out your augments. Jensen has been reset (because this is a video game so of course he has) so it will take you most of the runtime of the game to feel like the same badass you were at the end of Human Revolution. There’s the promise of some new, untested augments (introduced through a B-plot that goes nowhere) that largely add nothing to the template as they’re all interchangeable with other gadgets and augments. Even the new overclock mechanic that forces you to deactivate unwanted augments to balance your system so it can handle the new ones means nothing and can be completely undone in the late game. 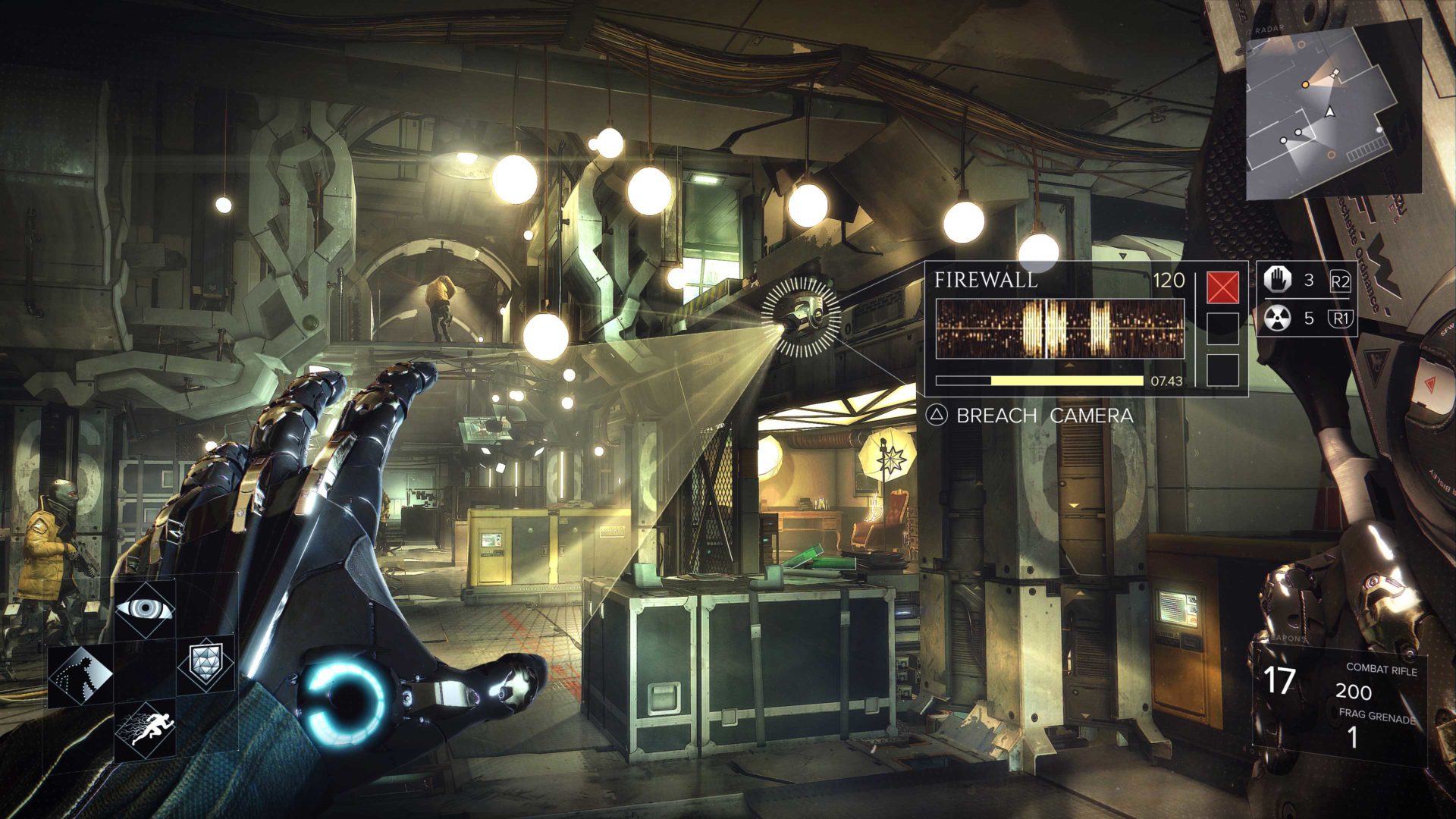 It sure does look good, though, with beautiful texture work, great lighting, and a level of density and detail in the environments that make them feel like actual locations with a great deal of history. The incredible proliferation of options when it comes to routing your way through some of the larger environments is a clear standout and worth mentioning as a highlight. The level design team earned their paychecks and deserve a round of applause. Applaud, I say!  Alright, reign it in now, because that praise must likewise be framed with a caveat: the load times are atrocious. The worst I’ve seen this generation. Over three minutes to transition between the four sections of Prague, which you’ll be doing a lot.

All that being said, all that negativity over Deus Ex: Mankind Divided‘s also-ran attitude, I still had a good time, and Mankind Divided isn’t a bad game. It’s a very large, stand-alone expansion pack for Human Revolution that has no impact on the world and offers no reward for your time invested beyond the fun you can have punching NPCs in the face at the end of a side mission just because they dared to question your actions. It’s a dull, gruff, disinterested, robotic sequel that slips into the persona of its main character like a synthetic arm into a well-fitted trenchcoat.

Also, you can buy all the progression in the game with real money. $0.99 per Praxis kit. These kits have also doubled in price for in-game currency over the last game. Gross, Square Enix. Really, really gross.

Deus Ex: Mankind Divided is available on PC, PS4 and Xbox One. We reviewed the PC version.