Announced back in 2015, Fairy Fencer F: Advent Dark Force is yet another PS3 release updated and optimised for the current generation. Does Compile Heart’s JRPG justify double dipping? Actually, is even a single dip recommended?

Fairy Fencer F hit the market at the tail end of the PS3 era (a month before the PS4’s initial release date) garnering mixed to positive reviews. Built on the solid gameplay mechanics of the (in)famous Hyperdimension Neptunia series, Compile Heart’s attempt at an ever so slightly darker RPG failed to leave too much of an impression on the market at the time. Fairy Fencer F: Advent Dark Force promises to improve on the original in countless ways include visuals, fight intensity and depth/length of the storyline.

Now, Compile Heart (a subsidiary of Idea Factory) do not have the greatest reputation in the gaming industry. Due to their flagship franchise’s love of scantily dressed heroines, they have more or less being pigeon-holed as a cheap fan-service company for those not really searching for a proper RPG. Although Neptunia definitely earned most of its reputation, what often gets overlooked is how fantastically likeable the characters within Compile’s games tend to be, and their very robust upgrade system. The recent Megadimensional Neptunia VII and, thankfully, Fairy Fencer F: Advent Dark Force highlight just how well the company gets the joy of grinding.

Before I get ahead of myself, let’s talk about the story. Who is a Fairy Fencer? And what dark force should they be weary of? Lead by the charismatically uninvested Fang, players are introduced to a world founded on a centuries-old conflict between a Goddess and a Vile God, who are now frozen in time and space. These deities used special weapons during their war called “Furies” which were wielded by “Fencers”. 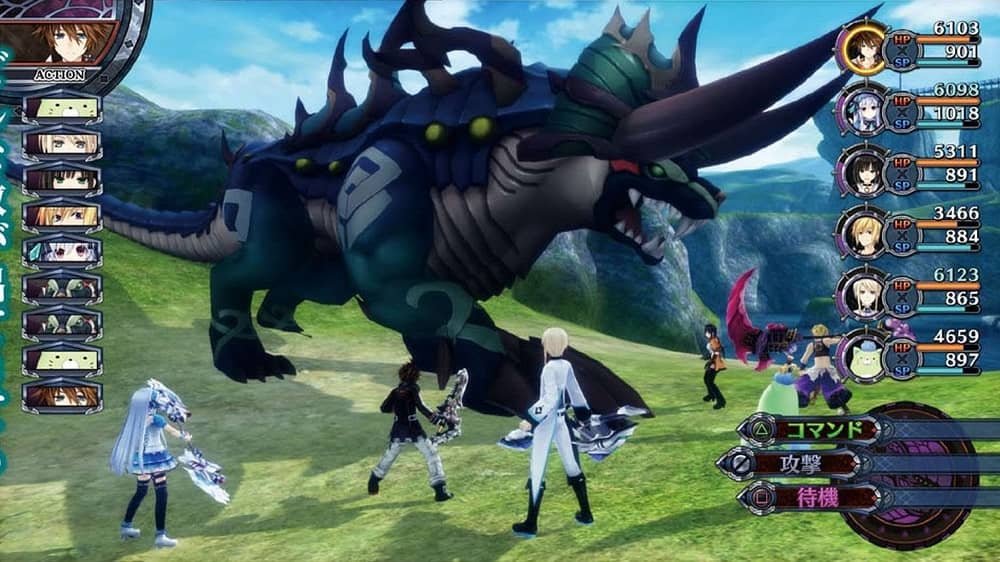 These weapons can be found in the form of fairies, and due to their immense power, present-day “Fencers” are constantly searching and fighting over every single discovery of one. Fang accidently acquires one of these weapons, presented in the form of Eryn (a fairy suffering from amnesia), and is unwittingly sent on a journey to collect all the fairies to re-awaken the Goddess.

Along the way, other “Fencers” and their “Fairy” join his cause. Obviously, not everyone is quite as helpful; a few situations even end in a fight to the death. As new “Furies” are collected, in the form of cards, one can be used to revive a small piece of the Goddess or Vile God. The choice is completely up to the player, with each path leading to different endings depending on how many cards have been spent on the Goddess or Vile God.

These separating paths are the biggest addition made to the PlayStation 4 release of Fairy Fencer F. While the original PS3 version only had the Goddess storyline, with one ending attached, Advent Dark Force offers a lot of unique outcomes (with Goddess path having a good/bad ending as well). Compile have also introduced unique endings for each one of the girl characters, providing another incentive to play through the story mode more than once.

As a story, Fairy Fencer F: Advent Dark Force earns a grade more than what is usually delivered by the company. While the good-natured humor remains, as does the fan-service (although not as present as Neptunia), the plot is not afraid to get dark and genuinely intense at certain points. This is by no means a parody game, which makes the rare fan-service scene even more jarring.

Unfortunately, half-way through the plot, the reset button is kind of clicked, which results in a massive re-thread of all the dungeons previously visited. Although I realise that this is a budget title, there definitely is a lack of variety when it comes to places to visit (even with the bonus free DLC areas).

Visually, Advent Dark Force definitely fails to shake off its dated origins. Since most JRPGs, in general, tend to not be very graphically impressive, a PS4 update of a late PS3 release will definitely not catch anyone’s attention. This is especially apparent when it comes to the attention to detail given to the environments within dungeons, where most of your gameplay hours will be spent. The flat backgrounds never manage to feel alive, or even interesting. 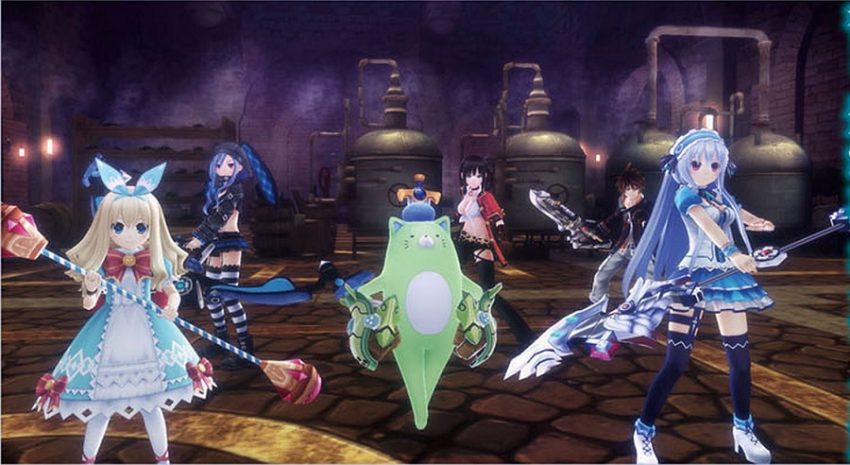 The ripped-from-anime character designs and synth-heavy soundtrack fare a bit better, although they do not offer anything new to the genre. Graphically, the bosses are often the highlight, with a variety of mecha, demons and other “Fencers” that are not only fascinatingly complex but can also effectively convey the back-story of that particular character with a mere glance at their design.

Gameplay wise, Fairy Fencer F offers a turn-based system that can field up to six player control characters. Nearly a carbon copy of Neptunia‘s system, players equip combo, skills and magic attacks (requiring SP) which can be used on a variety of enemies. During a battle, a blue circle forms which limit how far a character can travel. Within that area, the player can freely run around and plan who to attack (or wait, which pushes the turn down a slot).

Each character can not only fuse with their fairy to form a strong combined version but also has a special ability that only they can use. For example, Fang’s “serious face” boosts his attacks by 1.5, while also draining 30 SP per attack. These abilities always come with a risk/reward system, adding a level of strategy. There is also the Avalanche Attack, triggering a massive string of combos using the entire party after the guard of an enemy is broken.

The system works really well, to be honest. Battles fly by (especially since everything can be skipped with L2) and the flashy skill/magic attacks are a lot of fun to pull off. This is further enhanced by the grinding system implemented, where every single battle leads to genuine rewards. Characters do not level up just with experience but gain “Weapon Points” to be used to extend their combo count, unlock new skills and attacks, and level up certain stats like Physical Attack and Range of attack.  Even the special abilities can be leveled up using this method.

Every single fight rewards WP, even when squashing severely under-powered bugs while searching for some random loot to complete a side quest. Nothing is pointless, and these trickle down at a fast enough rate to be worth the effort but are not quite as overabundant to require no grinding.

Beyond that, Challenges (Example: Jump 10 times as Fang) award small boosts to stats not upgradable via “Weapon Points”. It is damn near impossible that someone spends even 10 minutes playing Fairy Fencer F: Advent Dark Force without being rewarded with some stat boost. 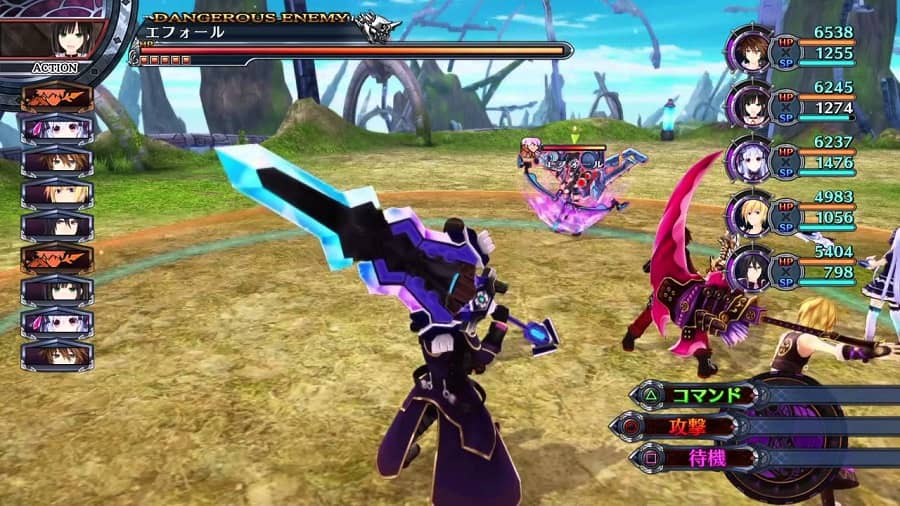 Obviously, no RPG would be complete without some customisation options. Weapons can not be changed (although each character has four version of their weapon) but the extra “Fury” assigned to that weapon can be. These cards not only level up to 10 but provide unique benefits and stat upgrades. On harder difficulties, matching the right “Fury” with the right “Fencer” is a must. New armor/accessories can also be bought/discovered.

Considering all that it has to offer, Fairy Fencer F: Advent Dark Force is probably the best JRPG currently available on the PS4 (although stiff competition is incoming). A loveable cast, fun gameplay, and an addictive reward system aid the often meandering story, although it can’t help but show its last-gen roots. Despite their reputation, Compile Heart continue to deliver solid games. I just hope they catch up to the demands of the current generation before too long.