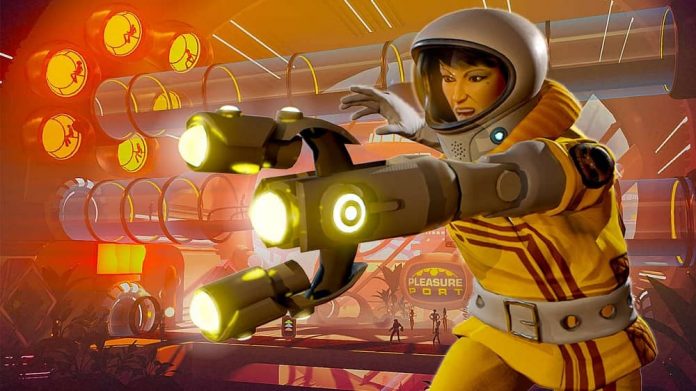 The real question that Headlander asks is: who doesn’t want to be a floating head in a 1970’s version of Guardians of the Galaxy?

That’s right – no one. Or should that be no-body? Heh, heh. Disclaimer: that’s the only head/body pun used in this review (promise). Even if they’re ‘armless anyway. Okay, that was the last one. GameSpew previewed Headlander at EGX Rezzed earlier in the year and predicted it to be fantastic. It doesn’t disappoint.

When you boot up Headlander you chose your character. But unlike other games, you only chose a head. None of this torso, legs etc. rubbish. You’re a floating head propelled by neck thrusters. A head with memory loss at that. And you’re gonna love playing it that way. Headlander has been typified as a Metroidvania-style game because it seems to conform to those characteristics, but placing it firmly in that genre takes focus away from the game itself and what a great game it is.

Headlander’s setting and universe is a 1970’s, Saturday Night Fever-inspired futuristic world. In this future, most of human consciousness has been uploaded into a cloud-based storage. Humankind has given up their bodies in order to occupy the framework of robots. An AI called Methuselah with malevolent intentions has assumed control of this new robot-kind as you – the last human (albeit without a body) – have been awakened. It’s a world that needs saving from sci-fi dictatorship – where “enthusiastic support is mandatory”.

So off you go – a rocket-fueled and space helmet-suited head armed with a vacuum sets out to stop a sci-fi Rupert Murdoch. If that doesn’t bring you into Headlander‘s brilliant world then nothing will. It’s wonderful and I daresay even dryly prescient. 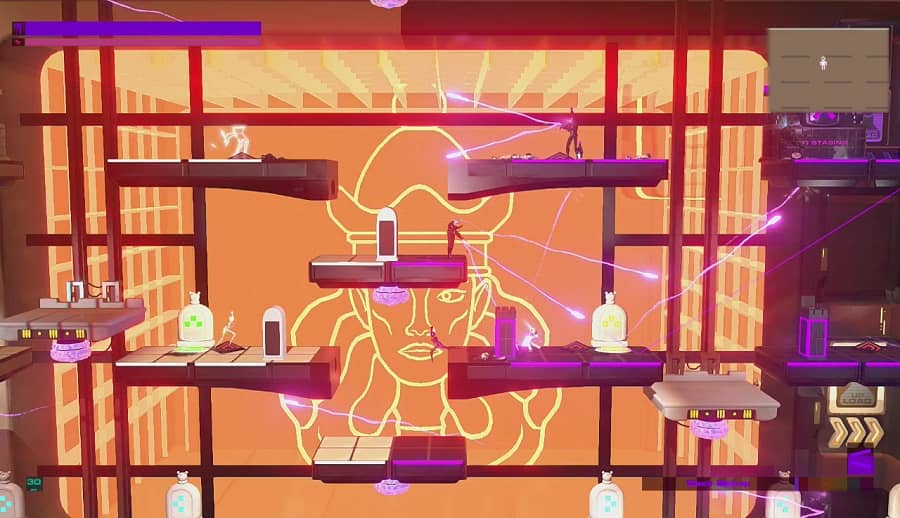 The presentation in Headlander is consistently wonderful. The design of its levels is constantly interesting, varied and bright. The seventies aesthetic is not taken to the extreme so that it drowns the original visual flair from developers Double Fine. Indeed, there is a late 1960’s, early 70’s Californian suburban-home style in some of the locations – complete with shag carpets and ornate fireplaces – but Headlander embodies this visual style appropriately. Even though the game is a 2.5D side-scroller, it never feels like one. In a good way, of course. Its presentation and technical performance elevate it above the limitations of a side-scrolling game.

Scripted character moments and interactions in the game are brief but brilliant. The writing in the game is wry and unpredictable. Headlander has a genuine sense of charm and wit in its approach and not many jokes fall flat. Many smaller moments, such as a robot’s whooping as it’s dragged along the levels, are nice – and hilarious – touches. It’s these small touches that are reminiscent of the early LEGO games.

As well as a slightly barmy yet colourful story, Headlander plays superbly. Its gameplay mechanics are well-thought out, fluid and, most of all, fun. It would seem that being a disembodied head would limit the in-game interactions but Adult Swim come off as the chief champions of disembodied head mobility.

The main focus is on puzzle solving, to which – in more ways than one of course – you use your ‘noggin. Your head thrusters have the ability to use a vacuum which can simultaneously be used to solve puzzles and suck off the robotic heads of the other citizens. It feels fluid and intuitive and its truly a fantastic element of the experience. It may suck in nature, but as a gameplay mechanic it’s far from it. Also, each robot has a dedicated dance button. Why? Why not? It’s groovy, man. 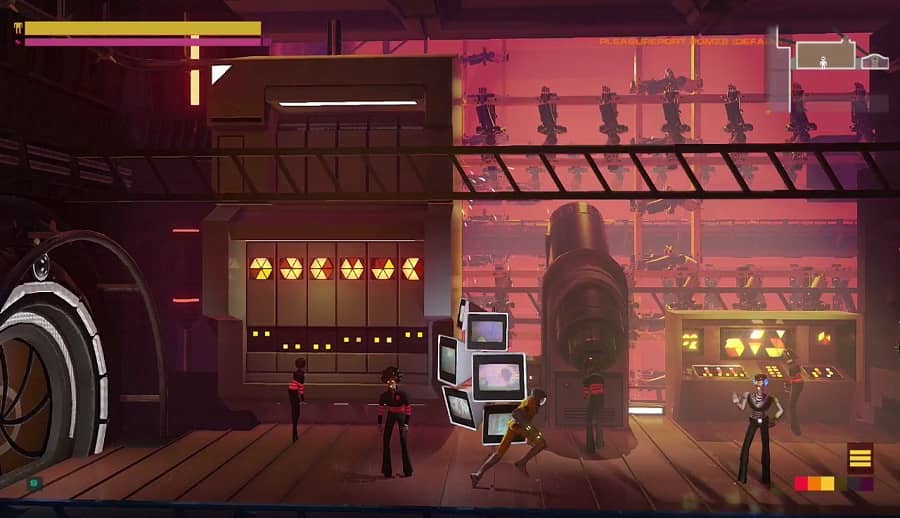 Some of the puzzles are dragged out a little too much however, venturing into dreaded “fetch quest” territory. They never feel elongated to the extent that it feels as if the developers were padding out the levels, but a fraction of their length could have been shorn off. Although the game is not the longest game you’ll play in your library, it’s satisfactory. Nothing to add, only a small amount to possibly be taken away.

The only slight – and I mean slight – disappointment with gameplay in Headlander is the frequent awkwardness of its shooting. For the most part, shooting in the game is functional, i.e. used for puzzle-solving. When shooting serves a combat function however, it all but fails. For example, it renders the couple of boss fights pretty superfluous (especially the Queen fight). Not really a huge letdown, but a tricky mechanic to grasp when used in the games combat system.

Being inspired by the 1970’s, the game should be expected to have a solid sound design. It performs this suitably. A synth-inspired soundtrack combines with unorthodox voice acting as the action unfolds on screen, disco balls and dance floors in the background. Some robots speak in a Californian hey duuuuuude surfer cadence when the player walks by them; the environment and its sounds have the same genuine charm of the script. An added bonus is the narrator of the game, Earl, who puts on the best space cowboy impression in the galaxy as he guides you through the game. Like a Star Trek Sam Elliot.

When the team previewed Headlander at EGX Rezzed they were justified in their excitement. Double Fine and Adult Swim have produced an immensely assured game that is highly recommended to any gamer. It’s a simple game in its approach: its mechanics are not over-wrought or complicated, but it’s top quality fun. Headlander is of the few games in recent memories to garner a true belly laugh. Now where did I leave those flares and dancing shoes? I’ve got a space disco to attend.

Headlander is available on PC and PS4. We reviewed the PS4 version.