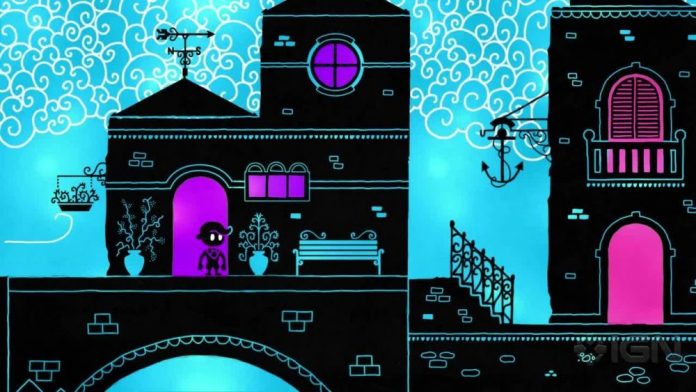 From two of the creators of the hit-indie game Q.U.B.E, both Henry Hoffman and Dan Da Rocha come together once more with their studio Fiddlesticks to deliver what is essentially a mixture of inspired puzzle solving taken from games such as Braid, with a similar art style and atmosphere to Limbo, mixed with some hint of Thomas Was Alone.

The team has been hard at work, making sure that whilst Hue draws inspiration from many familiar sources, the game still stands apart as a completely unique and thoughtful experience.

Hue has you play a playing as a young boy in search of his mother, who had been experimenting within the study of colours. As you progress through each environment, you come across notes left by her, narrating her progress within her field of study and the challenges she faced. Each short narration sets the tone nicely for the game, bringing about many profound philosophical questions to dwell on that are loosely connected with some of the themes in the game – such as the exploration of existentialism similar to The Matrix (heavy stuff for a colourful platformer!). If you don’t want to debate humanity and its meta-philosophy within the context of the universe however, you can rest easy knowing that these short audio narrations are brief, and simply serve as narrative fluff. They provide some relaxing downtime in-between solving puzzles and performing light platforming challenges.

Platforming and puzzle-solving are two of the main gameplay mechanics at play here; solving puzzles is the mental challenge, whilst some very basic platforming movement is the physical side of it. Between the two stands the challenge of navigating and maintaining awareness of a sort of 4th dimensional space: colour. By shifting the hue of the background, you make any objects of that colour simply disappear into the background, meaning they have no physical presence within the world. This includes not being able to stand on them, not being hurt by them, or having them affect other physical objects within the scene. If a boulder is rolling towards you, activating a certain hue might make it disappear, or you can change hue to have a wall re-appear which blocks the boulder in its path; or maybe you want to protect an object from changing colour when being hit by coloured goop, so you activate the same colour so that the goop disappears and doesn’t affect the object. There are many utilities for the colour switching mechanic, and Hue makes good use of all of them.

The game establishes a basic mechanic within a controlled play-space, and then evolves that mechanic as the theme for that area. You start with no colours to choose from in your colour wheel (you choose a colour using the right analogue stick), and eventually find more as your adventure progresses. The hub world design means that you cannot visit locations out of order, and you won’t find yourself lost on where to go next. Once you unlock all of the colours, your adventure takes you to a new location, where you are tested on all aspects of what you have learned over the course of the game. From start to finish, Hue will truly test you in a number of inventive and mechanic-specific ways. 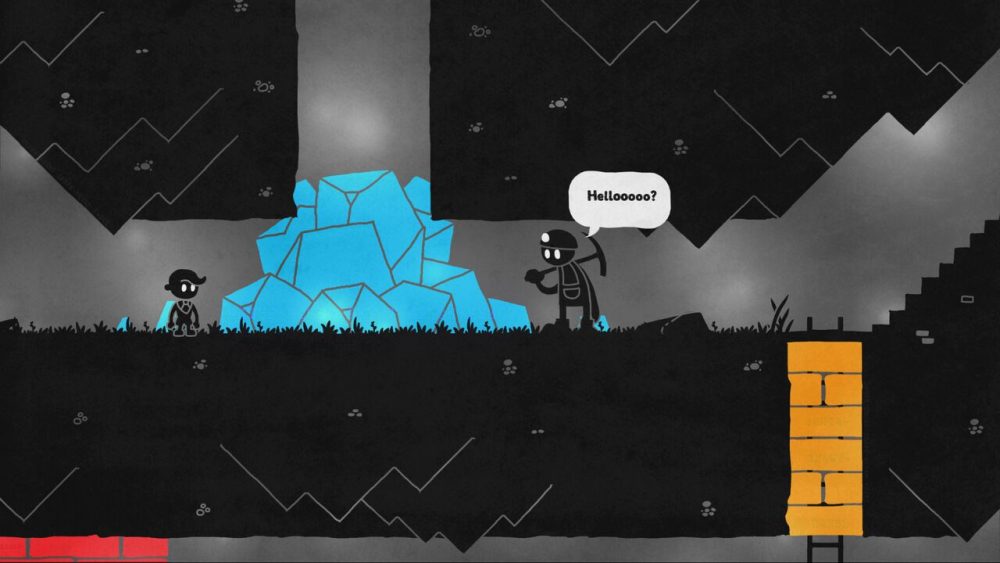 The music is very atmospheric, and its simplicity is what helps drive the mood, which is also inherent in the art style of the game. Much like Limbo, everything is shown in a mixture of strong silhouetting and plain colour fill, but the colour switching mechanic makes sure that important things stand out. The puzzles are well thought out, though there isn’t much room for freedom of experimentation as each puzzle has a specific solution, with only a few offering faster or more efficient solutions. The trade-off for focusing on very tightly designed puzzles in lieu of open-ended ones however, is that the experience is much more engaging; puzzles are all the more impressive and thought-provoking upon first engagement.

Once you’ve finished the game, you’re able to revisited previously completed areas to find hidden collectibles that you may have missed on your first playthrough. These require thinking outside of the box, and allow for more experimentation. The gameplay may be based simply on moving left and right, jumping, dragging/pushing boxes, and changing colours, but with that simple toolset, the game accomplishes a lot. It’s through the unique colour changing mechanic that most of that expression is made from the player; the ability to dodge, interject, modify, translate, make vanish, and activate objects is all part of the gameplay that extends from the unique mechanic.

Initially, Hue‘s jumping ability felt a little vexing. Being able to cut my jumps short by releasing the button quicker, or make them higher by holding it longer, felt like a staple of the platforming genre that was missing from this experience. After a while however, when having to concentrate on the task of switching colours on the fly, it became apparent that also keeping track of the length I held the jump button would have been too much. The game goes into slow-motion as you change your colour via the colour wheel, which helps you time your actions much better, but having to keep track of multiple things at once would have been a nightmare in some situations, and for that I’m glad the jump button has a “press and forget” philosophy, removing that responsibility of control from the player. In fact, it even plays into the puzzles as some obstacles are height based; their obstacle only existing because I have only one jump height, forcing me to manipulate the environment and find a way to jump from a higher or lower starting point to proceed.

At its heart, Hue is a very imaginative and unique puzzle-platformer, showing what can be achieved from stretching simple mechanics into different flavours and combinations. Puzzle games are one of the hardest genres to design as they require developers to seek out ways to achieve a lot with very little. If you artificially pad the length and content of a game with a random mixture of puzzles that aren’t closely related through a simple and unified game mechanic, you end up not allowing the player to learn from previous experiences/challenges, as their gained knowledge will have no effect or usage in the upcoming puzzles. Hue is the rare kind of experience that takes those lessons learned in previous challenges and carries them forward, developing on them further, and re-introduces them later on in unexpected ways. 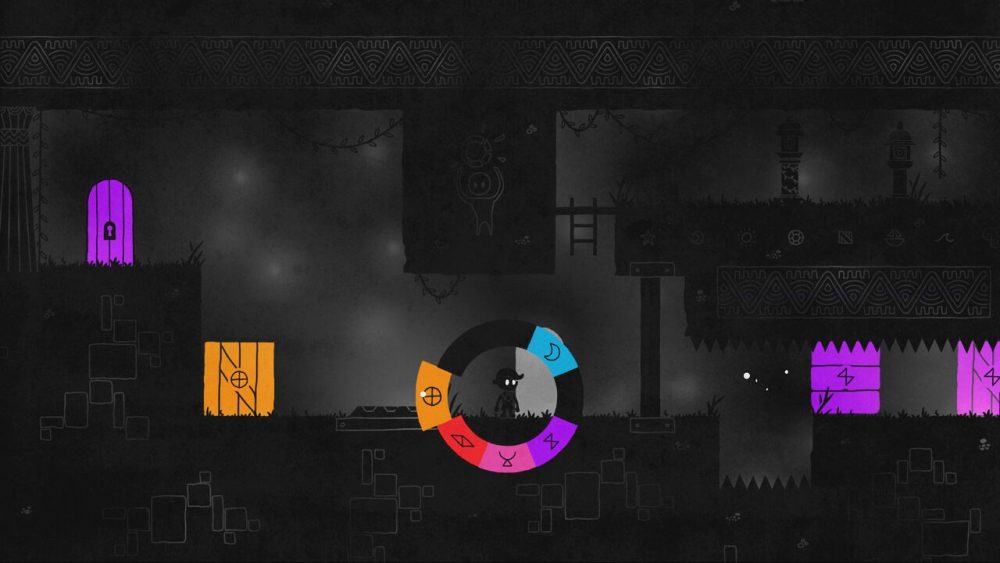 The length of the game is perhaps the only issue I might have with it. For the price it’s reasonable, and it’s important to keep in mind that it’s incredibly difficult to design lots of puzzles to make a game last for a long time without running into the issues I just mentioned previously. It took me around three hours for my first playthrough, but that was without breaks or too much trouble finding the solutions to the puzzles (your mileage will vary!), and with no interest in finding the collectibles. Taking your time to enjoy finding those hidden collectibles, or replaying the game afterwards will pad this out longer, depending on what you want out of this experience and how well you solve the puzzles.

On the flip-side, had Hue lasted any longer than it did, the pacing would have been off, and it would have overstayed its welcome. It reached a conclusion in a satisfying way, with a gradual difficulty curve that managed maintain that all-so-sought after “flow” that developers pursue in their game experiences. Even if you’re the type of person that isn’t great at puzzle games, I would still recommend that you give Hue a try. Whilst the puzzles are tricky in places, and a few had me scratching my head for a few minutes, they all usually present their solutions logically through their carefully designed placement. In that sense, hardcore puzzle gamers might not like what Hue has to offer, as each puzzle does not always require one complicated solution; rather it’s usually a series of smaller puzzles that are solved in sequence in order to pass through an area. A few puzzles go against that expectation, but most often, trial and error will get you through the game. If you try something out enough times, it’ll eventually click and you’ll have the eureka moment.

Clear and concise art style, atmospheric audio, well-designed puzzles and replayability are what Hue offers for a very modest price. It’s a definite buy for people who enjoy puzzles, especially as it revolves around a unique gameplay mechanic that stands out from the crowd. Even those who aren’t big fans of puzzle games should consider picking Hue up; I’m not usually someone enjoys puzzle games, so to have come out of the experience that is Hue, having enjoyed myself, is definitely something to take note of.

Hue is available on PC, PS4, Xbox One and PS Vita. We reviewed the PS4 version.